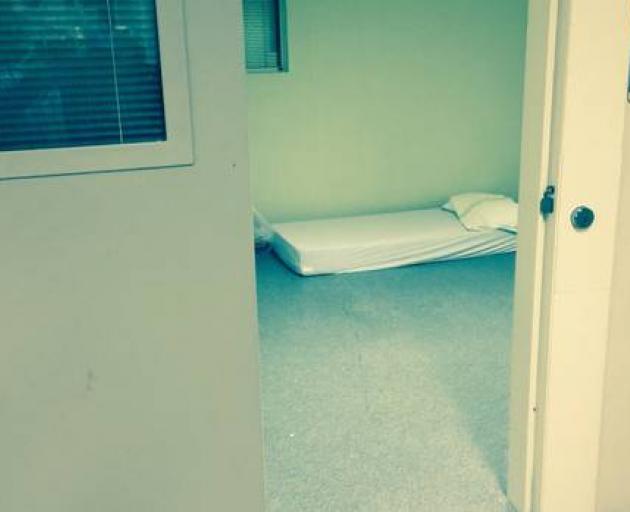 An example of a standard seclusion room at a government run mental health facility. A patient at Southern DHB was stripped naked and left in a room with only one blanket. Photo: supplied via NZ Herald
A teenage girl who was stripped naked and left in a seclusion room with the lights on full and only a blanket for the night, says the experience was "incredibly dehumanising".

The treatment by Southern District Health Board of the girl in 2013 has been deemed a breach of her rights by Mental Health Commissioner Kevin Allan in a decision into her complaint.

The young woman, who has only been identified as Ms A, was in her late teens at the time of the treatment on November 10 that year.

Ms A had been transferred from a psychiatric unit at a public hospital to a clinic two months earlier and was under a compulsory in-patient treatment order under the Mental Health Act.

According to Allan's decision, during the previous year she suffered from a significantly depressed and anxious mood associated with repeated self-harm and suicide attempts.

On the night of the seclusion, Ms A left the clinic and was found by police and taken to a locked unit at a psychiatric hospital.

She was attended by a psychiatrist but there was no bed available on the locked unit, so Ms A was transferred to a secure unit under police restraint, as she continued to struggle.

Once at the unit at 8.30pm, the girl said several nurses held her down and forcibly removed all of her clothing, including her underwear.

She told the Mental Health Commissioner that once she was naked, staff pushed her onto the floor, left the room, and locked her in.

"It is clear that she found this treatment humiliating."

The decision goes on to show Ms A was not given a tear-resistant gown to wear. She was also not provided with a mattress or a pillow.

She was left with only a tear-resistant blanket and a cardboard bedpan.

"She said that she spent an uncomfortable night trying to cover herself with the tear-proof blanket, and was unable to sleep because the lights were left on full," the decision states.

Southern DHB told the Commissioner it was standard practice to leave the lights on to enable observation checks of patients in seclusion, however Allan noted the lights were able to be dimmed.

"There is no record that the lights were dimmed, and I accept Ms A's account that the staff left the lights on full all night.

"In my view, the lights should have been dimmed as much as possible whilst still allowing staff to monitor Ms A."

The Ministry of Health states that a person in seclusion should be allowed as much normal clothing as possible, while Southern DHB seclusion guidelines state a clinical assessment should be conducted to determine the items and clothing permitted in the seclusion room.

Although Southern DHB stated there was a risk of the patient using clothing for self-harm, there was no documentation in clinic notes or the Southern DHB notes of an assessment of her risk of self-harm, apart from the references to risk in the treatment plan.

"I note that although the room was entered twice on the morning of November 11, at 8am and 9.35am, a gown was not provided until 11am that day," Allan said.

"Southern DHB apologised for the delay in offering a gown to the girl.

The Commissioner's expert adviser, mental health nurse Dr Anthony O'Brien, advised it was not reasonable that Ms A was not provided with a gown, mattress, or pillow.

"Apart from having to endure the discomfort of sleeping on the floor with no support for her head, it is undignified for anyone to be deprived of all clothing," O'Brien said.

O'Brien said instead of 10-minute observations the staff could have dimmed the lights, given the girl a gown and proper bedding and monitored her continuously if they were so concerned.

He said it was hard to imagine how a mattress and pillow could be considered a risk.

"Even in such adverse circumstances care can be provided with sensitivity, respect, and dignity. Even under conditions of coercion consumers will appreciate attempts to provide care respectfully.

"Of all the learning that can be taken from this incident, the point that would make the most immediate impact on [Ms A's] experience of care is the simple provision of every day comforts."

The seclusion did not end until 2pm that day.

Allan added: "I am not able to make a finding that the denial of clothing and bedding was a punitive action or intended to humiliate Ms A; however, I consider that these actions were unacceptable and unkind."

"I do accept that I presented a significant risk to myself, however I do not believe that this risk necessitated seclusion, nor the treatment that I received whilst in seclusion," the woman told the Commissioner.

"I believe I could have been managed on a locked ward without being secluded. What I experienced on that occasion was incredibly dehumanising and continues to affect me."

The Commissioner found the DHB breached the girl's right to dignity and independence, right three under the Code of Health and Disability Services Consumers' Rights.

Southern DHB agreed to provide a written apology to Ms A.

It also agreed to provide training to psychiatric hospital mental health staff on restraint, seclusion, and the Code of Rights, review its restraint minimisation and seclusion guidelines, and review the seclusion policy on what consumers should be provided when placed in seclusion, including clothing and bedding.