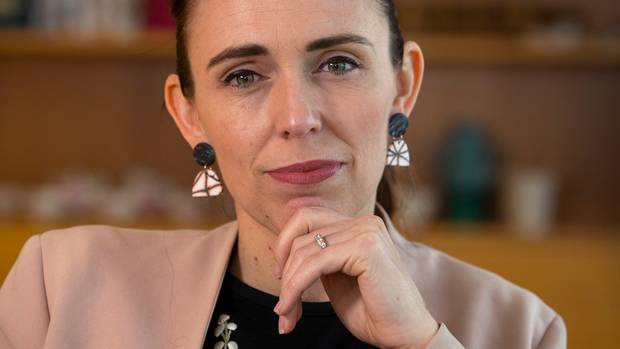 Prime Minister Jacinda Ardern. Photo: NZ Herald
The identity of the anonymous person behind the "Turn Ardern" movement can be revealed - he's a 66-year-old bricklayer from Canterbury who doesn't think the Prime Minister is doing her job.

Colin Wilson is behind the Coltheman1 Twitter account that has served as a rallying cry for those voicing opposition to Jacinda Ardern through entering news agents and bookshops to turn around magazines and books featuring her face.

Wilson has been a Twitter member for nine years and made more than 70,000 tweets from his account since.

"The normal person can make a difference on Twitter - like with Turn Ardern, from an old bricklayer from Canterbury," he says.

Wilson said he belonged to no political party, had previously been a member of the National Party yet voted Labour during the 1970s.

While he wasn't able to spell out exactly what Jacinda Ardern's job should be, he was able to point to those practices that irritated him.

"What it is, really, is a lot of us feel she spends a lot of time doing photo shoots instead of running the country."

Wilson has been dubbed "Team Leader" of the movement, which has seen people posting videos of themselves to his Twitter account turning books - and a recently released book - backwards on the shelves.

"I actually came up with the idea, that if I see it, to turn the magazine around." He said the plan was to drive down sales of magazines with the intent of discouraging their coverage of Ardern so as to free up more time to work.

He recently told his 1788 followers: "I am so proud of all our operatives that give freely of their time to ensure that the public are not subjected to all these photoshopped pictures of someone we don't even know masquerading as our PM. To say nothing of the bulls*** in the story behind the covers.

In an interview with the Herald on Sunday, Wilson said the focus on his Twitter feed and success of "turn Ardern" had surprised him.

"I never expected the term 'Turn Ardern' to get as big as it is, or for people to report back to me. But they seem to have put me on a pedestal (as) Team Leader"

Wilson didn't have a clear job description for the role of Prime Minister. "She should be leading the country and solving all these problems." The coalition leaders - NZ First's Winston Peters, Labour's Jacinda Ardern and James Shaw from the Green Party. Photo: NZ Herald
Wilson's string of complaints about Ardern highlighted behaviour not dissimilar to that embraced by John Key during his years as Prime Minister.

The smorgasbord of complaints include many commonly aimed at Ardern by political critics on social media, including accusations of not turning up for Parliament, indulging in media appearances, apparently excessive travel abroad and making public relations-friendly visits in the community.

Key also appeared on magazine covers (in one case embracing a puppy), skipped most Thursdays at Parliament, travelled abroad as much as Ardern, indulged extensively in social media stunts - not something Ardern has done - and found profile in most encounters that took him out in public.

To which Wilson says, that may be so - but at least, in his opinion, his government worked.

"Key got a lot of flak for having money, for having property - but now the shoe is on the other foot, people are suddenly concerned about a minimum wage worker having to turn magazines (back) around."

When pointed out Ardern had yet to tell radio audiences if she urinated in the shower - as Key had done - Wilson said he would "prefer not to know about those things".

Ardern also cops criticism from Wilson and supporters for the empathetic response shown to the March 15 massacre at two Christchurch mosques and the Whakaari/White Island tragedy.

It was "get Cindy to give her a hug", said Wilson - as Key did when meeting people after the Christchurch earthquakes.

Wilson said the term "Cindy" wasn't one he commonly used. "It's used by a lot of people on Twitter." He said he preferred "Prime Minister".

Recent tweets from Wilson's account use the name "Cindy" - a pejorative nickname created by opponents - with none from him referring to Ardern as Prime Minister.

Wilson was yesterday coming to terms with his identity being uncovered. "I've had MPs, media, direct message saying 'who the hell are you?'. I've said, 'you wouldn't believe me if I told you."

He said he had stayed anonymous partly to preserve mystery and "shock value". "A lot of my tweets are for shock value. I'll tweet then I'll go back to check the reaction."

It was helped protect him from expected abuse. "A lot of the lefties can be pretty bloody poisonous," said Wilson, who recently tweeted a picture of a horse trailer, saying it was Ardern's Christmas parade float.

Wilson said he believed the government was getting an easy ride from media. "We're not getting the truth out of journalists."

He cited as evidence commentary heard from callers to talkback radio during the day not eventuating into stories on the evening news or news sites.

He said he enjoyed Twitter enabling contact with others outside his usual world, although was frustrated journalists did not report stories he suggested they should. He said he had also been blocked by most Green, Labour and NZ First politicians who did not respond to his questions.

It is unclear if Wilson was looking for serious engagement. He tweeted on Friday: "Well, my lovely twitter buddies, it's been another great day of triggering the lefties."

A spokesman for Ardern said she wasn't bothered but had spared a thought for those working in supermarkets - as she had done - spending time turning magazines back around.