0 Comments
A supermarket manager who was stabbed four times after confronting a knife-wielding attacker has been hailed as a hero by his mate.

As he and the three other victims recovered from their harrowing ordeal in hospital yesterday, further details of courageous, life-saving acts have emerged in the wake of stabbing spree in Dunedin.

Twenty-four hours after the Countdown Dunedin Central became a crime scene, police were still trying to determine what caused a 42-year-old man to allegedly stab four people on Monday afternoon. 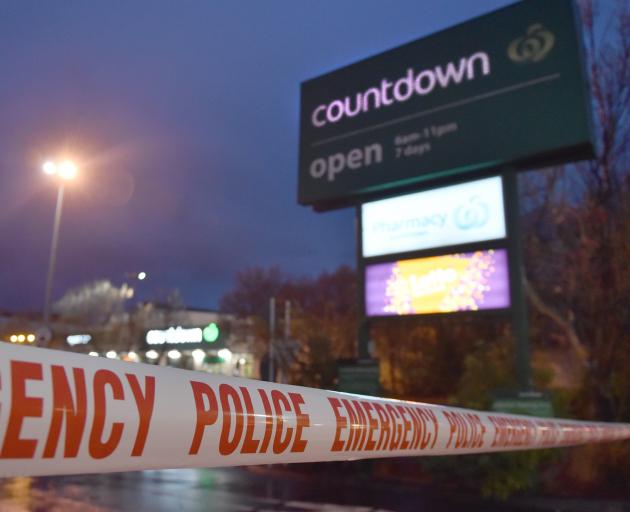 Countdown Dunedin Central will remain closed today. PHOTO: GREGOR RICHARDSON
The victims, who the Otago Daily Times has decided not to name, were stabbed as they tried to restrain the man.

All four remained in hospital yesterday, among them a Countdown manager.

A long-time friend of the man was not surprised to hear his friend had put himself in harm’s way to protect others.

Rob Campbell, who now lives in Australia, said he had known him for more than 20 years and called him “a good fella”.

“[He] went in after he heard the screaming and then tried to take control of it and it’s turned pear-shaped,” Mr Campbell said.

When asked whether the man was the selfless type, he was unequivocal.

“For sure, especially if women were being attacked.”

Mr Campbell said the manager was a devoted father of two, had a great sense of humour and was “cricket mad”.

He said it spoke volumes that when they messaged yesterday, the man seemed more keen to find out what his friend had been up to than discuss his own plight.

“He’ll be wanting to catch up for a beer soon,” Mr Campbell said.

It was also revealed yesterday that two police officers, one of whom was off-duty, were at the supermarket when the incident began and stepped in.

"Other staff were on scene very quickly and feedback indicates they provided a high standard of first aid that almost certainly saved the lives of some of the victims.

But he did not want to single them out above others who also stepped in.

"They were part of a group of human beings that intervened to support other people that were being attacked."

The defendant appeared in the Dunedin District Court yesterday where his lawyer confirmed there were no formal mental-health reports sought.

The man, who was of no fixed abode according to court documents, faces four charges of attempted murder.

He presented wearing a white smock, bare-footed with a white plaster on his right forearm.

He stood with his head bowed in the dock, only looking up when the judge addressed him.

Judge Peter Rollo granted the order and remanded the man in custody.

The issue of name suppression would be revisited at the next hearing, the court heard.

Supt Basham said police were still trying to establish the motive for the attack, but it was still believed to be random.

The defendant, sources told the Otago Daily Times, had spent a lot of time in and around the central Dunedin supermarket.

Supt Basham declined to go into detail about weapons, but reassured the public they no longer needed to worry about the location of knives used in the attack.

Southern District Health Board emergency department clinical director Dr Richard Stephenson said all of the victims remained in hospital yesterday afternoon — three in a serious but stable condition, and one in a moderate condition.

All four had required surgery.

The son of one of those stabbed in the supermarket attack said his mother had suffered wounds to her face and arms.

He spent all of Monday by her bedside and described the knife wounds as “pretty bad”.

The man told the Otago Daily Times he understood his mother had been blind-sided during the incident but had been unable to confirm the exact sequence of events.

He said he was struggling to take it all in and his siblings felt the same.

Anne Coulthard, another friend of the Countdown manager, told The New Zealand Herald she had worked alongside him at the beginning of his career in the late 1990s.

"I have seen and watched him grow from a young teenager to a wonderful store manager. And always looked forward to seeing him when I shopped there. We often laughed about days past when he was so much younger."

Ms Coulthard said it was a sad day when such a tragic event happened in Dunedin.

One person who was not at the scene during the attack was Peter Barron. Monday was his first day in the role of manager of the pharmacy within the store, but he was supposed to be spending his first week in Invercargill.

Instead, yesterday he drove back to Dunedin to support his staff.

He was impressed with how Countdown had handled the incident with empathy.

"It’s been very traumatic for everybody."

It also emerged yesterday one of the victims was a Corrections officer.

In a statement, Corrections Southern regional commissioner Ben Clark said their focus was on ensuring the staff member, their family and colleagues had all the support they needed during "this stressful and difficult time".