One of New Zealand's most iconic travel destinations has been shown off in a rather unique yet spine-tingling fashion thanks to two brave skateboarders.

Viewers from around the world have been left stunned by New Zealand skater Levi Hawken and his downhill skateboarding antics after a hair-raising ride down one of the country's more beautiful yet dangerous stretch of roads.

Hawken and a group of friends were visiting Fiordland taking in the incredible scenery.

But with international tourists no longer in the country, it means the roads near Milford Sound are nearly deserted.

This gave Hawken and his crew the chance to turn the steep and windy stretch of highway into a makeshift track.

Dwarfed by the mountainside, Hawken posted a video of their thrilling ride where they hit high speeds around tight corners while showcasing the country's picturesque scenery.

"Haven't been replying to my emails much lately. This might explain why," he said, referring to the video.

"The lack of tourists and a dry spell made this usually impossible to skate road in Milford Sound in the South Island of Aotearoa a goer." 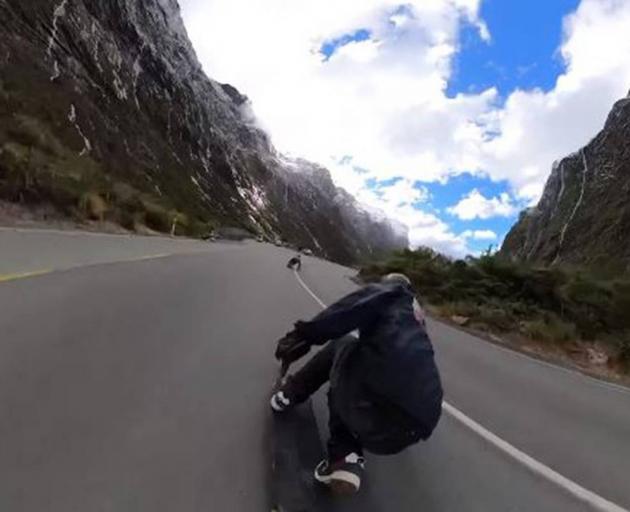 One of New Zealand's most iconic travel destinations has been shown off in a rather unique yet spine-tingling fashion thanks to two brave skateboarders. Photo: Levi Hawken / Facebook

With snow still on the mountains and a cliff to the edge of the road, Hawken and another rider were filmed weaving between potholes while gathering incredible speeds downhill.

For the majority of the ride, they had the road to themselves with the pair keeping to the left as they hit their natural downhill slope at speed.

The couple passed a couple of cars and a tour group stopped on the side of the road.

Hawken said on social media they reached speeds of up to 70 to 80kmh during their ride.

The footage left viewers around the world in awe of both Hawken's skill and the scenery.

"That landscape is sooo beautiful!!! Wow man!" one person wrote.

Another said: "That is some incredible footage! You guys have big brass ones."

While it is legal to skateboard on New Zealand roads, a New Zealand Police spokesperson told the Herald they encourage skateboarders to follow the road rules and ride to the conditions.

"The message from police is that skateboard users must operate safely and responsibly, and follow the road rules just the same as any other road user.

"If road users witness risky or dangerous behaviour on the roads, they are encouraged to contact police immediately so it can be followed up. We would also encourage users to use safety helmets and gear."