Hamish Clark: No one should have to pay full rates to endure Christchurch's foul-smelling stench

0 Comments
OPINION: Nothing beats a great day in Christchurch near the beach - except for the stink in the air out east.

On Monday afternoon, windows down, I drove towards the seaside suburbs of New Brighton, Mount Pleasant, and Sumner for some fresh air and more importantly to get a sniff of the stink that has hit the headlines.

Bromley is ground zero and in the news with a triple whammy of a pong.

No ram raids here, just a raid on local's nostrils by a wretched stench, and the residents have had enough.

The eastern suburbs have coped more than their fair share of heartbreak - earthquakes, liquefaction, and now the putrid smell of the oxidation ponds, the burnt-out wastewater treatment plant, and the city's giant compost heap.

As I got closer the foul air started to waft into the car and swirl around the interior.

Suddenly it made me cough and my eyes water.

It was horrendous and disgusting. I almost threw up.

The wastewater treatment plant's damaged roof after the fire. Photo: Christchurch City Council
It smelt like a stinky old toilet block that had backed up for months and never been cleaned.

As the sun shimmered off the poo pond water on the causeway in 25C heat I couldn't believe people were driving with their windows down, cyclists riding without a mask, and a motorcyclist cruising along with the bottom of his helmet up - all sucking in the putrid air.

Some days it washes over the whole city as far as the airport, which is more than 20km away, on the prevailing northeasterly sea breeze.

I knocked at the house of a woman who lived next door to the burnt-out wastewater treatment plant.

She laughed as she opened the door, letting the malodour waft in, knowing what questions were coming next.

She told me she had lived in the wooden bungalow for 30 years and was used to the "pong", as she called it.

"It was a bit smelly last night. It comes and goes in the house and I open the windows and doors at night".

I asked why she would open the house and let the reek in? Then the penny dropped.

"You can't smell when you are asleep," she told me. "It's the best time to open the windows."

For years residents have complained about the organic plant and the disgusting smell of the city's decaying food waste.

Add to that the now disabled wastewater treatment plant which caught fire last November was used to treat the raw waste, full of tonnes of rotting organic matter.

And now the poo ponds, with undertreated sewage adding to the repulsive smell.

The city council aims to remove all the fire-damaged materials from the water treatment plant but that will take until the end of the year, while the massive compost heap is "no easy fix", according to mayor Lianne Dalziel.

One option for the council is shifting the plant but that could take six years, or they could close it altogether.

No one should have to pay full rates to endure this - including the woman living beside the burnt-out water treatment plant. 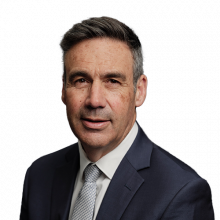 Hamish Clark.
"They will get it sorted one way or another," she said with a smile.

Despite the smell, she can still see the funny side.

"I tell my friends to keep their s**t to themselves!"