Argentina has declared three days of mourning in honour of Diego Maradona, worshipped as 'El Dios' - The God. Photo: Reuters
Diego Maradona, widely regarded as one of the greatest football players of all time before drug and alcohol addiction marred his career, died at his home in Argentina after suffering a heart attack. He was 60.

Beloved in his homeland after leading Argentina to win the 1986 World Cup and adored in Italy after taking Napoli to two Serie A titles, Maradona was a uniquely gifted player and charismatic figure.

Simply one of the greatest sportsmen of all time. RIP Diego Armando Maradona → https://t.co/A9LfAm8WdP pic.twitter.com/mNue8e6aK5

Maradona had recently battled health issues and under went emergency surgery for a subdural haematoma several weeks ago.

He suffered a heart attack at his home in the outskirts of Buenos Aires on Wednesday, acquaintances of the former player said. His death was confirmed by his lawyer. 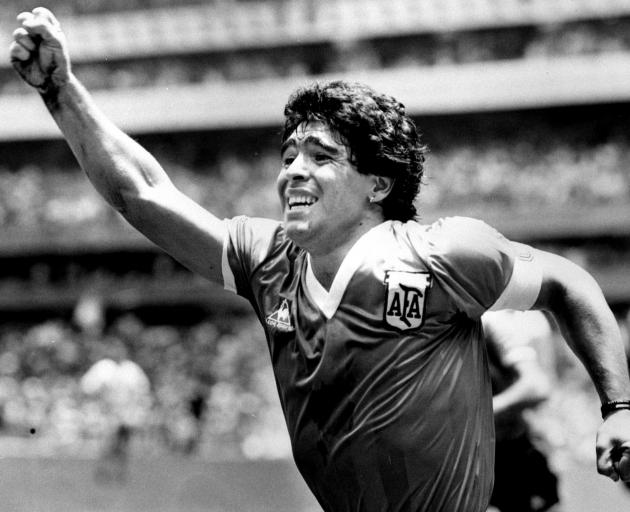 Maradona celebrates after scoring his game winning goal against England in their World Cup semifinal in Mexico in June 1986. Photo: Reuters
In Buenos Aires, people began pouring onto the streets to mourn the nation's favourite son, gathering in the San Andres neighbourhood where he lived and also in La Plata where he had lately been technical director for local team Gimnasia y Esgrima.

The Argentine government has declared three days of mourning. President Alberto Fernandez said in a tweet, "You took us to the highest point in the world, and made us immensely happy. You were the greatest of all. Thank you for having been with us, Diego. We will miss you all our lives."

In Argentina, he has long been worshipped as 'El Dios' - The God.

In the Buenos Aires suburb of Villa Crespo, the song La Mano de Dios by folk singer Rodrigo Bueno rang out from a balcony, a reference to a goal Maradona scored with his hand against England in the 1986 World Cup in Mexico.

Diego Maradona has passed away aged 60.

A look back to when @GaryLineker went to interview him about *that* moment.https://t.co/zRYIQtmFt2#bbcfootball pic.twitter.com/n29WlufFto

While that goal - and his description of it as divine intervention - was Maradona's most controversial, his second in that game, where he ran through the England team to score a wonderful solo goal, showcased his extraordinary dribbling and control that many view as unmatched.

Pele, the Brazilian footballer who is considered the only player to have come close to Maradona's skill level, was among those quick to pay tribute to the Argentine.

"Certainly, one day we'll kick a ball together in the sky above," he said in a brief statement provided to Reuters. 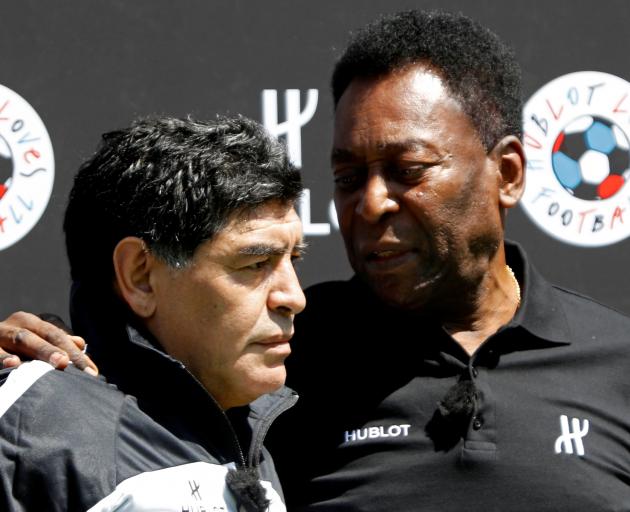 Maradona with another legend of the game, Pele, in 2016. Photo: Reuters
At club level, Maradona broke on to the scene with Buenos Aires' Boca Juniors before playing in Spain with Barcelona. He was idolised in Italy after leading Napoli to their first ever Italian league title in 1987.

He ended his playing career back in Argentina, returning to Boca. He had a brief and controversy-packed spell as Argentine national team coach from 2008 to 2010 before coaching in the Middle East and Mexico.

But years of drug use, overeating and alcoholism truncated his stellar career and altered his appearance from a lithe athlete who could slalom effortlessly through teams to a bloated addict who nearly died of cocaine-induced heart failure in 2000. 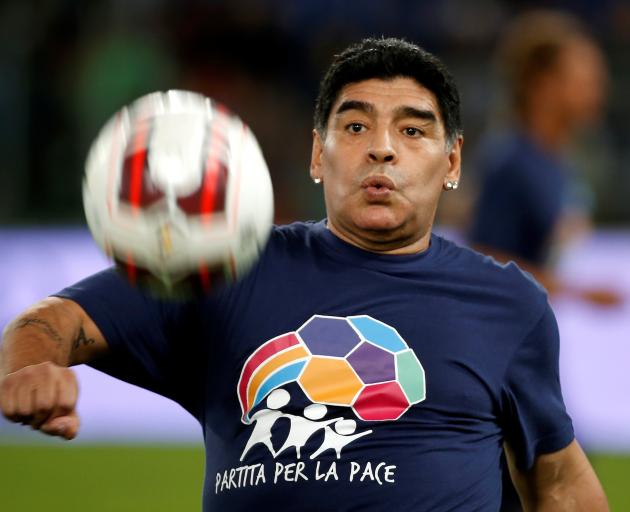 Diego Maradona warms up before the start of a special interreligious "Match for Peace" at the Olympic stadium in Rome in 2014. Photo: Reuters
Maradona became friends with Castro while receiving medical treatment in Cuba and he had tattoos of the Cuban leader and his former comrade Che Guevera. He was also a supporter of ex-Venezuelan leader Hugo Chavez.

But on the pitch he was, said Portugal's Cristiano Ronaldo, an "unparalleled magician."

"Today I say goodbye to a friend and the world says goodbye to an eternal genius," he said.

"One of the best ever. An unparalleled magician. He leaves too soon, but leaves a legacy without limits and a void that will never be filled.

"Rest in peace, ace. You will never be forgotten."