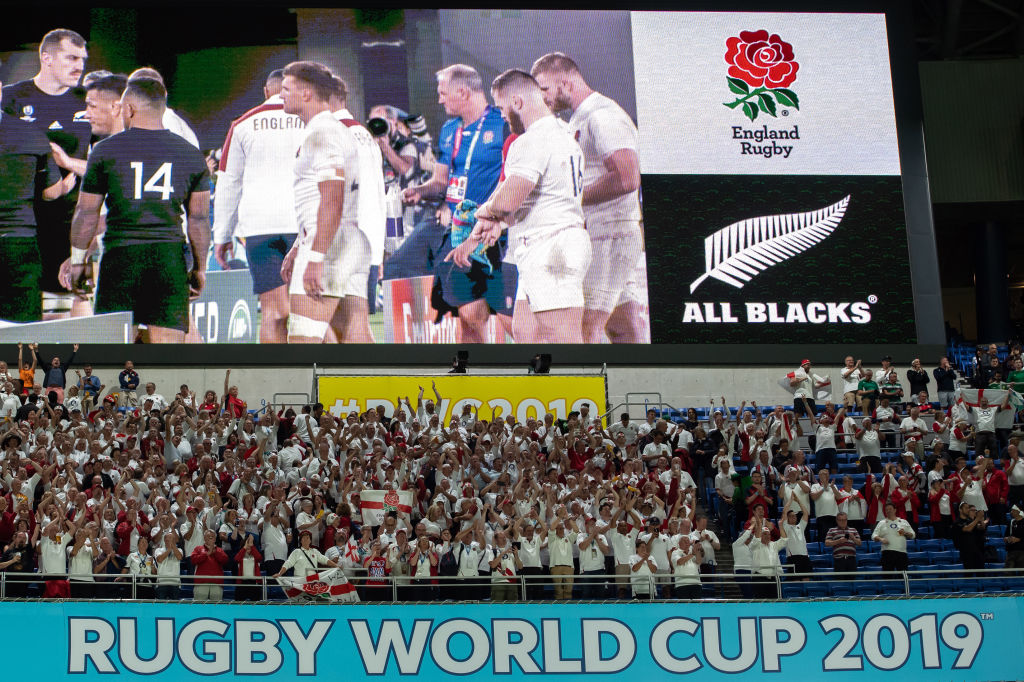 Photo: Getty Images
England rugby fans could soon be banned from singing 'Swing Low, Sweet Chariot' at international matches because of its origins as an anthem for American slaves.

The Rugby Football Union (RFU) announced on Thursday that it was conducting a review into the 'historical context' of the song over concerns it is inappropriate.

A well-placed source said: "One option after consultations is to stop this being sung at matches."

The use by the RFU on social media of the slogan "Carry Them Home" taken from the song's second line has been suspended with immediate effect, the organisation said. Official merchandise using the slogan, including on children's t-shirts, is still available for purchase pending the review.

The lyrics are emblazoned across Twickenham but with internationals scheduled for the autumn it is now probable the song will be banned by then.

In a statement the RFU accepted it needed "to do more to achieve diversity", adding : "The Swing Low, Sweet Chariot song has long been part of the culture of rugby and is sung by many who have no awareness of its origins or it's sensitivities. We are reviewing its historical context and our role in educating fans to make informed decisions."

Earlier this week Maro Itoje, the England international, expressed his concerns over the use of the song, explaining that its "background… is complicated".

"Swing Low, Sweet Chariot" was written in about 1865 by a former slave Wallace Willis and was widely adopted by the US civil rights movement a century later.

The World Rugby Museum has dated its first use by rugby fans to 1987 in support of Martin 'Chariots' Offiah, a rugby league international who played a sevens tournament at Twickenham Stadium. It was popularised the following year at an international match when the black winger Chris Oti scored a hat trick against Ireland.

Brian Moore, the former England international and Telegraph columnist, said he would be pleased if the song is banned.

"I have always hated it," he said, "It is not appropriate. It has slave connotations and if the RFU makes that ruling I would be pleased."

Moore said he could remember "Swing Low, Sweet Chariot" being sung in rugby clubs in the 1970s when he was a junior player but had no idea why.

The RFU has signed up to a pledge to tackle inequality in the sport in the wake of the death of George Floyd that prompted the resurgence of the Black Lives Matter movement.

Any attempt to ditch the anthem will upset many England fans who have latched on to the song in the last 30 years while enforcing any ban at international games will present a huge problem for officials in a sport whose fanbase is largely white and middle-class.

On social media, some supporters expressed their dismay. One wrote on Twitter: "Rugby fans won't be told what to sing. Try banning them and they'll sing it louder."

It is unclear whether Prince Harry, the RFU's patron, will be consulted. Sources have suggested the Duke of Sussex, who now lives in Los Angeles, is unlikely to become involved in any decision over its future and will leave it to the game's administrators.

Despite the RFU's review into Swing Low, Premiership leaders Exeter Chiefs will not be following suit despite previous accusations that they are "playing Indian". Exeter's emblem is a native American with a head-dress while their supporters perform the "Tomahawk chop".

Exeter confirmed to The Telegraph that they have no intention of reviewing their iconography, let alone changing. In 1999, Exeter adopted the moniker Chiefs, which is the name of the first team in a lot of Devon sporting teams.