Photo: File image
There are 1397 new community cases of Covid-19 in Canterbury today and six more deaths have been reported in the region.

There are 9173 new community cases of Covid across New Zealand today, including 164 in South Canterbury, the Ministry of Health said.

The ministry also reported another 14 Covid-related deaths, six of which were people from Canterbury.

There are 385 people in hospital with the virus, including 13 in intensive care. Forty-nine are in Canterbury DHB hospitals and three are in South Canterbury hospitals.

Of the people whose deaths were reported today, six were from Canterbury, one was from Northland, two from Auckland, one from Waikato, one from MidCentral, one from Hawke's Bay, one from the Wellington region, and one person was from the Southern region. Six were aged in their 70s, three were in their 80s and five were aged over 90. Nine were women and five were men.

More than one million cases in NZ

New Zealand has recorded a major milestone today, with more than one million confirmed cases of the virus in this country since the pandemic began in 2020.

"New Zealanders' collective response to Covid-19 helped us to keep our case numbers low, especially in that first year when the virus was rampant internationally."

Director-general of Health Dr Ashley Bloomfield thanked New Zealanders who had "played their part to keep our case numbers and rates low when compared internationally, and for continuing to do their bit to follow public health advice and minimise the spread of Covid-19."

The number of new daily cases in Canterbury also grew today to 1397 compared to 1033 yesterday and 914 on Sunday. 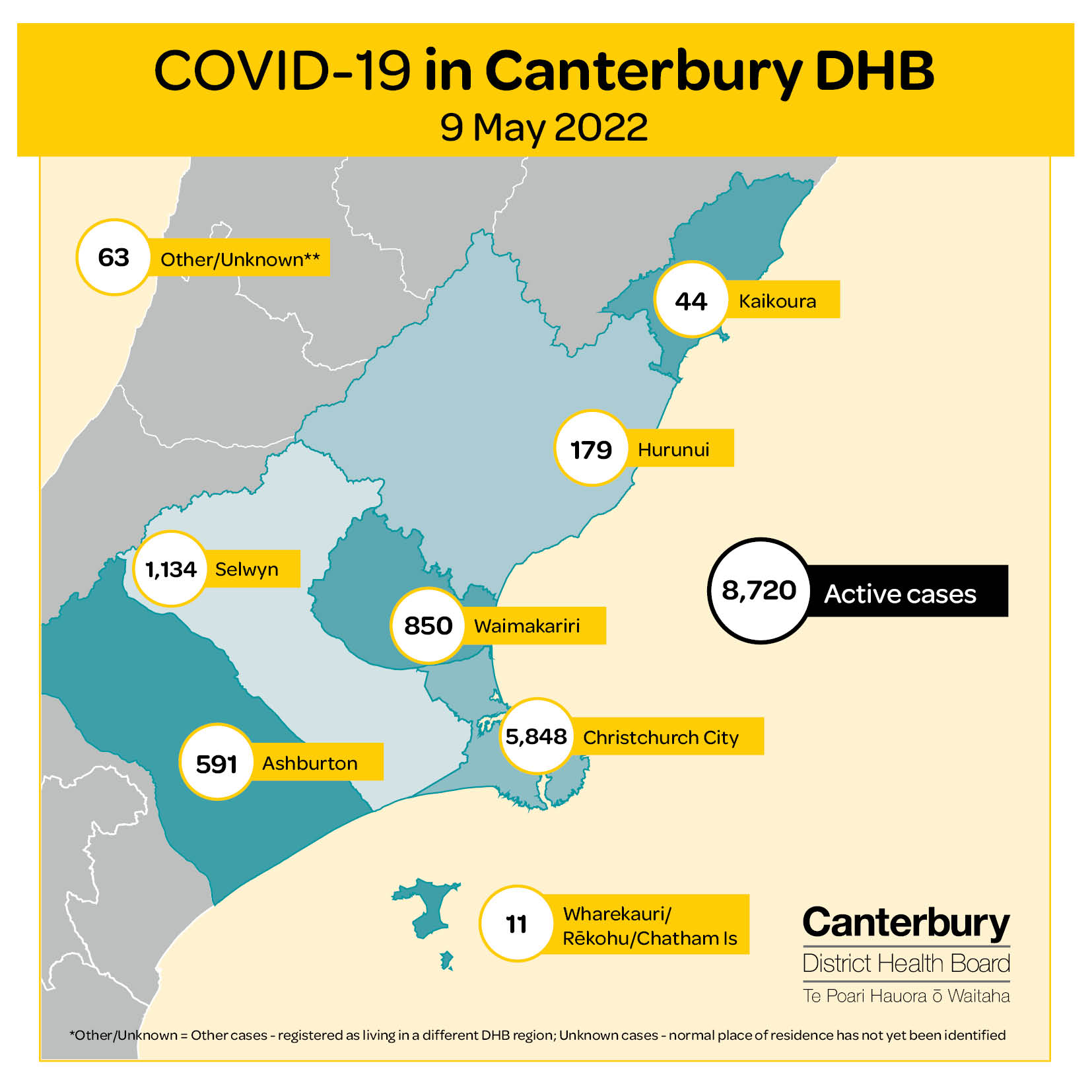 Baker told RNZ he expected case numbers to rise over the coming months, which would result in increased hospitalisations and deaths.

There are now three confirmed cases of BA.5, all of whom travelled here from South Africa.

Baker said the variant had "taken over the world".

"[In New Zealand] we saw the original BA.1 has now been replaced by BA.2, and we would expect to see more dominant - or we would say 'fitter' variants gradually take over from the ones before - this is natural selection taking place before our very eyes," Baker told RNZ.

"If a variant becomes more common ... we can say yes, it's got a competitive advantage. The other effect is whether it's more severe - but that takes a very long time to find out and there are so many factors that affect that."

Meanwhile, Prime Minister Jacinda Ardern again tested negative for Covid this morning. She is isolating at home instead of using the critical worker scheme after her partner Clarke Gayford tested positive on Sunday.

Political editor Claire Trevett yesterday said Ardern was not using the exemption scheme for critical workers because of childcare responsibilities and believed she did not need the critical worker exemption.

While Ardern has had to cancel some events – including a visit to Hawke's Bay – she could do most events and meetings remotely, including chairing Cabinet, delivering a pre-Budget speech to Business NZ tomorrow and taking part in Question Time and speeches in Parliament.

The critical worker exemption scheme allowed critical workers who were household contacts to go to work provided they tested negative each day. Businesses and workplaces needed to register as "critical services" for their workers to qualify for the scheme.