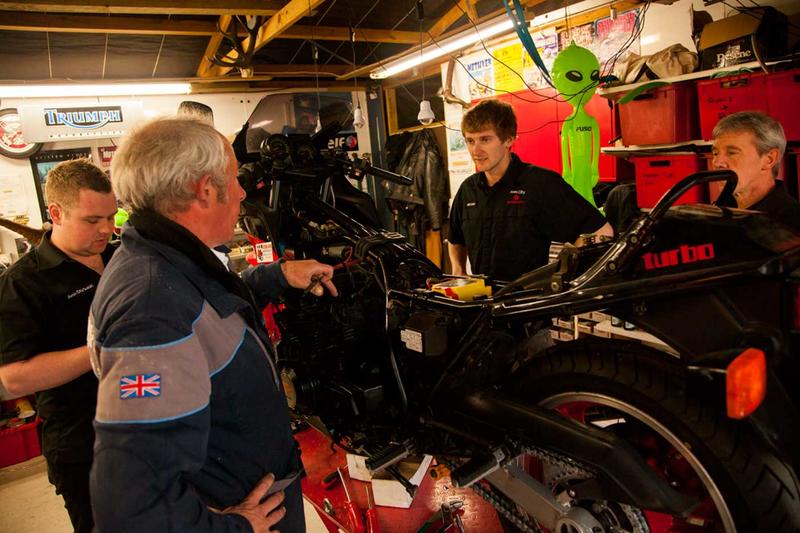 Preparing for the record attempt. Photo: Supplied via RNZ
Phil Garrett has been trying for 20 years to become the fastest person on a motorcycle in New Zealand.

And this weekend Garrett hopes to finally make this happen, on a 45-year-old Kawasaki motorcycle on a closed road in Ashburton.

Kiwi motorcycling legends like John Britten inspired him when he was growing up in London, he told Jesse Mulligan.

“They seemed to be always putting their heads above the parapet and doing things other people couldn’t do.” 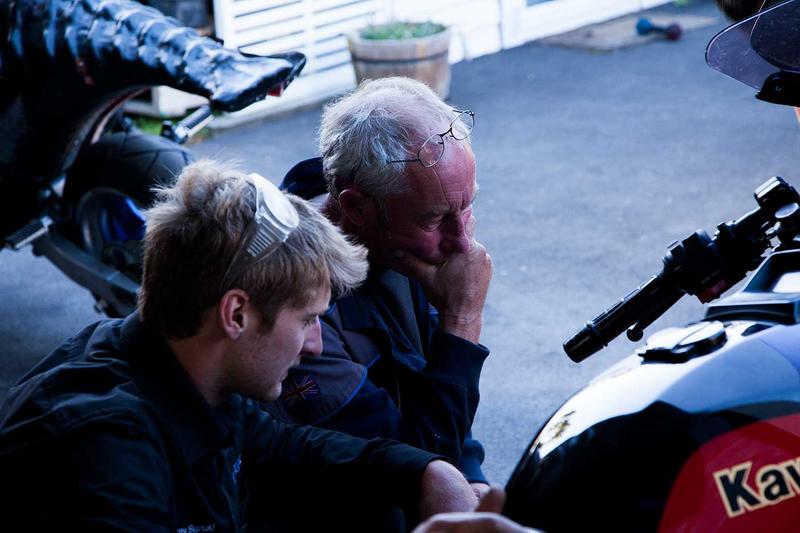 Photo: RNZ
He then married a New Zealander and came to live here over 20 years’ ago.

Garrett has pedigree riding fast, in 2005 he broke the world land speed record for a bike with a side car with team mate Glenn Hayward over a flying kilometre.

Then in 2008 he went out to the famous Bonneville salt flats in Utah and was offered a ride which he says got him hooked on riding fast solo.

“The Bonneville salt flats are the widest flattest expanse anywhere on the planet, it’s a salt lake for most of the year and for three months of the year it dries out to a hard concrete like surface.” 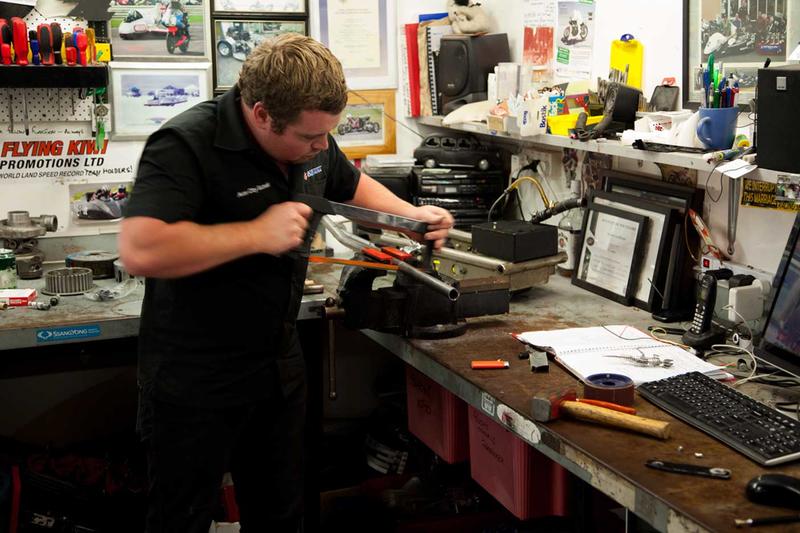 Photo: RNZ
They set out a course on the flats and bikes reach speeds of up to 0ver 600 kp/h. This where legendary Kiwi rider Burt Munroe set is record.

Garret set about building a bike to take back to Bonneville but a series of set-backs, port strikes and washouts meant it wasn’t to be.

“So, we eventually gave  up on going back to Bonneville and decided to concentrate on the New Zealand outright national record which is 307kp/h and that was set in 2000 by a guy called Johnny Hepburn in Timaru.”

Garrett and a team of over the years 250 people have built two turbo-charged bikes over the course of the last 8 years to have a shot at breaking Hepburn’s record.

They could have bought a bike “straight out of the box” he says, but that’s not the Kiwi way.

“Burt Munroe is another one of my idols and I’m conscious that I’m following in his footsteps.”

“The bike’s that we’ve got, one’s 45 years old and ones 35 years old and the technology on them is really quite straight forward but for us it is really about the challenge of taking the old bike and making it do something it was never designed to do.” 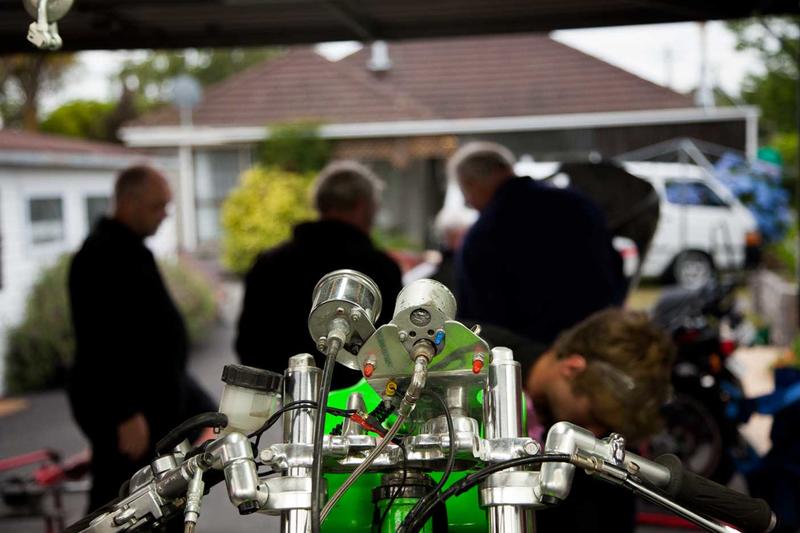 Photo: RNZ
To do that that they had to innovate and do things that no one has ever done before, he says.

“Kiwis are at their best when they are presented with what seems like an impossible problem.”

Neither bike was designed to go over 250kph so aerodynamics are critical, he says.

But they also had to increase the power in both bikes.

“We sat down and came up with the idea of a second gearbox beside the rear wheel of the bike. So we took the automatic transmission out of a BMW and took it to pieces and used the planetary gear sets that were inside it and with the help of a really clever chap called Peter Jones we fitted this into the back of the bike.” 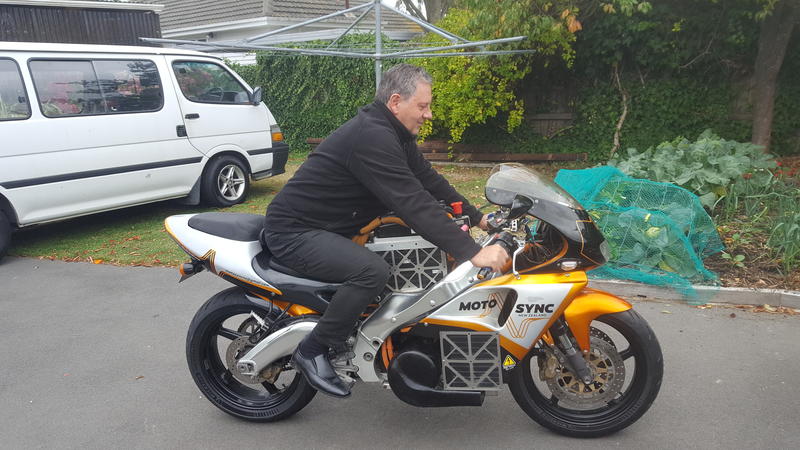 Photo: RNZ
That one simple step gave them an additional potential 140kph, he says.

Now the bikes are built and tested and everything is set for the record attempt this weekend at the outright land speed record for the flying kilometre and the flying quarter mile.

They have a 5km section of road for the attempt.

“It is as flat and wide as we can make it with no junctions, we’ve set up timing equipment in the middle 1km - 2 kms each end to speed up and then slow down and a measured km in the middle.”

He thinks they have a chance at hitting 350km/h flat out.

This clearly brings with it risks.

“We’ve made it as safe as we can we’ve done everything we can to make the bike safe.”

He says locals have been shooting rabbits for the last couple of weeks to try and bring the numbers down, they got bird scarers lined up and people have been sweeping the road.

But it is not possible to eliminate risk, he says.