Rolleston Industrial Holdings has applied for resource consent to build the centre on 18ha of land north of Jones Rd, near IPort.

To be called The Station, once built it would be one and a half times bigger than Tower Junction in Christchurch, said Rolleston Industrial Holdings director Tim Carter.

"We have applied for resource consent from Selwyn District Council to establish The Station, a large format retail development with other commercial activities, buildings, car parking and landscaping," he said.

Carter said the name of the proposed retail centre was chosen to acknowledge Rolleston’s early history as a railway terminal. 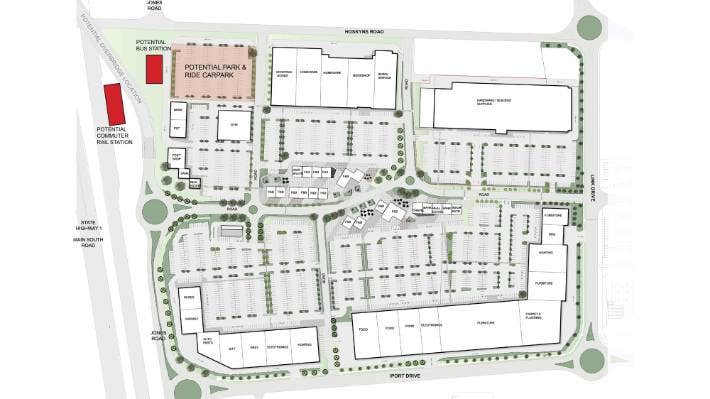 "Large format open centres have become a lot more popular in the last five years because of ease of parking as you can park at the front door of the shops.

"They are also destination centres," he said.

"The Station is well placed to meet the needs of the Selwyn district, which is one of the fastest growing districts in the country.

"It will also draw people from the rest of the South Island, as well as Christchurch."

Carter said The Station will generate a lot of vehicles, cyclists and pedestrians, which must be considered by Waka Kotahi NZ Transport Agency as it seeks feedback on a straight flyover connection between Rolleston and the surronding industrial areas.

He said the original skewed option, previously proposed by Waka Kotahi, provided a much more accessible overbridge, caters for growth in traffic to and from The Station and accommodates a range of transport options for people of all ages and abilities.

The Station will provide onsite parking for 1906 vehicles, including 71 mobility bays, and 181 cycle parks.

It is expected The Station will include a wide variety of retail and other amenities, including hardware and building supplies, furniture/homewares, sportswears, fashion and accessories, restaurants and cafes.

Carter said the resource consent is expected to be approved within one to two months.

He said the activities are permitted by the zoning and resource consent is only required in respect of minor earthworks, waste management and access design matters.

Once resource consent is granted work will start in 2023, he said.