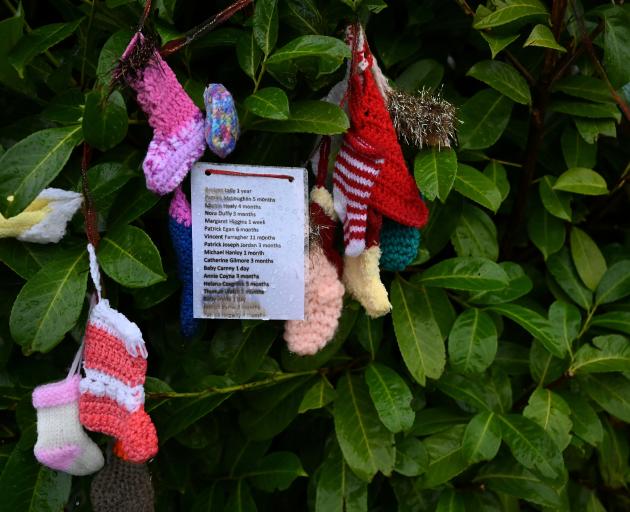 Some of the victims names hang from a tree at a graveyard where the bodies of 796 babies were uncovered at the site of a former Catholic Church-run Bon Secours Mother and Baby Home, in Tuam. Photo: Reuters
Irish Prime Minister Micheál Martin has formally apologised for the state's "profound failure" in its treatment of unmarried mothers and their babies in a network of Catholic Church-run homes from the 1920s to the 1990s.

A government-commissioned report published on Tuesday found an "appalling" mortality rate of around 15% among children born at the homes, reflecting brutal living conditions. About 9000 children died in all.

The survivors showed great bravery in sharing their stories.

The Government is now focused on a comprehensive implementation of the recommendations in this report. pic.twitter.com/zF904LrvIE

"On behalf of the government, the state and its citizens, I apologise for the profound generational wrong visited upon Irish mothers and their children who ended up in a Mother and Baby Home or a County Home," Martin told parliament on Wednesday.

"I apologise for the shame and stigma which they were subjected to and which, for some, remains a burden to this day," Martin said. "The state failed you."

The report detailed how many infants were taken from mothers and sent overseas to be adopted, while a number of children were vaccinated without consent.

Anonymous testimony from residents compared the institutions to prisons where they were verbally abused by nuns, while women suffered through traumatic labours without any pain relief.

Relatives have alleged babies were mistreated because they were born to unmarried mothers who, like their children, were seen as a stain on Ireland's image as a devout Catholic nation. The inquiry said those admitted included girls as young as 12.

The head of the Irish Catholic Church on Tuesday "unreservedly" apologised for its role.

The religious order that ran a care home for unmarried mothers in the Irish town of Tuam, where almost 800 children died, on Wednesday said the order "did not live up to our Christianity when running the Home."

Thousands of infants died in Irish homes for unmarried mothers and their offspring mostly run by the Catholic Church from the 1920s to the 1990s, an "appalling" mortality rate that reflected brutal living conditions.

The report, which covered 18 so-called Mother and Baby Homes where over decades young pregnant women were hidden from society, is the latest in a series of government-commissioned papers that have laid bare some of the Catholic Church's worst abuses.

Around 9000 children died in all, the report found - a mortality rate of 15%. The proportion of children who died before their first birthday in one home, Bessborough, in County Cork, was as high as 75% in 1943.

Anonymous testimony from residents compared the institutions to prisons where they were verbally abused by nuns as "sinners" and "spawn of Satan." Women suffered through traumatic labours without any pain relief.

One recalled "women screaming, a woman who had lost her mind, and a room with small white coffins".

The head of the Irish Catholic Church unreservedly apologised to survivors and praised their determination to bring to light "a dark chapter in the life of Church and society."

Relatives have alleged the babies were mistreated because they were born to unmarried mothers who, like their children, were seen as a stain on Ireland's image as a devout Catholic nation. The inquiry said those admitted included girls as young as 12.

Government records show that the mortality rate for children at the homes where 56,000 women and girls, including victims of rape and incest, were sent to give birth, was often more than five times that of those born to married parents.

"The report makes clear that for decades, Ireland had a stifling, oppressive and brutally misogynistic culture, where a pervasive stigmatisation of unmarried mothers and their children robbed those individuals of their agency and sometimes their future," Children's Minister Roderic O'Gorman said.

The government said it would provide financial compensation and advance long-promised laws to excavate some of the remains and grant residents, including many adoptees, greater access to personal information that has long been out of their reach.

A coalition of survivors' groups said the report was "truly shocking", but it had mixed feelings because it did not fully account for the role the state played in running the homes.

"What occurred was but an aspect of the newly established State which was profoundly anti-women both in its laws and in its culture," the group said, and described Martin's statement that Irish society was to blame as a "cop out".

The investigation was launched six years ago after evidence of an unmarked mass graveyard at Tuam was uncovered by amateur local historian Catherine Corless, who said she had been haunted by childhood memories of skinny children from the home.

Corless, who watched a virtual presentation by Martin for survivors and relatives from her kitchen ahead of publication, told Reuters that she felt "quite deflated" for the survivors who had expected "an awful lot more" from the prime minister.

Other survivors and advocate groups criticised the inquiry for concluding that it was impossible to prove or disprove allegations that large sums of money were given to agencies in Ireland that arranged foreign adoptions from the homes.

The report found no statutory regulations were in place for the foreign adoptions of 1,638 children - mostly to the United States. Vaccine trials for diphtheria, polio, measles and rubella were also carried out on children without their consent.

The Church ran many of Ireland's social services in the 20th century. While mainly run by nuns, the homes received state funding.

"I accept that the Church was clearly part of that culture in which people were frequently stigmatised, judged and rejected," Archbishop of Armagh and all-Ireland primate Eamon Martin said in a statement.

"For that, and for the long-lasting hurt and emotional distress that has resulted, I unreservedly apologise to the survivors and to all those who are personally impacted by the realities it (the report) uncovers."

The Church's reputation in Ireland has been shattered by scandals over paedophile priests, abuse at workhouses, forced adoptions of babies and other painful issues.

Pope Francis begged forgiveness for the scandals during the first papal visit to the country in almost four decades in 2018.

While Irish voters have overwhelmingly approved abortion and gay marriage in referendums in recent years, the latest scandal has revived anguish over how women and children were treated in the not-too-distant past.