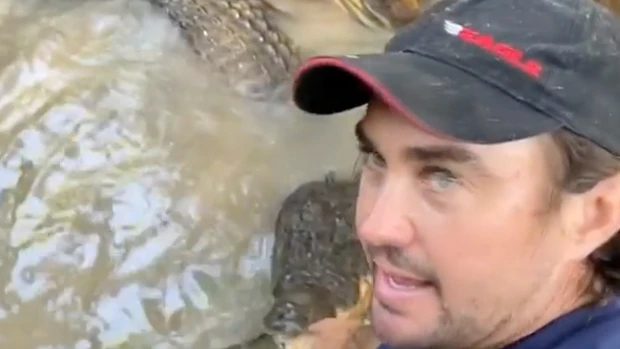 Matt Wright said that he and co-worker Tommy Nichols were clearing logs in a Northern Territory waterway when the 4m croc began tailing behind them. Photo: via Instagram
They say never smile at a crocodile. But how about pushing one away while wading in a river?

That's just what Australia's Matt Wright can be seen doing in his latest viral video.

Wright, star of National Geographic's Outback Wrangler show, shared a video called "dangerous work" with his 307,000 Instagram followers on Tuesday, showing him pushing away a 4m crocodile by the snout. 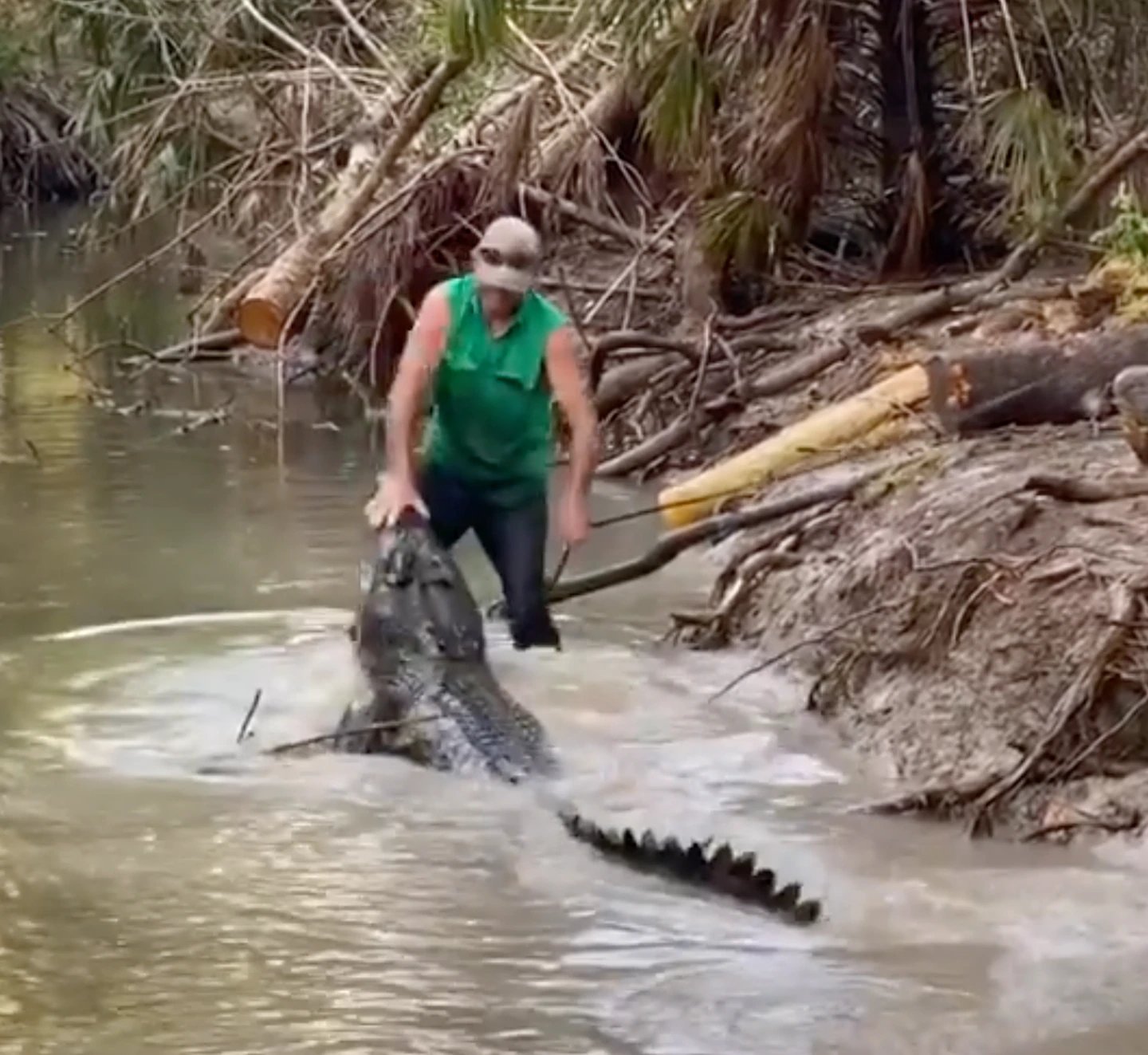 Tommy Nichols was 'having a hard time' with the 4m croc. Photo: via Instagram
Wright has a reputation as a no-nonsense Aussie conservationist who is known for his Steve Irwin-like run-ins with the local wildlife.

In the latest footage, Wright explains that he and co-worker Tommy Nichols were clearing logs in a Northern Territory waterway when the 4m croc began tailing behind them.

"We've been having a bit of a hard time, we have a little friend that has come to visit us," he says to camera as he pans to show a crocodile idling by his leg.

Wright shoves the animal's jaw away, turns his back on the animal, then wades through the knee-deep water back to help Nichols with the job.

But within seconds, the predator starts swimming back towards him.

"Give it up," he says to the crocodile, pushing its snout down into the water.

"We are trying to get some work done." 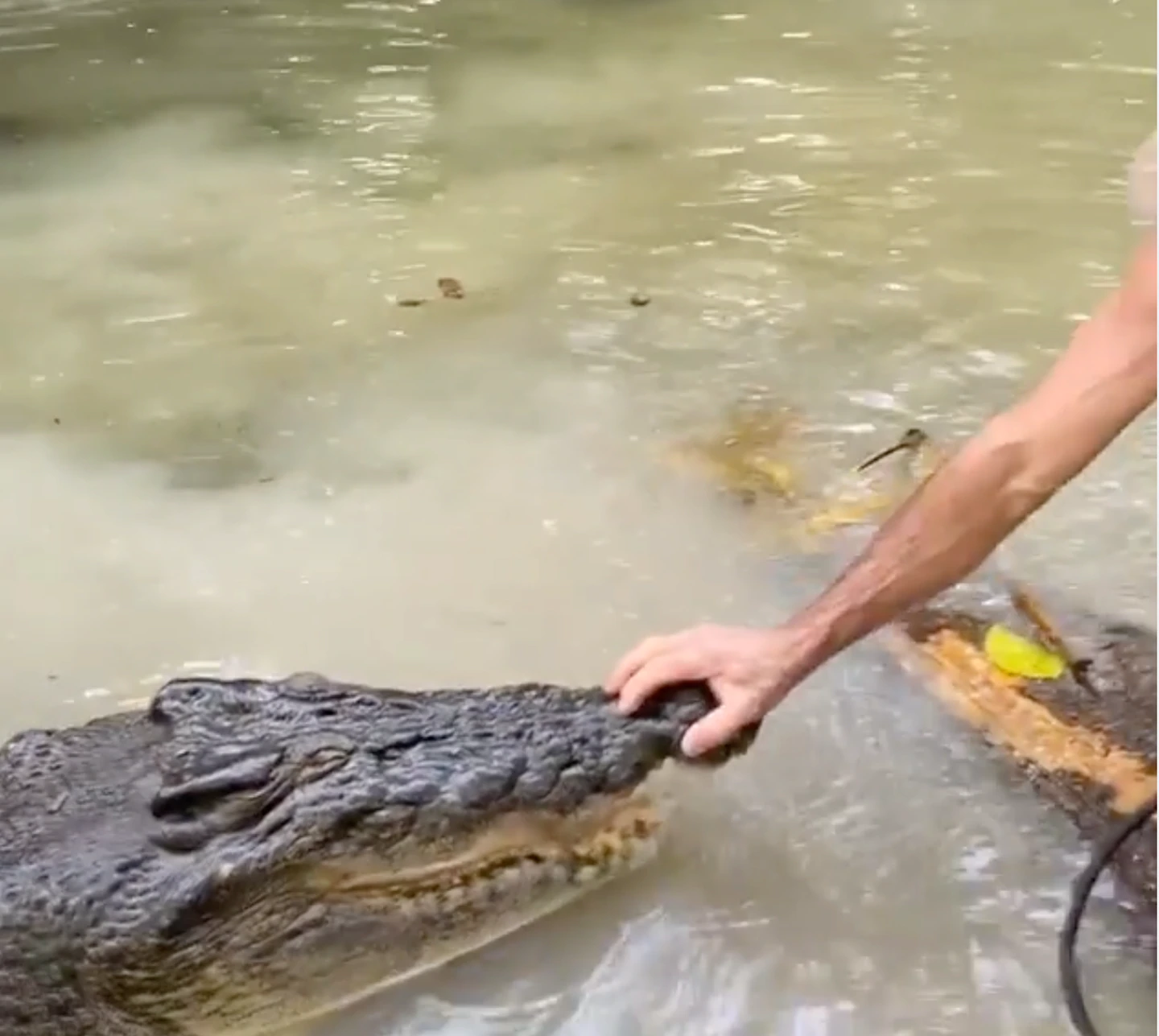 Too close for comfort? Photo / via Instagram
The pair appear mildly irritated, ordering the crocodile to stay put.

"Bonecruncher being an absolute pest wile (sic.) we're working to clear some logs in the water," Wright said in another post about the encounter.

It's not the first time Wright encountered Bonecruncher.

"He's a croc with poor self-esteem and he hangs out where the big crocs don't," Wright told NT News.

Wright said he had known the crocodile from encounters over the past seven years, and that it had become "vulnerable" after losing an eye and part of his jaw.

"Guys understand this is not normal behaviour for a saltwater croc," he told NT News.

"I've been working with crocs for over 20 years now ... and this is the first croc I've ever seen behave in this manner," he said.

"It's great to see and be part of this relationship with a wild croc, but remember that saltwater croc is the most aggressive croc in the world and are the cause of many deaths," he said.

The clip quickly went viral, with fans commenting it is the sort of thing that would "only happen in Australia".

"Welcome to Australia," one person wrote.

"This is the most Australian thing I have watched," another added.

"Australians literally give no f***s. I swat flies in America. These blokes are literally swatting crocodiles like they're puppies," a comment said.

"Can't wait until tourists see this and think Crocs are big puppies. What could possibly go wrong?"

"I'm convinced he is Steve Irwin reincarnated," one said.