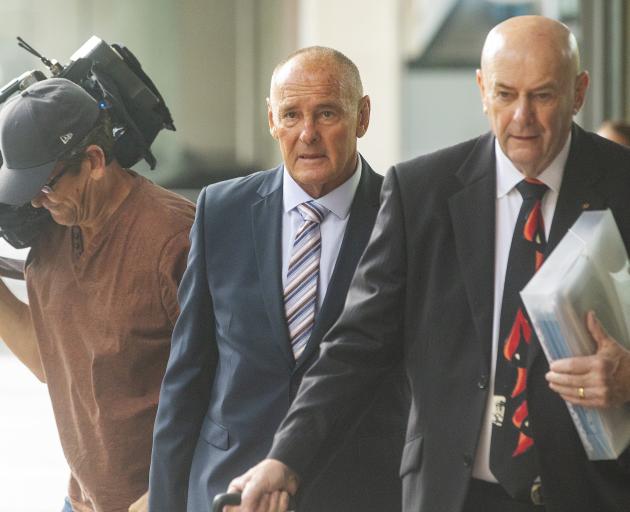 Chris Dawson (centre) is facing trial for the murder of his wife Lynette in 1982. Photo: Getty Images
Lynette Dawson made a deliberate decision to leave home in 1982 without taking any belongings to make it seem like her husband had killed her, a court has been told.

Giving evidence in Christopher Michael Dawson's Sydney murder trial on Monday, Paul Steven Cooper said he had met a woman he was sure was Mrs Dawson early in 1982 at a pub in Warners Bay, on Lake Macquarie.

Cooper claimed to have struck up a conversation with the woman who said she had left her husband and children, and was working up the courage to see her sister.

Telling the woman that the police might think she had been killed by her husband because she had left all her belongings, Cooper said he was shocked by the response.

"When I looked back at her, she had a different demeanour at that time and it shocked me because I thought that might have been the intent," he told Justice Ian Harrison.

Cooper claimed the woman was waiting for a passport and was planning to fly first to Bali and then onto another overseas country. She allegedly asked Cooper to book a motel for her because she had no identification.

Cross-examined by crown prosecutor Craig Everson SC, Cooper admitted that he had spent time in prison for possessing cannabis and heroin, armed robbery, theft, and break and enter. He had also appeared before court for breaching apprehended violence orders.

While Cooper could not remember details such as whether he had asked for the woman's name, he was adamant that he was telling the truth. His own father had killed his wife, and he would not be here defending Dawson if he thought the murder allegations were true, the court heard.

"I'm not here just to muck around. I'm here because I believe what I say."

Dawson, now 73, is accused of murdering his wife and disposing of her body on January 9, 1982 so he could have an unfettered relationship with his then teenage lover and former high school student, known as JC. He has pleaded not guilty to the charge.

Also on Monday, Justice Harrison dismissed evidence by Robert Silkman that Dawson had approached him on a busy plane flight from the Gold Coast to Sydney in 1975 to ask if he knew someone who could get rid of Mrs Dawson.

Silkman's evidence was put forward to show Dawson had specific tendencies that pointed to the murder of his wife.

His evidence was rejected alongside tendency evidence of three other witnesses Judith Solomon, KF and Roslyn McLoughlin who claimed they saw Mrs Dawson with black eyes or bruises before she disappeared in January 1982.

Closing the Crown's case, Mr Everson said Dawson had thrown up lies and smokescreens to deflect attention away from the murder.

The barrister pointed out three motives for the alleged murder: Dawson's animosity towards his wife which led to verbal and physical abuse, his infatuation with JC, and his desire to avoid the legal and financial consequences of divorce.

The timing of Mrs Dawson's disappearance with her husband's unopposed access to JC was neither serendipitous nor innocent, the barrister said.

"When the evidence is looked at as a whole the conclusion that Lynette Dawson is not only dead but that she died on or about the 9th of January 1982 is the only reasonable conclusion. And once that conclusion is reached, the evidence undoubtedly points at Christopher Michael Dawson as being her murderer," he told the court.

Suggestions Mrs Dawson abandoned the home were ludicrous because of her outlook and future plans at the time, the barrister argued.

Not only was she looking forward to one of her daughters commencing school in early 1982, but she had prepared a surprise 66th birthday party for her mother on January 30, and had commissioned artist Kristin Hardiman to take sketches of her children.

The Crown also rejected any purported sightings of Mrs Dawson in the years after her disappearance as vague, fleeting and unreliable. While some were mistakes and misunderstandings, others were outright lies, Mr Everson said.

The trial continues on Tuesday.