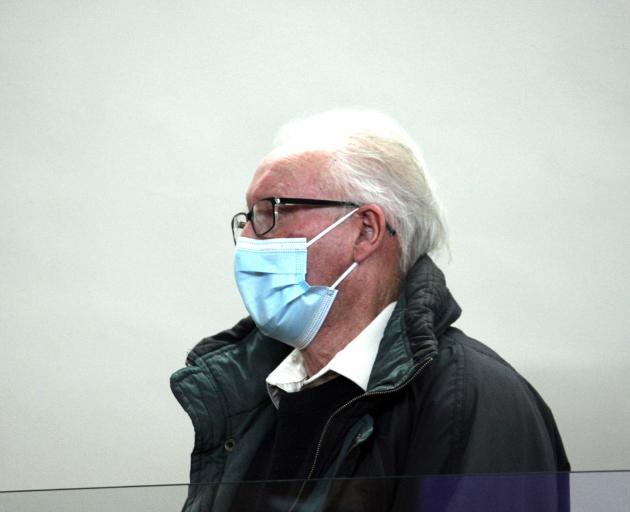 Kenneth Warren Hawkins on the day he pleaded guilty to 18 charges of possession of child expoitation images in May this year. FILE PHOTO
A 77-year-old Invercargill man who was previously convicted of child rape, was caught with child exploitation images after emailing them to himself while recovering in hospital after a stroke.

Kenneth Warren Hawkins, of Invercargill,  appeared before Judge Duncan Harvey in the Invercargill District Court this morning on to be sentenced on 18 charges of possession of objectionable material between 2011 and 2021.

Judge Harvey said of the 42 images and video, 21 were in the highest category A, 9 were category B and 12 category C.

"The 21 category A images are extreme, they are gross and they almost as bad as one could get."

Court documents show Hawkins was sentenced to 11 years' jail after he pleaded guilty to four charges of rape, twelve charges of sexual violation by unlawful sexual connection, and nine charges of indecent assault.

The police summary says it was while he was an in-patient at Southland Hospital last year that Hawkins used the WiFi to send two images from one of his email addresses to another.

The email alerted Yahoo! Inc which then passed on the information to the National Centre for Missing and Exploited Children based in the United States.

A police search warrant was executed last year at Hawkins’ Invercargill home and the majority of material was found in system files known as thumb caches and the unallocated space of a computer.

"This indicated that the defendant had taken steps to delete material and utilised applications for accessing material that may not be as readily available to our everyday computer user, all of this done in an attempt to ‘clean up after himself’," the summary states.

When questioned by police, Hawkins admitted to viewing images daily.

He further stated that he also searched the internet for stories about sex with children and admitted he had accessed the dark web for such stories in the past, the summary said.

"In explanation, the defendant used his deteriorating health as an excuse and further stated that he knew what he was doing was wrong."

However today, Judge Harvey said Hawkins had told a pre-sentence report writer the reason he looked at the images was not for sexual pleasure but instead to understand the offending that had he had experienced as a child.

Judge Harvey did not believe this explanation was true.

The offending began only a year after his parole conditions ended after serving his previous sentence for various sexual offences against children, and despite him having completed a child sex offending treatment programme, Judge Harvey said.

He described the offending as terrible and abhorrent.

"The harm that has been caused to these children is simply incalculable.

"Anything short of a term of imprisonment would simply be sending the wrong message."

His name will automatically be entered on the Child Sex Offenders Register.

The judge also ordered destruction of the images.