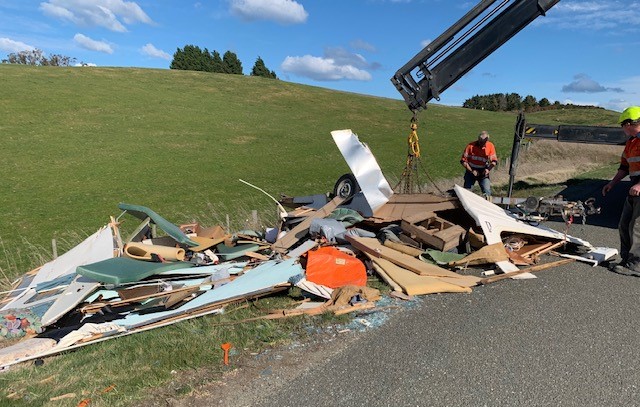 Yesterday's incident followed a roof being ripped off a Dunedin building and police are urging people to secure potential flying objects, with more high winds forecast, so they do not become "UFOs".

The caravan, being towed by a car, was hit by strong winds, pushed off the road and demolished. No one was injured in the incident.

The debris could not be cleared up immediately due to the wind strength, but would be cleaned up today when and if it was safe to do so, he said.

"With the high winds expected today, and in the future, police would like to remind motorists, particularly of those driving high-sided vehicles, or towing caravans to be cautious and drive to the conditions."

Road users should take care, as a number of state highways in Otago are affected.

Earlier on Wednesday, a roof was blown off a fire-damaged building in Dunedin, leaving debris strewn over Hillside Rd and Rankelior St.

Police were called to the scene at 1.58pm, Snr Sgt Bond said.

Fire and Emergency New Zealand staff secured the remains of the roof, and road closures were in place.

A civil engineer had since inspected the building and declared it safe, he said.

"Police would like to remind those with trampolines and other possible flying objects to ensure they are secured to the ground, so they don’t become UFOs."