Change of pace for new owners of general store 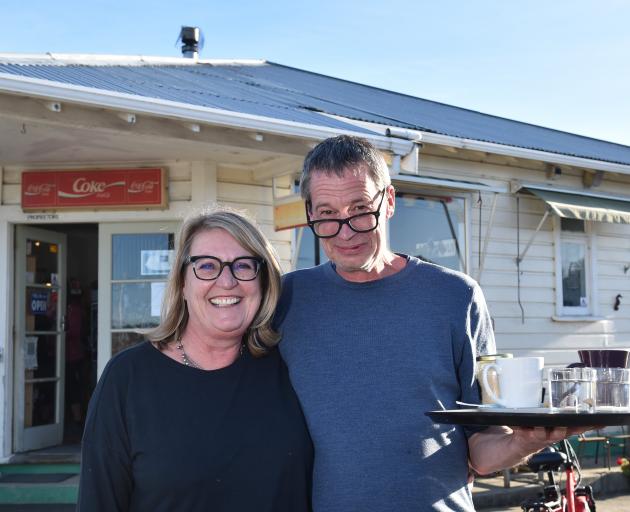 Former Arrowtown residents Cate Macdonald and Sebastiaan Bruinsma stand with a tray of coffees outside the Karitane General Store and Kitchen. PHOTO: GREGOR RICHARDSON
A 100-year-old South Island general store is being given a facelift by its new owners.

The Karitane General Store and Kitchen, which is believed to be more than a century old, is now being run by former Central Otago residents Sebastiaan Bruinsma and Cate Macdonald.

Since they took over, the shop has been dramatically tidied, four skips full of rubbish being thrown out.

New wiring, fridges and freezers had been installed and the building would soon be painted sea blue, Mr Bruinsma said.

He previously worked in Queenstown, managing the clubhouse for The Hills golf course.

The couple visited some friends in Warrington, drove out to Karitane for a coffee and decided they liked the area.

When they saw the shop was for sale at the end of last year, they decided on the sea change.

The Karitane store had a "just slightly" different clientele to the golf course where he previously worked, Mr Bruinsma joked.

"We don’t have the Aston Martins and things here," Ms Macdonald said.

In Central Otago, she sold real estate in Arrowtown and cared for her mother, who had dementia.

They were loving the change of pace, she said.

The store would be kept open all day, seven days a week, every day but Christmas.

Their best-selling products were coffee, pizza and pastries. More menu options were likely to be added.

They had no experience as shopkeepers but had jumped right into running the store without letting it close.

Ms Macdonald was unsure how old the store was but had heard it was built in 1880.

Previous owners had been getting in touch, including one who lived just down the road.

"We’re learning all the time."

The next step was learning to bake bread in their wood-fired pizza oven.