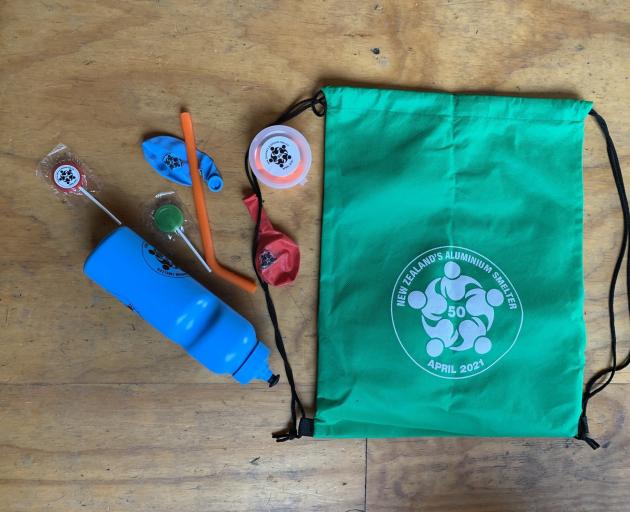 A bag full of plastic goodies was given to Bluff School students last week. Photo: Twitter/Marcus Lush
The contents of goodie bags given to Bluff school children has led to Rio Tinto's attitude to the environment being called into question again.

But the donation sparked an outcry online, viewed by many as a slap in the face from an organisation already under scrutiny for the management of waste from its plant.

Broadcaster and Invercargill city councillor Marcus Lush was outspoken about the offering, tweeting it "pretty much summed up their [Rio Tinto's] attitude to the environment and community".

Lush told the Otago Daily Times on Wednesday he was "incredulous" a maritime community that depended on fishing for its food source and income had been given so much plastic.

"I'm no Jacques Cousteau, I'm no eco warrior, I'm nothing like that. But I thought, what could've Tiwai done for the school that was worse?" Lush said.

"That was the question I found really challenging. They basically could have just given all the kids a vaping kit or something."

The post exploded with dissenting voices taking aim at Rio Tinto, and was seen by nearly 30,000 people.

Tiwai Point aluminium smelter owner Rio Tinto last week donated plastic drawstring bags to Bluff School students. PHOTO: ODT FILES
The mining conglomerate is already in the spotlight for environmental concerns related to its Tiwai operation, including how it plans to clean up its site after it closes.

Earlier this month, it was revealed there were tens of thousands more tons of toxic spent cell liner waste stored at Tiwai Point than previously reported.

Despite the backlash, Bluff School principal Geoff Folster was grateful for the gifts.

"Some of our kids don't have drink bottles, so they can reuse those. We're happy for our kids to get something," he said.

Bluff is also home to Catholic school St Teresa's, but teacher Rosi Coyle said her students were not offered anything. She thinks they were overlooked because of their environment school status.

"We wouldn't accept it and that's probably why they didn't bring it [the goodie bags] to us," Coyle said.

"The world is trying to get rid of plastic and there are alternatives. Give us something made of aluminium!"

Coyle said it had been hard to secure funding from Rio Tinto for school-related projects.

A spokesperson for Rio Tinto said it valued its relationship with local schools and the wider community.

"As well as donating swimming bags to Bluff school containing a reusable drink bottle and straw, we also recently donated $5000 for the school [Bluff School] to upgrade IT equipment and to provide breakfast and lunch for those kids who arrive at school hungry."

They were also planning to give swimming bags to St Teresa's.

On its website, the company says it regularly provides donations in the areas where it operates.