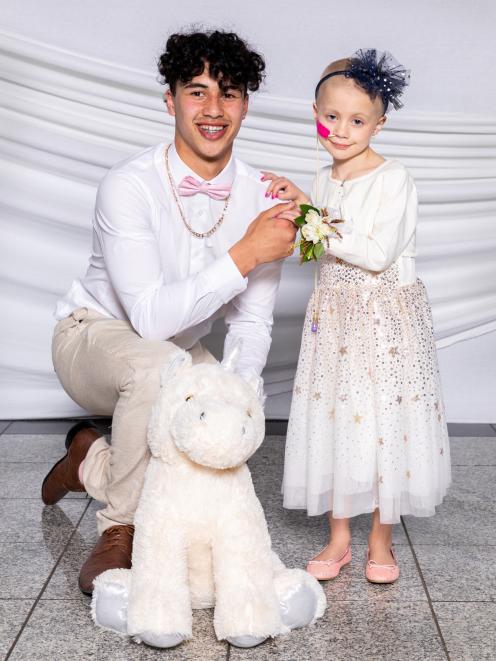 After being diagnosed with cancer in February, Brianna Steedman deserved to be treated like a princess for a night.

So, she headed to Saturday night’s ball on the arm of year 13 pupil Eli Ellison (18).

Brianna’s mother, Julia Steedman, said her daughter’s journey began when she had a BMX accident and never fully recovered.

Trips to the doctor led to a trip to the hospital, where Brianna was diagnosed with cancer.

Three months in Christchurch followed. The family learned Brianna had a large Wilms’ tumour, which affects the kidneys.

"Brianna started chemo to reduce the size of the tumour before they were able to operate and remove the tumour and kidney," Mrs Steedman said.

"There have been many ups and downs along the way but Brianna continues to take it in her stride."

Throughout her challenging year, Brianna has developed a special bond with her Opoho School teacher, Korina Ellison — Eli’s mother.

After talking it over with his mother, Eli decided he wanted to take Brianna to the ball.

"Everyone made her feel really special. She just loves dancing — that was her favourite part."

Before heading off to the formal, a special kapa haka routine was performed at the Ellisons’ home for Brianna, Mrs Steedman said.

"She really loves kapa haka and the songs ... it was a truly amazing night for her."

They were blown away with how the night went.

"The way all the students were with her, and they all took time to come and talk to her and dance with her.

"She keeps talking about it and telling everybody."