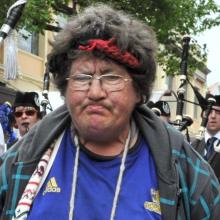 Joan Butcher
A memorial service will be held for Dunedin identity Joan Butcher when the city returns to Level 1.

Mrs Butcher died in Dunedin on Sunday at the age of 67.

Mayor Aaron Hawkins posted on social media that a small funeral would be held this week, due to Level 3 restrictions, but a memorial service would take place at Holy Name Catholic Church when Level 1 was reinstated.

She had had long-term health issues and battled alcohol addiction for many years.

She had previously lived at St Clair Park Residential Centre for several years, and was married to Hone Hawkins for more than 20 years.

Meanwhile, a change.org petition has been launched calling for a plaque dedicated to Mrs Butcher.

The page states ''Dunedinites kept her safe on her nightly adventures and in a way, she kept her people safe too''.

''People come and go from our great city, whether it be to move onto another location or it's just to explore the world. But Joan was alway a constant, ready to welcome you home with a smile and a song. The rest of the world has fancy celebrities, and Dunedin had Joan and that's what makes the culture of this city great.

''When Christchurch lost their Birdman, they remembered him by placing a plaque where he loved most, the Square. I think it is only fitting that the DCC place a memorial of Joan in our city so she can continue to be apart of Dunedin's street life and more importantly that we don't forget her." 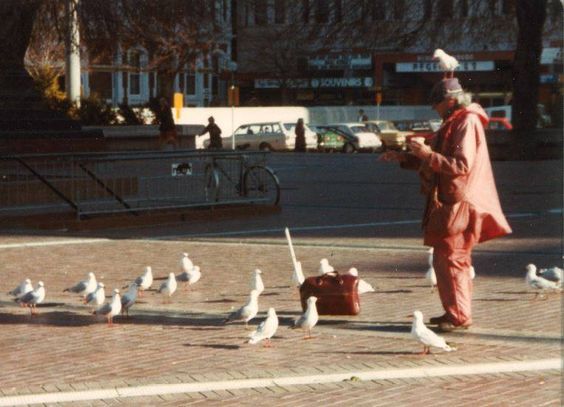 The Birdman in Christchurch in 1985. Photo: Facebook
Christchurch man Jock Orr, nicknamed "The Birdman" after befriending birds in Cathedral Square, died on July 19, 1988.

"One day should someone look at the plaque and ask, who is that? We can say, that's Joan Butcher. She was a daughter of Dunedin and a guardian of our streets.''

As of this morning, the petition had 1467 signatures.