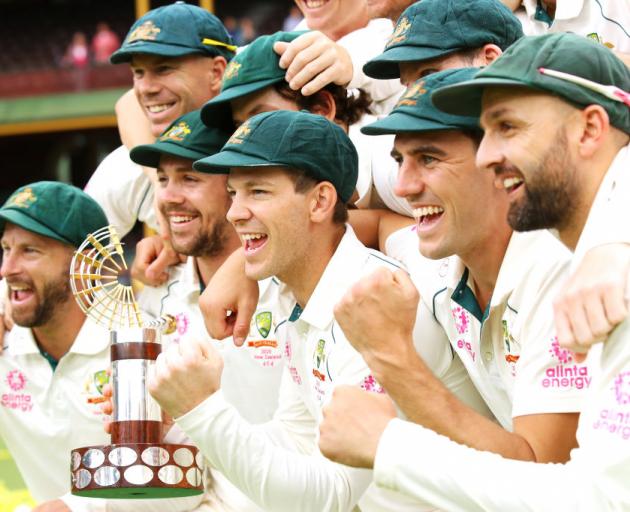 The Australian team celebrate with the Trans-Tasman trophy after victory during day four of the Third Test Match in the series between Australia and New Zealand. Photo: Getty Images

Just when you thought their tour of Australia couldn't get any bleaker, it ended on the darkest note in the third and final test at the Sydney Cricket Ground, with the Black Caps rolled for a disastrous 136, slumping to a 279-run defeat to conclude the most dire of tours, swept 3-0 by a rampant Australian side.

Clobbered with the ball, hapless with the bat and lacklustre in the field, it was a fitting finale to a dire series which has seen defeats of 296, 247 and now 279 runs, and barely an hour going by where the Black Caps could claim the upper hand.

In the first two tests, most of the blame for the Black Caps' poor performance could be lumped on the batting. In Sydney, sure, the batting was still abysmal, but on day four, the bowling wasn't much better, allowing Australia to cruise to 217-2 as they set up a declaration, and an inevitable march to victory.

David Warner brought up his 24th test century, and Marnus Labuschagne slapped another 50 as the Black Caps bowlers – either running on fumes or not up to standard – were eased around the park. Some sloppy fielding added to the malaise, and after lunch, knowing the declaration was coming, the field was spread around the rope in a remarkably defeatist fashion.

Australia were theoretically putting the foot down in order to give themselves enough time – and runs – to bowl New Zealand out, but there was no need to hurry, as what was to come was utterly predictable, as the Black Caps' top order folded.

Needing to bat for 52 overs to send the test to a fifth day – for the first time all tour – the Black Caps fell four overs short, routed for another disastrous total.

It was pure destruction, and little the Black Caps could do. Their openers could claim bad luck – Tom Blundell was removed by a stunning Nathan Lyon catch at point, while Tom Latham's lbw decision was a victim of "umpire's call", only just clipping leg stump – but the rest of the batsmen had no excuses, and no answers.

Jeet Raval's struggles against spin continued in what will likely be his final test, while Glenn Phillips' luck abruptly ran out, as both were dismissed to faint edges off the damaging turn of Lyon.

Ross Taylor produced a rare positive note when he passed Stephen Fleming to become New Zealand's all-time top test runscorer, but even that was short-lived, being bowled three balls later by another Pat Cummins peach for 22.

It looked like that would be the high point of the innings, but Colin de Grandhomme's 52 and BJ Watling's 108-ball 19 provided at least some resistance, and dragged the Black Caps past some all-time lows. They added 69 for the sixth wicket, and Todd Astle slapped a quick 17, but it was only delaying the inevitable.

While the brief rearguard suggested a chance of a fifth day, with Lyon ending with 5-50 for a 10-wicket bag, in the end, the Black Caps got exactly the finish they deserved.