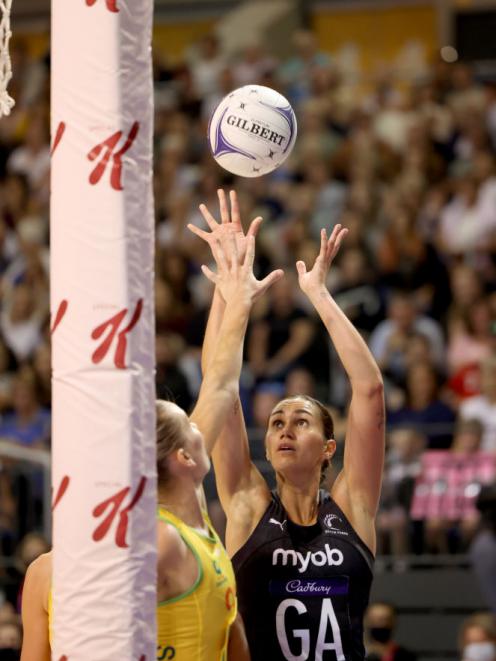 Silver Ferns captain Ameliaranne Ekenasio shoots while under pressure from Australia's Courtney Bruce. Photo: Getty Images
It wasn't pretty and it wasn't easy, but the Silver Ferns have finally reclaimed the Constellation Cup.

In another classic come-from-behind win over Australia in Christchurch, the Ferns claimed the four-match series 3-1, lifting the Cup for the first time in nine years and just the second time since the Cup's inception.

"It has been a while, not only for this group here, but everyone before us as well. We carry so much pride with us and so much goes on behind the scenes. It takes so much more than what you see here."

Although heading into the final hitout with a 2-1 series lead, the Ferns had little room for error, only carrying a goal difference advantage of +2 in the case of a 2-2 tie, and a dead heat on goal difference going in favour of the defenders.

And their prospects didn't look great early on as the Diamonds took control with a heavy focus on defence - particularly in the Ferns' shooting circle through Courtney Bruce and Sarah Klau.

The Diamonds defensive duo made difficult work for Ferns midcourters around the circle edge with captain and goal attack Ekenasio left to take on the role as the main ball-feeder to shooting partner Maia Wilson.

Back in the all-too-familiar catch-up mode, the Ferns had plenty of work to do before the break, with their quest not helped by hesitation and miscommunication causing several forced turnovers.

Shannon Saunders came on as head coach Dame Noeline Taurua's first change of the game, as Gina Crampton headed for the bench.

Saunders was better at navigating the Diamonds' defence, opening up space for Ekenasio to stay in the circle and execute a number of her signature long-range bombs. It contributed to the Ferns scoring five of the first six goals in the second quarter as they closed in on their rivals.

Getting as close as one goal, things looked positive, but a swing back in the Diamonds' favour kept the hosts at bay. By halftime, the Ferns trialled by five and were honest in admitting a lack of control had let them down.

With a fresh approach and confidence in their track record of come-from-behind victories, the Ferns stormed ahead to not only level the scoreboard but pull ahead for the first time.

Australian coach Stacey Marinkovich responded with five positional changes, slightly disrupting the Ferns' new-found flow before a buzzer-beater goal from Kiera Austin kept the visitors ahead by one.

As another thrilling final quarter commenced, goal-for-goal play set in.

Treasuring possession was key as Ferns centre Kimiora Poi patiently led the midcourt. Poi wasn't afraid to look back to the transverse line and reset when things got tricky around the circle edge.

Up on her feet, Taurua shouted to her side as they desperately searched for a turnover to pull ahead.

It came in the form of a held ball against Australia, which Wilson successfully converted to put the Ferns ahead by two and claim the match.

After an emotional team huddle, Wilson admitted there were a few tears.

"It's such a surreal moment," she said, "We haven't been able to bring the Constellation Cup home in a long time so we're so proud of ourselves. That grind in the second half was something to be really proud of.

"We know that our strength is in our unity and connections and the longer we play the stronger we get and being able to pull ourselves out of that hole is what we do best."