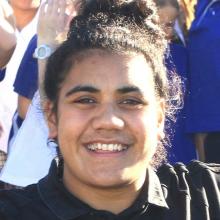 Victoria Nafatali
A Black Fern has sidestepped a conviction for drink-driving to boost her chances of playing in next year’s Rugby World Cup — on home soil.

For her to remain in contention for the women’s Rugby World Cup, which takes place in New Zealand in September and October next year, she may be called on to travel overseas for warm-up games.

The difficulties and tight time-frames organising a special visa for someone with a conviction would be detrimental to Nafatali’s chances of selection, Mr Moore wrote.

"This is a young lady who has dedicated her life, since 15, to her rugby career," counsel Ann Leonard said.

Nafatali, who was named in the 2017 tournament’s "dream team" following the Black Ferns’ 41-32 final win over England, moved home to Dunedin from the North Island after discovering a family member had been diagnosed with a serious illness, the court heard.

She had been drinking at a flat in Castle St early on May 27 when police were called to the address following an argument between her and a friend about driving.

Nafatali said she decided to move her car 50m around the corner when police arrived and found her behind the wheel.

She was found to have a breath-alcohol level of 600mcg — more than twice the legal limit.

"She was under an awful amount of stress when this happened," Ms Leonard said.

The lawyer told the court Nafatali had worked with rugby clubs during her career, developing policies to keep players safe while socialising.

Police prosecutor Dave Tod said there was no information before the court that showed a conviction would be an absolute bar to Nafatali’s rugby prospects.

"In reality, the information I have is scant," he said.

However, the judge said he had to consider the rugby player’s lack of previous convictions and the scale of her offending.

"The possible consequences outweigh the situation of her limited driving, albeit with a modestly high alcohol reading," he said.

Judge Phillips granted the application for a discharge without conviction "somewhat reluctantly".

Nafatali was ordered to pay court costs $130 and make a $300 donation to the Salvation Army.