Richie Mo'unga takes a well-earned break as the Crusaders juggle the workloads of their stars with the need to secure a convincing win over the Western Force in the penultimate round of Super Rugby Trans Tasman.

After squandering a try-scoring bonus point with a sloppy finish to the opening round clash with the Brumbies, the Crusaders need maximum points on Friday night at Orangetheory Stadium and the Blues or Hurricanes to drop points, or lose.

The Reds host the Blues on Friday night while the Hurricanes play the Brumbies in Canberra on Saturday.

Both New Zealand teams have the maximum 15 points, one clear of the Crusaders.

Mo'unga had been prominent in each of the Crusaders 12 matches this season, with the week off scheduled in advance to give Burke an opportunity to develop as a playmaker.

David Havili returns to the starting line-up outside Burke to guide him when required.

Sam Whitelock was also missing from the 23-man squad after the ageless lock came off the bench in last weekend's 54-28 win over the Waratahs in Wollongong.

Flanker Ethan Blackadder is still unavailable after being concussed against the Reds on May 22.

“The guys that have come in are excited about the opportunity,” said captain Scott Barrett, who relished former All Black Romano's input on and off the field.

“That’s the beauty of this team, Luke is a centurion at this club.

“Luke provides a lot of experience, he mentors Quinny (Quinten Strange) and the younger locks. He drives a lot of our defence. He’s always been a big part of this team.” 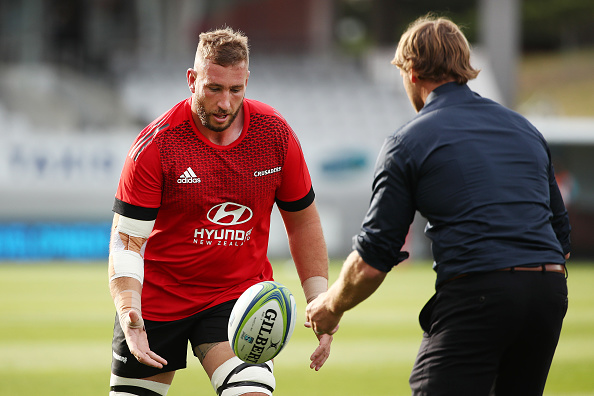 Veteran lock Luke Romano training with coach Scott Robertson. Photo: Getty Images
Barrett said the compressed nature of the competition and the need for bonus points meant the team had to approach games with three priorities.

“The first is getting the win, the second is getting the bonus point and then hopefully you have the luxury of (boosting)points differential,” he said.

Barrett conceded the players were guilty of over-exuberance against the Waratahs, particularly when deep in the only half after the break.

“The boys were excited. The easy option would have been to clear out and put pressure on the Waratahs in their half. We probably got a little bit too bullish from our own 22.”

In other fixtures, the Highlanders and Chiefs need to win against the Waratahs and Rebels respectively, while other results need to fall their way to make the June 19 final.

The Crusaders match kicks off at 7.05pm.