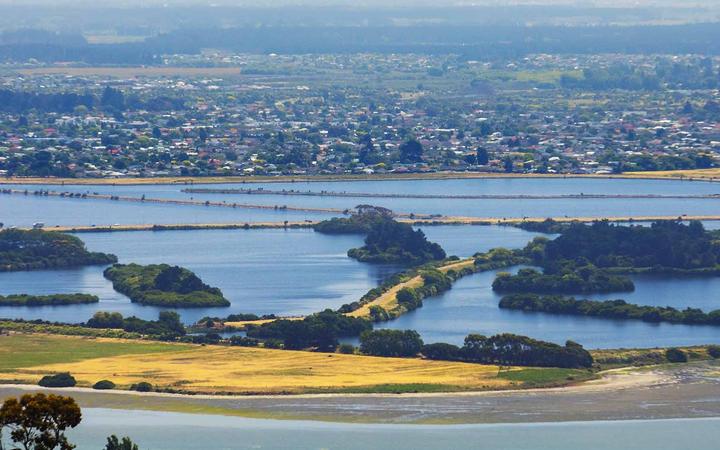 Oxidation ponds in Christchurch. Photo: Christchurch City Council/Supplied
A cause of a mysterious smell - likened to rotting fish or dead animals - in Christchurch's eastern suburbs could be pinpointed soon.

Residents have been complaining about the stench for years, but so far the cause of the smell in Bromley, Linwood and Woolston remains elusive, with authorities saying it could be a range of things such as industrial sites or the Avon Heathcote Estuary.

But pinpointing the source could be on the way, with Environment Canterbury trialling apps for residents to report the smell as soon as they catch a whiff.

Woolston resident Karyn Fallon said the smell had been around for as long as she could remember.

"It's almost like a sulfur sort of smell. It's very dependent on the wind. I'm not very good with directions but whichever way it needs to blow, if it's blowing this way we do get it really strongly," she said.

Fallon has lived in the city's eastern suburbs for 23 years and said she had always thought it was the city's oxidation ponds - but now she's not so sure.

"It's always been bad but probably but more so since the earthquakes and it has made me wonder over time whether it is actually the Bromley ponds or whether there is another cause for it," she said.

ECan started a specific programme to look at odours about 12 months ago in efforts to solve the mystery.

Its senior manager for service delivery Nick Daniels said there had been more than 300 odour related complaints within those 12 months.

"They're quite literally a number of causes out there ... food processing industries, composting industry, there's also a wastewater treatment plant and transfer station," Daniels said.

"So there are a number of potentially odour and emitting sources out in Bromley that we need to try and get on top of."

Daniels said work done with Canterbury District Health Board had shown there was no health risk associated with the odours, and he hoped smart phone apps could be used as a tool to help find the culprits.

Business can also be penalised for releasing unpleasant odours.

ECan will host feedback sessions on the apps next month and report back to the local community board in mid to late March.