Health experts are concerned thousands of Cantabrians living with asthma or allergies such as hay fever may face stigma due to their symptoms being inadvertently confused with those of Covid-19.

It comes on the back of a new study which has found 33 per cent of Cantabrians would automatically assume someone coughing or sneezing near them may have Covid-19.

According to the study, the number of people who say they are living with asthma in Canterbury is higher than the national average - 16 per cent compared to 13 per cent.

Massey University epidemiologist and Professor of Public Health, Jeroen Douwes, says the results of the research are concerning and may lead to discrimination in the workplace or school.

Asthma is a non-contagious, respiratory disease that affects the airways in the lungs, and from time to time may restrict breathing. Symptoms can include coughing, wheezing and shortness of breath. People with hay fever may also experience sneezing and coughing as a trigger response to exposure to an allergen.

Similarly, symptoms of Covid-19 include a dry cough, sneezing and difficulty breathing or shortness of breath.

According to latest Government data, one in eight Kiwis take medication for asthma and more than one person dies every week as a result of the disease. Asthma mortality rates are more than three times higher for those of Maori and Pasifika ethnicities. 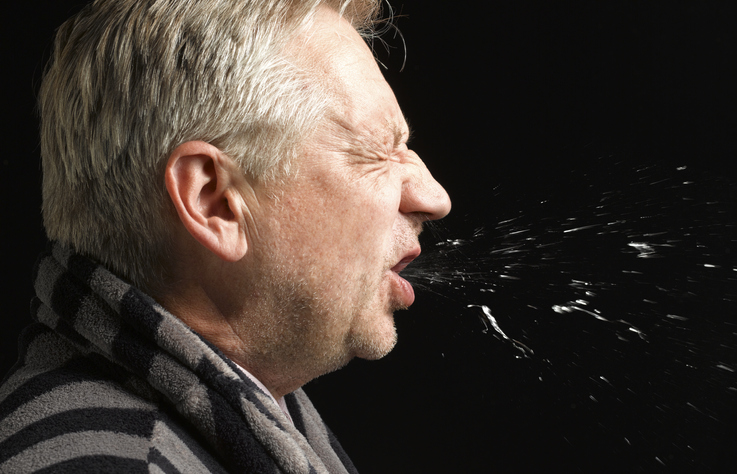 Photo: Getty Images
The new Sensitive Choice study also found four in 10 (40 per cent) New Zealanders would automatically assume someone coughing or sneezing near them may have Covid-19. The research found a sixth (15 per cent) of the 1000 survey respondents are living with asthma and 42 per cent of this population were worried about the complications from exposure to Covid-19 as a result of their pre-existing condition.

Douwes said there is not enough research available yet to fully understand the relationship between asthma and Covid-19 or whether the complications from the disease may be more significant, but many Kiwis living with asthma will have elevated stress levels as a result of the uncertainty.

"Asthma, in particular, is a potentially deadly disease which tragically takes the lives of dozens of Kiwis every year - despite usually being manageable with treatment.

"Any scenario where a person with asthma may experience stigma or discrimination as a result of experiencing common symptoms of the disease puts them at unnecessary risk.

“In the current pandemic environment, this could occur in the workplace or at school where the standard practice for those who are coughing or sneezing is to send them home.

“If we are confusing asthma or allergy symptoms with potential symptoms of Covid then this would be a highly undesirable effect of what is otherwise a very good public health prevention method.

“We know that asthma exacerbations can be brought on by stress so it is important that we project a level of empathy towards those living with an already challenging disease as well as those simply experiencing hay fever symptoms which are set to peak this summer.

The study also found more than half of New Zealanders live with some form of allergy. An intolerance to pollen is the most common affecting more than a quarter (27 per cent) of the adult population. Dust and dust mites are the next most common allergen a sixth (16 per cent) of Kiwis while the incidence of food allergies is present in 13 per cent of respondents.

Allergies to medicines, insect stings, mould, animal hair were noted by between 10-7 per cent of adults while an allergic reaction to latex made up a further 2 per cent.

Among those Kiwis living with asthma or allergies, many had experienced a range of emotions which in some cases have been heightened by the current pandemic. A third (31 per cent) say the health conditions make them feel annoyed while a fifth (21 per cent) say they become more anxious or stressed as a result.

When it comes to addressing the burden of the disease, four out of five New Zealanders (81 per cent) believe that more research needs to be undertaken to better understand ways to help New Zealanders living with asthma or allergies.

Nearly half (49 per cent) of Kiwis think that the health care industry should undertake more research in this field, while 38 per cent say academic institutions should lead the way and 31 per cent believe it is the responsibility of Government to fund the research.

“There are three key areas we need to better understand, the most fundamental of these is focusing research on getting the treatment for asthma to those people that actually need it.

“There are still children, predominantly Maori and Pasifika children, in this country that end up in hospital multiple times a year and are not being prescribed the standard treatment.

“Another issue we are facing is one of compliance - learning how to help those who have been prescribed medicines for the treatment of asthma and use them according to their GP’s direction.

“We also need more information about asthma phenotypes. We now know that asthma is not a single disease and there are some types of asthma that do not respond well to conventional treatments, and yet we are still treating those presenting with asthma symptoms in much the same way,” he says.

Adele Taylor, of the National Asthma Council’s Sensitive Choice Programme, a not-for-profit organisation established to help raise awareness of asthma and allergy management, says it is important to understand the day-to-day challenges faced by thousands of New Zealanders.

“There are many common environmental triggers which may cause a range of symptoms for those Kiwis living with asthma and allergies.

“While we are all facing a common threat from Covid, it is essential that we don't lose sight of the need to support those who face challenges from pre-existing conditions, and avoid creating additional barriers to better health outcomes,” she says.