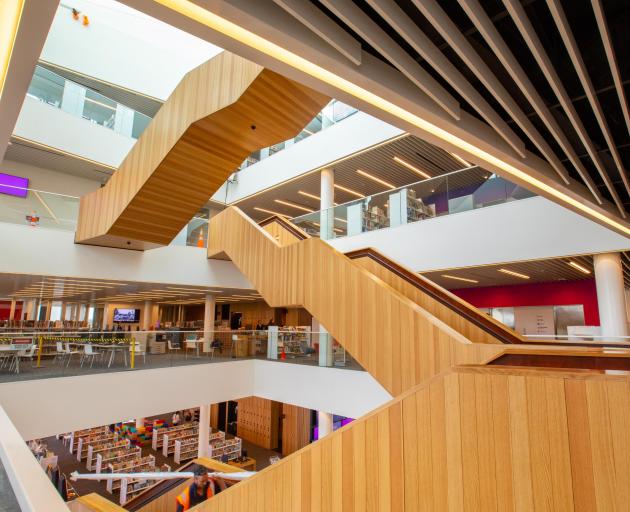 Tūranga. Photo: Newsline
Library fines for overdue books would be abolished under a recommendation to be considered by the Christchurch City Council next week.

An increasing number of libraries across New Zealand and overseas are scrapping fines, including Auckland, Dunedin, San Francisco and New York.

They found return rates increased when fine-free policies were introduced.

Fines for overdue items are currently charged at 70 cents per day, up to a maximum of $21 per item at Christchurch public libraries.

Memberships are blocked once people have $30 or more in unpaid fines and charges, or owe fines for more than 21 days.

Once this happens, they cannot borrow items, put them on hold or access eResources.

Council staff have recommended getting rid of library fines and writing off all debt from March, at an estimated cost to ratepayers of $300,000 in lost revenue every year, although the move would come with $40,000 in administrative savings.

A report noted libraries regularly received feedback about fines from people under financial pressure, those who believe rates covered all charges, and borrowers astonished by how much they had been ordered to pay.

"Her two daughters who were 10 and 11 years old were only able to get out two books each. They'd gone to choose books, and got a big pile, but they weren't able to do that just in case the mum got out adult books on the kids' cards," she said.

People's credit ratings could be also affected if they were referred to debt collectors, she said,

"At a time when everyone's going into a lot of detail with people's credit when it comes to mortgages and those kind of things, a small library fine, I have heard, has had an impact on people's ability to do that kind of thing," she said.

The report said the removal of fines would improve equity of access for people who could least afford it.

"Originally fines were intended to motivate customers to return items to improve access to the collection for other customers. Instead fines have become a barrier, particularly for those customers who cannot afford to pay," the report said.

Templeton said people tended to return books sooner if they did not attract late fees.

"That sounds counter-intuitive, but actually, once people know a book is late there's a bit of a shame factor," she said.

"If you lose a book or just don't return a book there will still be a replacement cost for that book that will be charged to people, so there's no incentive just to hold onto books forever."

Children and teenagers up to the age of 18 and borrowers with concession membership are exempt from paying fines at Christchurch city libraries.

The proposal will be considered by the council at a meeting next Thursday.