0 Comments
June is international Pride month, but organisations in New Zealand are continuing the fight to address the darker side of life faced by the rainbow community.

In Christchurch, buildings have been lit up, rainbow flags are flying, drag queens are telling stories and Cashel St has been given a colourful makeover - all in the name of Christchurch PRIDE which kicked off with a rainbow parade down Cashel St on Friday.

Christchurch City Council is supporting the annual event that celebrates the diverse groups of the city’s LGBTQIA+ community runs from today to Tuesday.

Businesses are also being encouraged to decorate their office, shop, restaurant or bar as a sign of support.

"Greater Ōtautahi Christchurch is a place that celebrates and embraces our diversity, and we are excited that PRIDE is the first festival back in our calendar.  We are also inviting members of the rainbow community from around the country to come and join in the celebrations," Mayor Lianne Dalziel says. 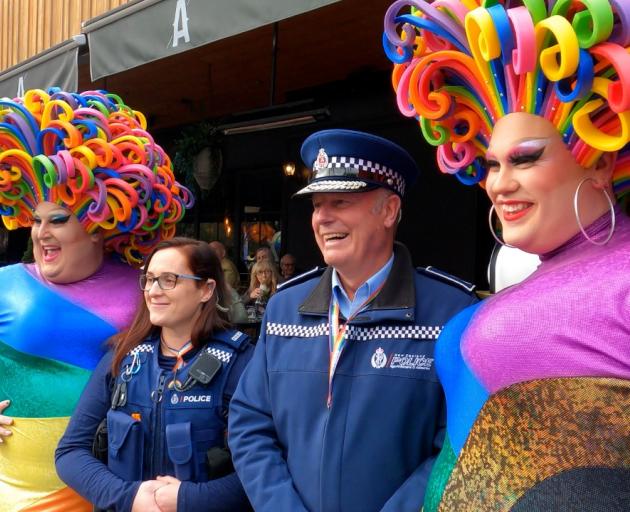 Photo: Geoff Sloan
Christchurch City Libraries will be hosting a number of events throughout June, including Queens Telling Stories at Tūranga, a Pride Clothing Swap at Fendalton Library, Pride Youth Creative Time at Tūranga and a Rainbow Book Club Party also at Tūranga.

Meanwhile, research shows rainbow communities are more likely to experience homelessness than other groups, and a collaborative project is making a first attempt to minimise this.

Making Space is bringing together sector leaders and those with lived experience to help housing services better cater to rainbow-identifying people, with the intention to spread wider.

Nyx Simons has worked to battle homelessness in LGBTQI+ and takatāpui communities for 10 years, but leading the Making Space project has reminded them how severe the issue is.

"It's been quite difficult doing this project, 'cause you know I come from lived experience, I'm a rainbow person myself, it's been really hard to hear the horrible stories of things that are happening."

The themes recently established in their insight report are sobering: it was found that the rainbow community consistently faces discrimination and violence within housing and homelessness services, and only reach out for support as a last resort.

"We've got young people who are living in motels, in emergency housing, that are being abused, subject to violence and discrimination, scared to leave their rooms, and don't have anywhere else to go."

Tamara Anderson works alongside many of these people as a social work practice manager, and says the most common path to homelessness is rejection of their identities from families.

"Some families, they won't accept their child being LGBTQI."

But while family homes can become unsafe, it seems the odds are stacked against LGBTQI+ people in the rental market too.

"They're sort of judged on their outside appearance, and also their sexuality," she said.

"The business model seems to view us as a risk."

Brodie Fraser, an Otago University researcher of homelessness in the rainbow community, says mistreatment from from institutions across the board causes distrust of housing services.

"Rainbow communities often have quite a low level of trust in institutions that are mean to support us, so for example if you go to a doctor and have a really really bad time, you might be a little bit distrustful of other institutions."

While New Zealand doesn't have national statistics on LGBTQI+ homelessness, Fraser's research confirms the group is at higher risk because of prejudice and systemic injustice.

Nyx said the scale of the homelessness problem for the community can at times be overwhelming, but was determined to think ahead.

"Rainbow issues have been around for a really long time and I feel like we've kind of arrived in a space where we don't have to fight for that voice to be heard. But we do need to be starting to look towards, what are the solutions."