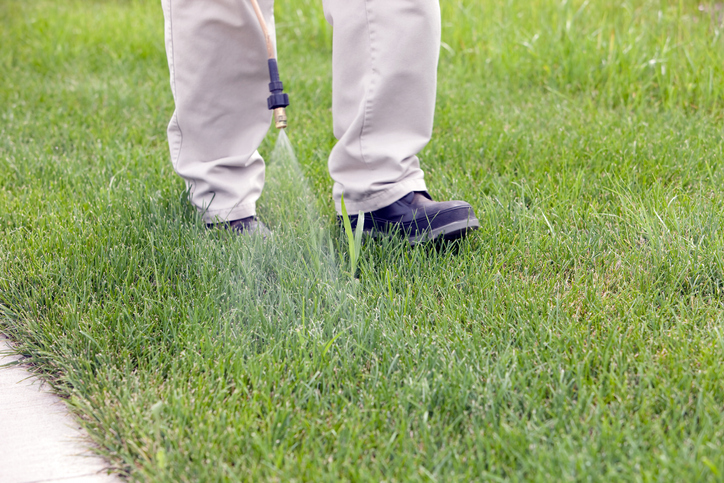 Photo: Getty Images / Supplied
When Ngahuia Freed’s six-year-old son stepped into a puddle containing toxic weedkiller outside their Christchurch home, she knew she had to take action.

The Waltham mother is now rallying her neighbours to draft a letter to Christchurch City Council for her street to become glyphosate-free, and wants to opt out of its street spraying programme.

Glyphosate, found in weed killers such as Roundup, has only been used in places across the city that were closed to the public, or where no other methods were viable since 2016.

However, the chemical is still being used on residential streets.

Said Freed: "We walked outside onto the footpath with my six-year-old, who didn’t have any shoes on, and at the bottom of our steps, he walked across a wet patch that had just been sprayed.

"A City Care worker was just up the road, masked, and spraying weeds on the footpath and berm and he said it was glyphosate.

Her concerns followed a reversal on a proposal earlier this year to increase its use to save the city council more than $3 million after Covid-19 left a $90 million financial gap.

But the plan was weeded out after public backlash due to the herbicide’s classification as being “probably carcinogenic to humans” by the International Agency for Research on Cancer.

When Freed contacted the city council to ask why she was not made aware of the spraying, it acknowledged the chemical was toxic but said there were no policies in place to notify residents.

She was told by staff that spraying took place three times a year and alternative methods were being trialled to get glyphosate off streets, such as hand-weeding and steam.

“This really isn’t good. If you feel strongly about this, then I encourage you all to get together and opt out,” said Freed.

City council transport operations manager Steffan Thomas said residents can request to be added to a no-spray area outside their property but public notification was not possible.

Although alternative methods came at a higher cost to the city council, they have been adopted where possible in spite of the challenges.

“We are trying to strike the right balance,” he said.

“The non-chemical methodology can take longer to apply and requires more visits, which increases the risk for contractors due to their greater exposure to live traffic.

“Producing signage or sending letters to residents in the area would come at an additional cost to the ratepayer and is not something staff have actively pursued to date.”