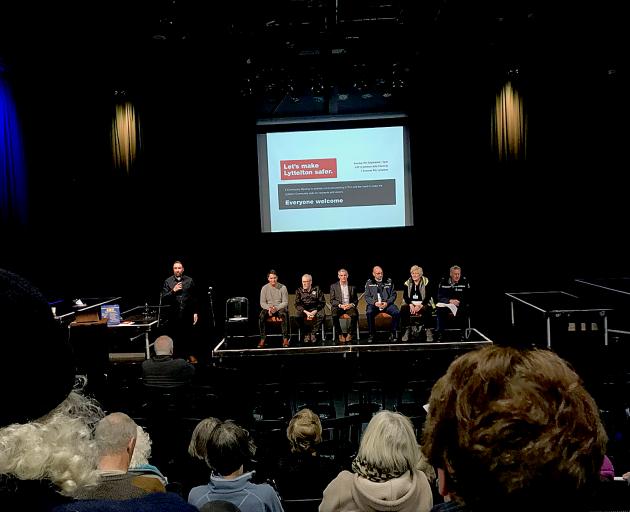 The vehicles were stolen on Brittan Tce and St Davids St.

Senior Sergeant Roy Appley told Bay Harbour News on Tuesday two car thefts in a small community on the same night indicates there is a problem with crime.

About 80 people attended the meeting to discuss how police are responding to crime in Lyttelton and what can be done to make the area safer.

The meeting was attended by residents, the police, the City to Sumner Community Patrol, Neighbourhood Support and Banks Peninsula Community Board members.

Senior Sergeant Appley was at the meeting and said residents were mainly concerned about crimes like property theft and damage.

In response to residents’ concerns, he said police will work on having a “high profile”.

“We intend on working with the community to prevent as many crimes as possible.”

Police will also meet more regularly with the community board, help explore the option of security cameras and look at how police and the community can work better together.

The Lyttelton Police Station is only staffed between 8am and 5pm – after that calls are taken at the Christchurch Central Police Station.

Private security company Tactical Response Team has been patrolling the streets at night to bridge the gap in police presence.

Its operations director Shannon Mudge said TRT is now discussing the possibility of becoming affiliated with the community patrol, as it has a good working relationship with police.

City to Sumner Community Patrol chairman Allan Bain said if the patrol is able to get more volunteers, a car could be placed in Lyttelton full-time.

“We are quite willing to start a group over there, but we’ve got to get the numbers. If people are willing to, we can get them signed up,” he said.

Lyttelton resident Vicki Tahau-Paton was satisfied with the outcomes reached at the meeting.

“It’s a bit soon to tell and I don’t want to get too excited but I have faith (police) will come to the party with it,” she said.

But she said it will not just be up to the police to make the difference.

Ms Tahau-Paton said there was an emphasis at the meeting on residents helping to reduce crimes, such as closing garage doors.

“It’s up to everyone in Lyttelton to partake in it, it’s not just one-sided.”

Deputy mayor and city councillor Andrew Turner said there is an “understanding on the part of the police that some work needs to be done to restore the confidence of the community.

“Equally, there are some things the community can do to work better with the police in terms of reporting crime and protecting property.”

•The City to Sumner Community Patrol is seeking volunteers to help out in Lyttelton. If you are interested, phone Allan Bain on 021 361 434.