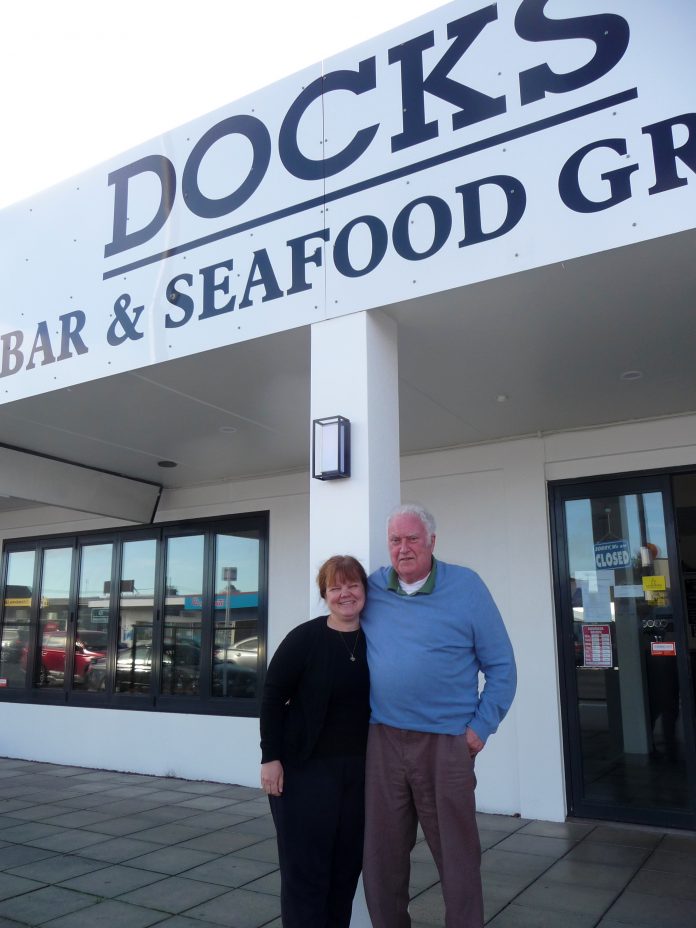 Anna and John McDonald at Docks.
There are battered oysters, mussels and up to 10 species of fresh fish on the menu at new Allenton restaurant Docks Bar & Seafood Grill.

Docks owner John McDonald is passionate about his fish and gets regular tip offs as to what’s available at the Christchurch fish auction. He travels north a few times a week to get the fresh catch.

While blue cod remained a big customer favourite, there was a broad range of fish to tempt diners, said Mr McDonald.

The fish catch was seasonal and needed to be absolutely fresh, prepared and right cooked right.

Mr McDonald has fishing in his blood.

His father was a fisherman from Scotland and jumped ship when in the navy and arrived in New Zealand after the war.

“My family had day boats and trawlers, but sold the last of those interests in 1992,” Mr McDonald said.

He had done some fish dealing here as a young man, before heading overseas to work in the capital markets, a career he followed for 30 years.

He and his wife Anna, a Russian-born lawyer, shifted back to New Zealand permanently in 2018 to start a new chapter in their lives.

Having returned to his piscatorial roots, Mr McDonald sources the fish and runs the kitchen at Docks, while his wife overseas the restaurant side.

“I was always going to be coming back to Ashburton to live.

“We used to have a house here and it’s a great town and located well for Christchurch airport.”

There were few fish restaurants around the country, and he believed there was enough demand in Ashburton for his.

Docks, located at the Allenton Shopping Centre, is open six days and only closed on Mondays. It offers a special lunch for Gold Card holders from Friday to Sunday (noon until 2pm).