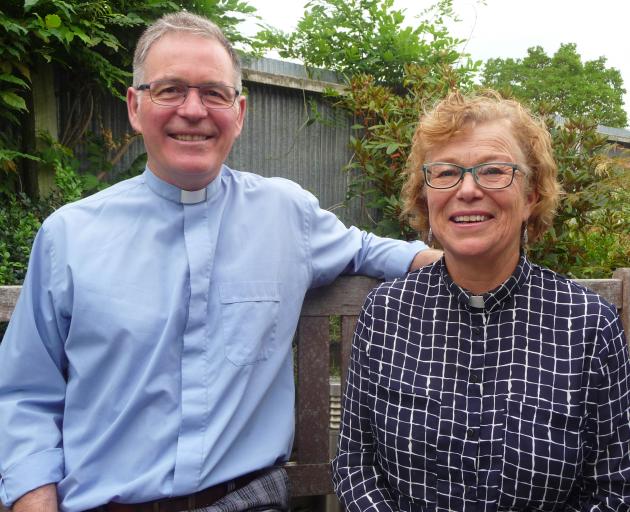 Michael, who ran his own dental practice in Ashburton for many years until he sold it last year, was ordained as a local priest at St Stephen’s 19 years ago.

Mary-Jo was ordained as a deacon at a ceremony in November, and after the couple had completed 18 months of studies at the St John's Theological College in Auckland.

Both have already run church services in Methven and Rakaia and will move into the vicarage at Methven in a few weeks time with their dog .

The Rakaia parish also takes in churches at Barrhill and Dorie and the Holdaway are replacing previous interim ministers.

Michael said the idea of taking more formal theological studies had been suggested to him.

‘‘I was feeling a ‘bit stuck’ and and Mary-Jo and I talked it through. It was something we decided we really wanted to do, and instead of thinking ‘what if’, we went for it.’’

Michael said he would continue to work part-time as a dentist, but was excited by the new direction and the co-responsibilities.

The Holdaways worked together for a short period in the dental practice and will run joint and solo services.

Mary-Jo said there would be challenges ahead and there was a huge learning curve.

She said the couple had been warmly welcomed by their new congregations and were looking forward to the move to Methven.

Michael said his role as an ordained priest was to ‘‘make room’’ for those already in the church and also to welcome strangers coming in.

His work was about promoting good news and good messages, supporting the community and gathering people together.

A favourite saying of Mary-Jo is that ‘‘you can have comfort and courage, but you can’t have both.’’

The couple are stepping outside of their comfort zone, but are excited about the change of direction and the challenges they will tackle together.