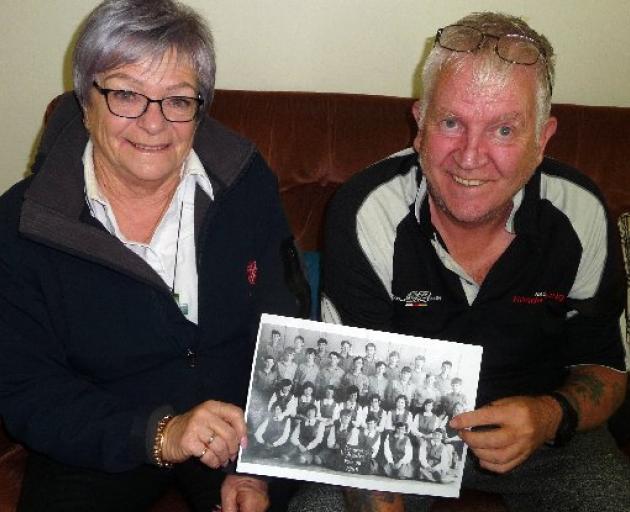 Methven High School class of 1969 students Judith Lilley and Kit Kennedy with a copy of the old class photo
It’s been a long time between lessons for the form 3B students who started at Methven High School in 1969, but those memories will soon be rekindled at an overdue class reunion.

It is the first reunion for the former classmates, who started their secondary school education 50 years ago.

The get-together is being organised by Judith Lilley (nee Marshall), Judy Skevington (nee Stewart), Dick Masters and Kit Kennedy and some 70 per cent of form 3B are expected to attend.

Mr Kennedy said he remembered 1969 because as well as starting a new school, it had been the year of the moon landing and some great music was playing on the airwaves.

He said the Methven High School roll had been around 500, similar to today’s roll at Mt Hutt College.

The school layout had also not changed too much over five decades.

His class of school starters were 14 and 15 year olds and were regarded as more practical students, compared with form 3A, who were the “academic” types.

“Our form teacher was Bill Liddell and the headmaster was Cuth Reid – they were both good guys.

“In fact, I remember a lot of good people, both students and teachers, and good times.”

Mr Kennedy said he had attended the school for three and half years before heading into the workforce.

Some of the parents of pupils in her class were close and students enjoyed some good socials at the picture theatre.

“There were no memorable school romances to talk about,” she said.

Mrs Lilley said she had kept in touch with a few classmates.

Two had died over the years and a couple more had not yet been tracked down for the reunion, although she hoped they might still come forward.

The Methven High School class reunion starts with an informal gathering at the Blue Pub on September 27, when former 3B students will be joined by some of their counterparts from form 3A.

The following evening the same venue will host a dinner for just former 3B students and their partners.

Anyone wanting to know more about the reunion can contact Kit Kennedy on 220 848 320.