Anger in Spain as five acquitted of rape of teen 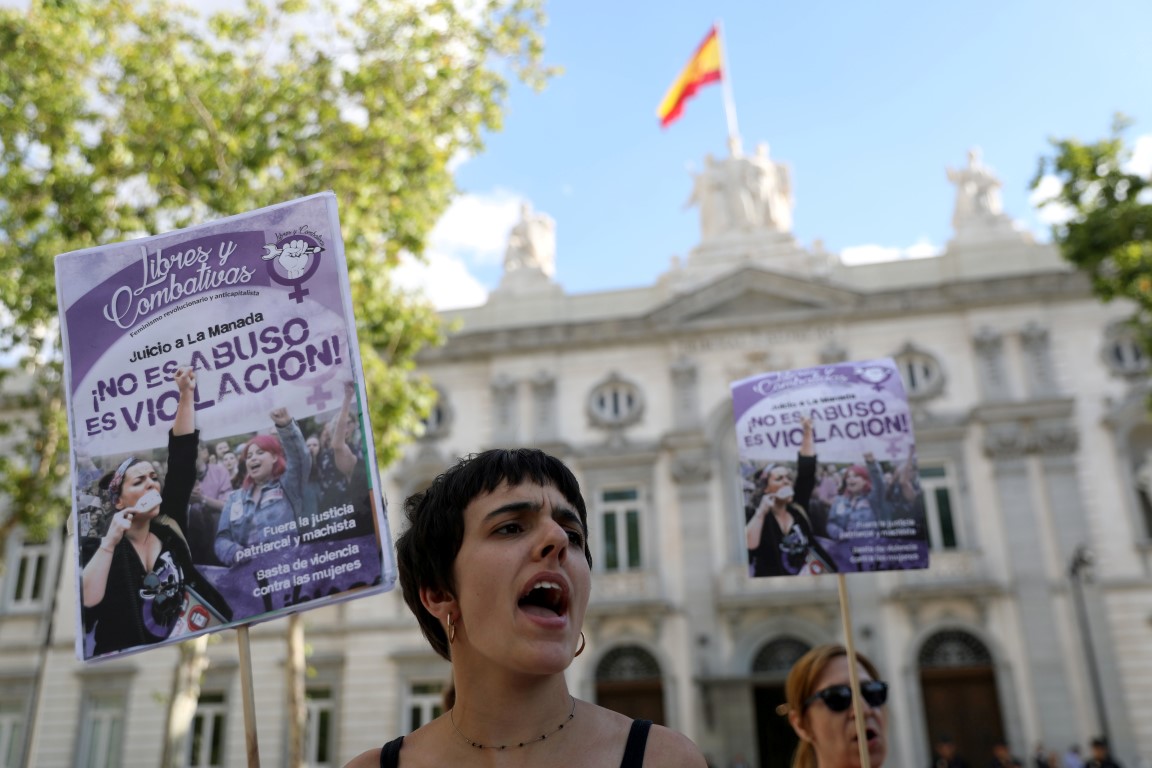 Women gather outside the Supreme Court in Madrid after Spain's top court found five men known as the "Wolf Pack" guilty of rape in June. The banner reads: It's not abuse, it's rape. Photo: Reuters
Women's rights campaigners in Spain have called for a change in the law after a court in Barcelona cleared five men of raping a 14-year-old girl and jailed them for the lesser charge of sexual abuse, ruling that they did not use violence.

The men, who denied the charges, took turns to have sex with the teenager after a party in Manresa, a town to the north of Barcelona, in October 2016, the court heard.

On Thursday they were sentenced to between 10 and 12 years in jail for sexual abuse, avoiding more serious charges of rape or sexual assault because the court said the girl was drunk and unconscious, did not fight back and the men were not violent.

Ada Colau, the mayor of Barcelona, took to social media to express her anger at the verdict, saying it was "outrageous" and the result of a patriarchal judicial system.

"I'm not a judge and I don't know how many years in prison they deserve, but what I do know is that this is not abuse, it is rape!" she wrote on Twitter.

The verdict has reignited a debate over the Spanish judiciary's treatment of women, which intensified with the 2016 "Wolf Pack" case, in which an 18-year-old woman was gang-raped during the running of the bulls festival in Pamplona.

The men, who included a former policeman and a former soldier, had shared videos of the incident in a WhatsApp group and joked about it afterwards.

In June, Spain's Supreme Court ruled the five accused were guilty of rape not the lesser crime of sexual abuse, increasing their sentence to 15 years rather than the nine years they had been given for sexual abuse by a regional court.

Outrage and protests over the initial verdict prompted a government promise to change the law, but critics say the Manresa case shows how the penal code is still outdated.

"It makes no sense that the law continues to distinguish between abuse and sexual assault," Nuria Gonzalez, a Barcelona-based human rights lawyer, told the Thomson Reuters Foundation.

"Everything that happens after a woman says no, or says nothing at all, or which happens through violence and intimidation, goes against the will of the victim and is a sexual assault in which there is no room for mitigating or lower grades," she added.

Spanish law requires that the plaintiff in a rape case must present evidence of intimidation or specific violence.

"Any attack on sexual liberty should be considered violence," Graciela Atencio, a women's rights activist and director of the website Feminicidio.net, told the Thomson Reuters Foundation.

"It's important that they introduce the term rape into the penal code for all attacks that involve penetration and that any sexual behaviour without consent be considered sexual violence."