Officials said they expected the death toll to rise further after Tuesday's (local time) blast as emergency workers dug through rubble to rescue people and remove the dead. It was the most powerful explosion in years in Beirut, which is already reeling from an economic crisis and a surge in coronavirus infections.

President Michel Aoun said 2750 tonnes of ammonium nitrate, used in fertilisers and bombs, had been stored for six years at the port without safety measures, and said it was "unacceptable".

He called for an emergency cabinet meeting on Wednesday and said a two-week state of emergency should be declared. 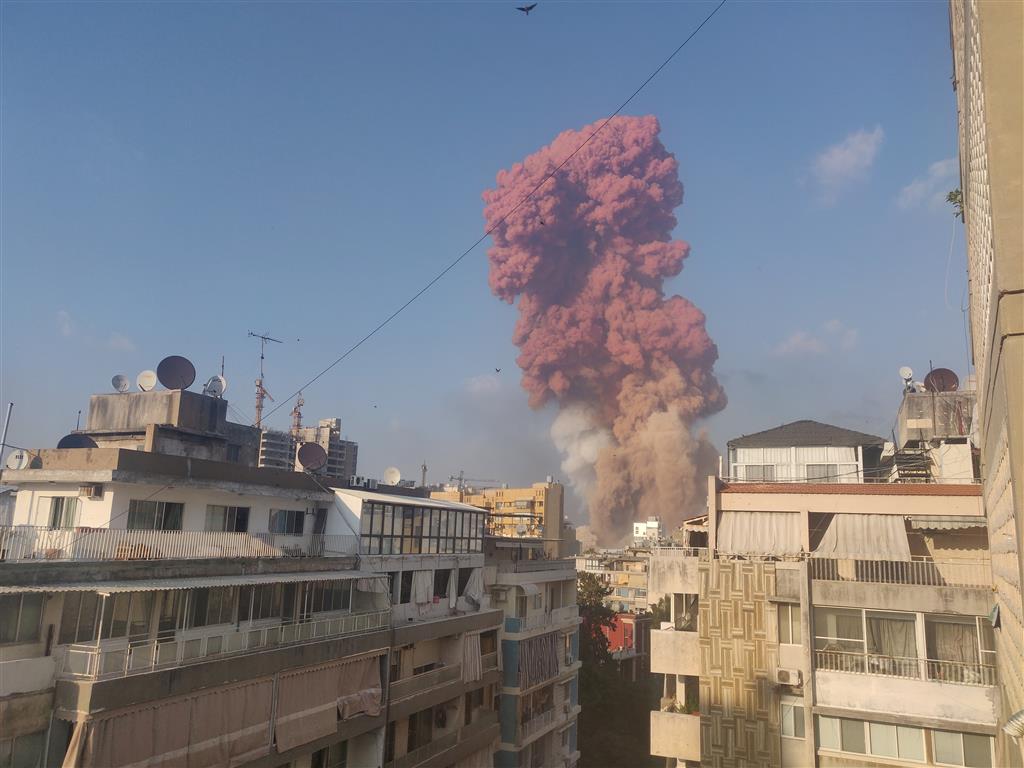 Smoke rises following the explosion in Beirut, in this picture obtained from a social media video. Talal Traboulsi/via REUTERS

"What we are witnessing is a huge catastrophe," the head of Lebanon's Red Cross George Kettani told broadcaster Mayadeen. "There are victims and casualties everywhere."

Hours after the blast, which struck shortly after 6pm (local time), a fire still blazed in the port district, casting an orange glow across the night sky as helicopters hovered and ambulance sirens sounded across the capital.

A security source said victims were taken for treatment outside the city because Beirut hospitals were overwhelmed with wounded. Ambulances from the north and south of the country and the Bekaa valley to the east were called in to help.

The huge blast revived memories of the 1975-90 civil war and its aftermath, when Lebanese endured heavy shelling, car bombings and Israeli air raids. Some residents thought an earthquake had struck. Dazed, weeping and injured people walked through streets searching for relatives.

Others sought their missing loved ones in the overflowing hospitals. One medic said 200 to 300 people had been admitted to a single emergency department. 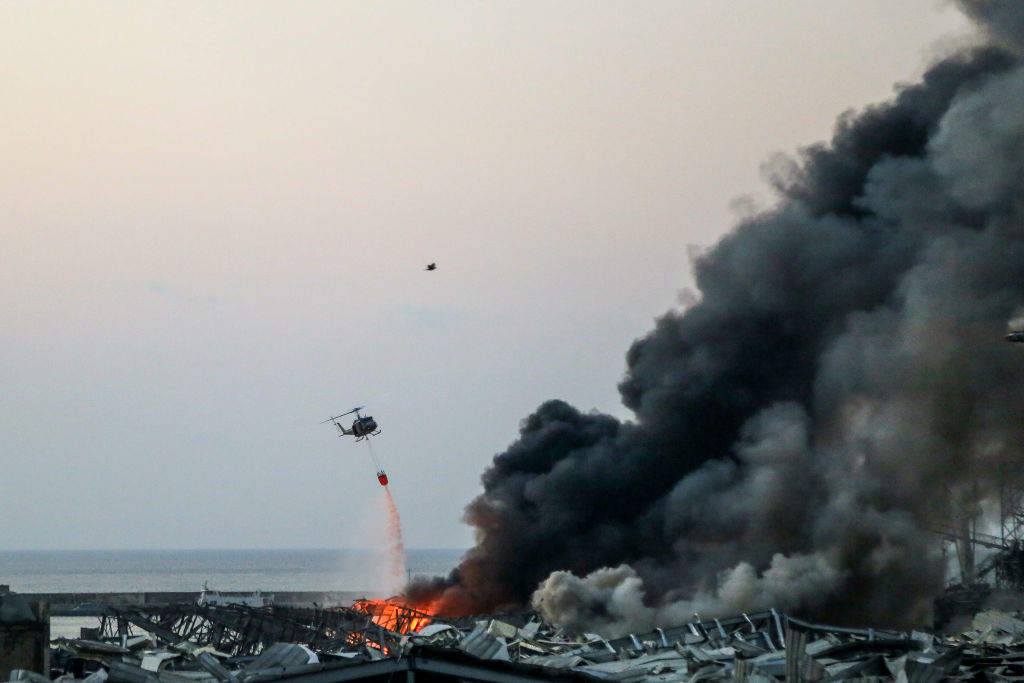 A military helicopter fights the fire following the explosion in Beirut's port. Photo: Getty Images
"I've never seen this. It was horrible," the medic, who gave her name as Rouba, told Reuters.

“The blast blew me off metres away. I was in a daze and was all covered in blood. It brought back the vision of another explosion I witnessed against the U.S. embassy in 1983," said Huda Baroudi, a Beirut designer.

Prime Minister Hassan Diab told the nation there would be accountability for the deadly blast at the "dangerous warehouse", adding "those responsible will pay the price."

The US embassy in Beirut warned residents in the city about reports of toxic gases released by the blast, urging people to stay indoors and wear masks if available.

Footage of the explosion shared by residents on social media showed a column of smoke rising from the port, followed by an enormous blast, sending up a white cloud and a fireball into the sky. Those filming the incident from high buildings 2km from the port were thrown backwards by the shock.

Bleeding people were seen running and shouting for help in clouds of smoke and dust. Streets looked as if they had been hit by an earthquake, with damaged buildings, flying debris, and wrecked cars and furniture.

Officials did not say what caused the blaze that set off the blast. A security source and local media said it was started by welding work being carried out on a hole in the warehouse. 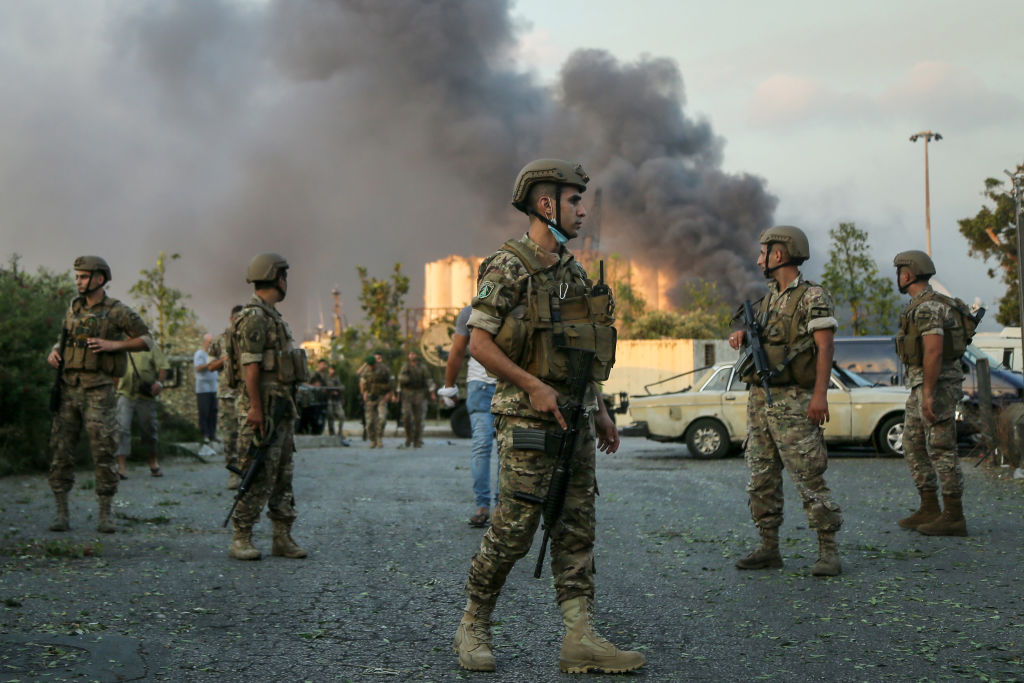 Lebanese soldiers stand guard near the site of the explosion in Beirut's port. Photo: Getty Images
The government said it was still struggling to establish the magnitude of the disaster. "There are many people missing. People are asking the emergency department about their loved ones and it is difficult to search at night because there is no electricity," Health Minister Hamad Hasan told Reuters.

Lebanese broadcaster al-Jadeed read out appeals for information about the missing into the early hours of the morning. Some people posted photos of missing relatives on social media.

The prime minister called for a day of mourning on Wednesday.

The explosion occurred three days before a UN-backed court is due to deliver a verdict in the trial of four suspects from the Shi'ite Muslim group Hezbollah over a 2005 bombing which killed former Prime Minister Rafik al-Hariri and 21 others.

Hariri was killed by a huge truck bomb on the same waterfront, about 2km from the port.

Israeli officials said Israel, which has fought several wars with Lebanon, had nothing to do with Tuesday's blast and said their country was ready to give humanitarian and medical assistance. Shi'ite Iran, the main backer of Hezbollah, also offered support, as did Tehran's regional rival Saudi Arabia, a leading Sunni power. Qatar and Iraq said they were sending makeshift hospitals to assist the high numbers of casualties.

The United States, Britain, France and Germany expressed shock and sympathy and said they were read to help.

US President Donald Trump indicated at a White House briefing that the explosion was a possible attack. Asked later to elaborate, Trump said that he had met some US generals who felt it was not "some kind of a manufacturing explosion type of event."

Two US officials, speaking on the condition of anonymity, said initial information contradicted Trump's view, however.

The blast threatens a new humanitarian crisis in a nation that hosts hundreds of thousands of Syrian refugees and which is already grappling with economic meltdown under one of the world's biggest debt burdens.

Images showed port buildings reduced to tangled masonry, devastating the main entry point to a country that relies on food imports to feed its population of more than 6 million.

Residents said glass was broken in neighbourhoods on Beirut's Mediterranean coast and inland suburbs several km (miles) away. In Cyprus, a Mediterranean island 180km across the sea from Beirut, residents heard the blast. One resident in Nicosia said his house and window shutters shook.