With moderator Chris Wallace trying in vain at times to control Tuesday's debate, the two White House contenders talked over each other and lobbed insults in a political brawl that made it hard for either man to make a point.

"Will you shut up, man? This is so unpresidential," said an exasperated Biden (77)  after repeated interruptions during only the first segment of the debate on the Supreme Court.

Biden called Trump a "clown" and a "racist" and told him: "You're the worst president America has ever had."

Trump for his part said: "There's nothing smart about you, Joe." 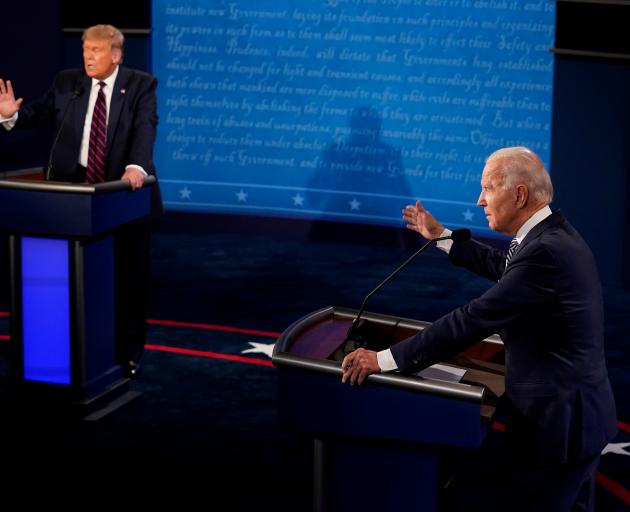 President Donald Trump (left) and Democratic presidential nominee Joe Biden take part in the first debate in Cleveland. Photo: Reuters
Biden questioned Trump's leadership on the coronavirus pandemic, saying the 74-year-old had panicked and failed to protect Americans because he was more concerned about the economy.

"He panicked or he looked at the stock market," Biden said of Trump, who has pushed for states to reopen their economies and played down the threat of the pandemic.

"A lot of people died and a lot more are going to die unless he gets a lot smarter, a lot quicker," Biden said.

He defended his approach on the pandemic, which has killed more than 200,000 people in the United States and put millions of Americans out of work.

"We've done a great job," Trump said. "But I tell you, Joe, you could never have done the job we've done. You don't have it in your blood."

With more than a million Americans already casting early ballots and time running out to change minds or influence the small sliver of undecided voters, the stakes were enormous as the two White House candidates took the stage five weeks before the November 3 Election Day.

The two contenders did not shake hands as they entered the debate, adhering to protocols on social distancing because of the coronavirus.

Biden has held a consistent lead over Trump in national opinion polls, although surveys in the battleground states that will decide the election show a closer contest.

The 90-minute debate, with a limited and socially distanced in-person audience because of the pandemic, was held at Case Western Reserve University in Cleveland. It was the first of three scheduled presidential debates and one vice presidential debate. 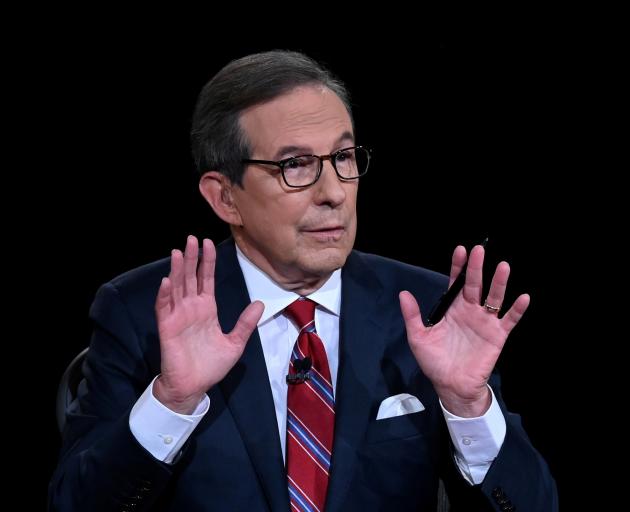 Trump deflected an opportunity to condemn white supremacists during the debate, briefly telling one group to "stand back and stand by" before pivoting to attacking left-wing activists.

During a segment on race relations, moderator Chris Wallace asked Trump if he was willing to denounce "white supremacists and militia groups" and tell them to stand down, rather than add to the violence that has marred anti-racism protests in some US cities.

Multiple senior federal officials, including at the FBI and Department of Homeland Security this month have warned that white supremacist groups pose a rising threat of violence in the United States.

Trump on Tuesday initially replied by blaming "the left wing" for violence, before saying he was "willing to do anything."

"What do you want to call them? Give me a name," Trump said, prompting Biden to mention the Proud Boys, an organization that describes itself as a club of "Western chauvinists" but has been categorised as a hate group by the nonprofit Southern Poverty Law Center.

"Proud Boys, stand back and stand by," Trump said, before immediately pivoting. "But I'll tell you what, somebody's got to do something about antifa."

Antifa, which stands for anti-fascist, is a largely unstructured, far-left movement whose followers broadly aim to confront those they view as authoritarian or racist.

Biden has often said he decided to run for president after white supremacists attacked counter-protesters in Charlottesville, Virginia, in 2017 and Trump said there were "fine people on both sides."

While Trump has sought to distance himself from that comment, he has also been accused of downplaying the threat of white supremacists, even as his own administration has warned of the danger.

Trump defended his effort to swiftly fill a US Supreme Court seat, saying "elections have consequences" and he had the right despite Democratic objections.

"I will tell you very simply we won the election, elections have consequences. We have the Senate and we have the White House and we have a phenomenal nominee respected by all," Trump said in defence of his nominee, conservative Judge Amy Coney Barrett.

Biden, talking over frequent interruptions from Trump, said the seat of the late Ruth Bader Ginsburg should be filled after the November 3 election, when it was clear who the president would be.

"We should wait, we should wait and see what the outcome of this election is," Biden said, adding a more conservative Supreme Court would endanger the Affordable Care Act known as Obamacare.

Trump is moving quickly to fill Ginsburg’s seat in hopes of cementing a 6-3 conservative majority on the court, a key priority for social conservatives.

Democrats have argued Republicans are being hypocritical for moving quickly to fill the seat given they had blocked then-President Barack Obama's nomination to the Supreme Court in 2016, arguing it should wait until after that November election.

Trump repeatedly interrupted Biden as he attempted to answer questions, prompting Biden at one point to interject: "Will you shut up, man?"

The combustible Trump and more low-key Biden were debating an array of urgent political challenges, including the pandemic, protests for racial justice, as well as the battle over the Supreme Court.

Hours before the debate, Biden released his 2019 tax returns and his campaign called on Trump, who has come under fire for not releasing his returns, to do the same.

Biden took the step two days after the New York Times reported Trump paid just $US750 ($NZ1134)  in federal income taxes in 2016 and 2017 - and none in 10 of the previous 15 years - following years of reporting steep losses from business enterprises.

Biden's taxes showed that he and his wife Jill paid more than $US346,000 in federal taxes and other payments for 2019 on an income of nearly $US985,000 before seeking a refund of nearly $US47,000 they said they had overpaid the government.