Richie Mo'unga took time out from his training to get some cooking tips from Kiwi YouTube chef Jordan Watson aka How to Dad.

The Crusaders first-five is due to have his first child with his wife Sophie Vieceli in the coming months, and admits to being "a beginner in the kitchen".

Mo’unga is appearing in a new campaign for meal kit company, HelloFresh, alongside self-proclaimed parenting expert Watson as the two tackle dinner in a pop-up kitchen pitchside.

Mo'unga admits his involvement in the ‘How To Dinner’ campaign was somewhat out of his comfort zone.

"I’m a bit of a beginner in the kitchen and I pretty much rely on Sophie, but taking part in the series has inspired me to cook more, especially now with a baby on the way, and I’ve realised great tasting food doesn’t have to be complicated.

"I also found the recipe cards easy to follow and it’s given me a new confidence in the kitchen.

"Now I feel like I’m able to create a whole meal from start to finish on my own. I’m excited to have learned a new skill to relax with off the field,” he says. 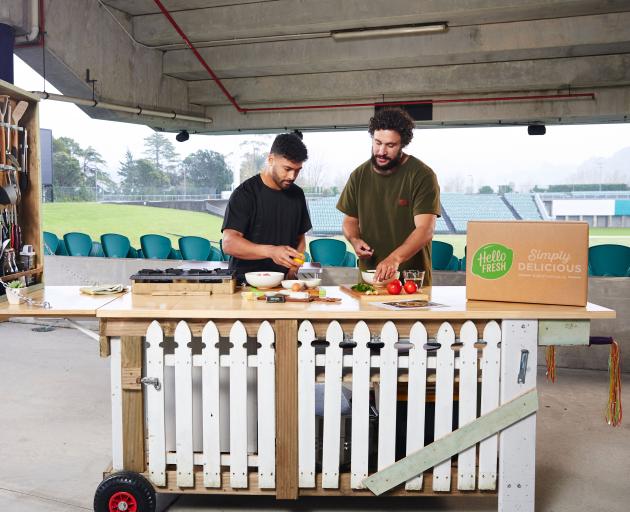 Photo: Supplied
In the tongue-in-cheek video, Mo’unga is seen cooking pitch-side as he and Watson serve up a popular recipe.

Mo'unga is the second high-profile Kiwi to feature on the How to Dinner video series with Suzanne Paul having joined Watson on screen during the lockdown.

Said Watson: “I’d say during our day that along with some kitchen skills Richie definitely came away with tips for on the field as well, I mean did you see him score that first try in last weekend’s game, I think he’s definitely taken some of my advice on board."