Prime Minister Jacinda Ardern has raised New Zealand to alert level three immediately and the country will move to level four in 48 hours.

Ardern said New Zealand faced the potential for devastating impacts, but there was a "small window to get ahead of it".

Schools are to be closed for all except children of essential service workers. Schools will close to all pupils after Wednesday.

"Now is the time to put our plans into action. We are fortunate to be in some way behind the majority of overseas countries in terms of cases ... but act now or risk the virus taking hold."

She said the situation was moving at pace "and so must we".

There have been 36 new coronavirus cases in the last 24 hours, bringing the total number in New Zealand to 102 confirmed cases. Two of those cases are now considered community transmission cases.

"If community transmission takes off in New Zealand, the number of cases will double every five days."

That would lead to health systems overwhelmed and the potential for tens of thousands of New Zealand deaths, she said.

"Our plan is simple. We can stop the spread by staying at home and reducing contact. Now is the time to act."

In 48 hours the alert level would be raised to level 4, she said. Essential services would still be open at all alert levels.

Ms Ardern is being joined by Finance Minister Grant Robertson and is also expected to outline the Government's next moves to help businesses and workers through the economic fallout of the Covid-19 outbreak.

She is also expected to say whether the alert level will be changed from the current level 2 setting. This morning the Teaching Council and former chief science advisor to the PM Sir Peter Gluckman added their voices to concerns about whether level 2 was too low.

There have been 36 new cases in the last 24 hours, bringing the total number in New Zealand to 102 confirmed cases. Two of those cases are now considered community transmission cases. 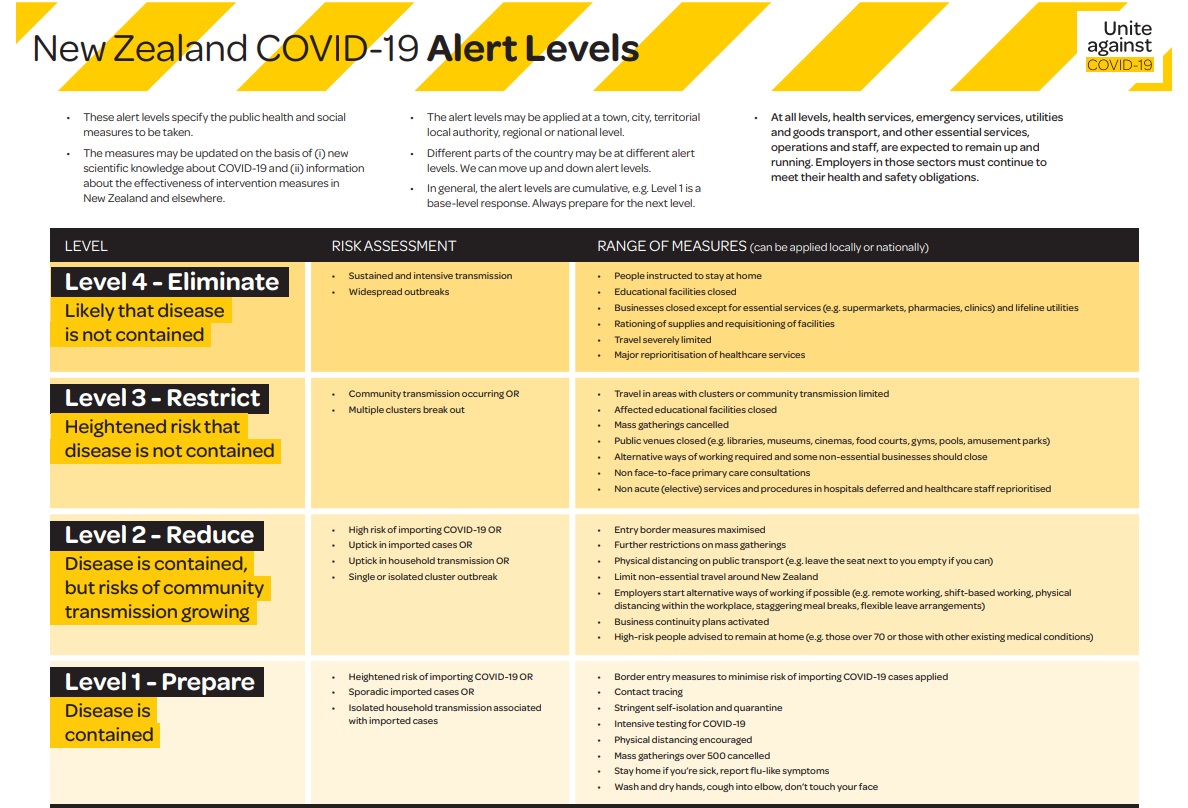 Director-General of Health Dr Ashley Bloomfield earlier said more than half of the new cases were directly related to overseas travel.

"So these are people who have returned to New Zealand recently and have become symptomatic, been tested and confirmed as cases of Covid-19.

"Most of the remaining cases are close contacts of a previously confirmed case or are associated with an event where there were confirmed cases already, for example, the Hereford Cattle conference in Queenstown."

There were still two cases - in the Wairarapa and Auckland - that could not be linked to overseas travel and were being treated as community transmission.

Contacting tracing efforts were being ramped up and the ministry was expecting more cases, Dr Bloomfield said.

"I would expect to see more cases each day."

There were 1100-1500 tests being done each day. About 1-2 percent of those were coming back positive - which was comparatively low compared to other countries, suggesting our rate of testing is reasonably high, he said.

"All indoor and outdoor events cannot proceed. In short, we are all now preparing as a nation to go into self-isolation in the same way we have seen other countries do. Staying at home is essential."

That would give the health system a chance to cope, she said.

While in alert level 4, Ardern said contact tracing would continue and testing would go on "at pace" to find out where cases are.

If we flush out cases we already have, and slow down transmission, areas could move out of level 4, she said.

Community transmission had a lag time, and these measures would be in place for at least four weeks, she said.

She repeated that pharmacy products will still be available, and supermarkets would stay open.

Ms Ardern is being joined by Finance Minister Grant Robertson and is also expected to outline the Government's next moves to help businesses and workers through the economic fallout of the Covid-19 outbreak.