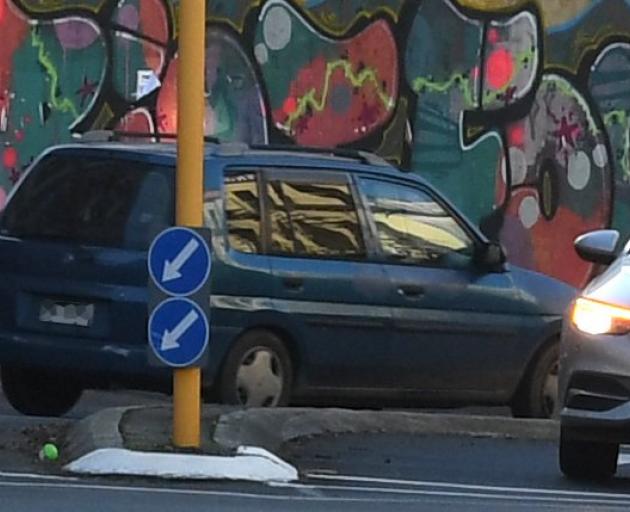 An allegedly stolen Mazda Demio is driven down lower Rattray St, in Dunedin, yesterday morning. PHOTO: STEPHEN JAQUIERY
A 12-year-old boy accused of stealing eight cars in a little over 24 hours needs to understand the chaos he leaves behind, one of his alleged victims said through tears yesterday.

Eight cars were stolen between Monday morning and Tuesday afternoon, before the offender was arrested in Mosgiel.

Senior Sergeant Anthony Bond, of Dunedin, said the boy sought by police was apprehended in Murray St about 1.30pm while attempting to get back into a stolen vehicle.

Seven Mazda Demios and a Honda Civic were stolen from Mornington, Fairfield, Port Chalmers, South Dunedin and the central city.

The case would be followed up by Youth Aid, Snr Sgt Bond said.

One of the boy’s alleged victims, Kensington resident Cindy Ashley, said she discovered her car was missing when she arrived home from work just before 5pm on Monday.

The only sign of it was some broken glass on the street where she had left it parked.

Police had informed her the person responsible was a juvenile offender who was known for similar acts.

A witness who recognised the boy driving her stolen car about 1pm reported it to police and informed Ms Ashley of the alleged offender’s age.

She described the theft as a "pretty devastating" violation.

Her hope was the offender would one day understand not just the chaos he was causing in people’s lives, but the financial impact of his crimes, too.

Through tears, she explained how she expected she would have to go into debt to pay for the damage, as insurance would not pay market value.

She wanted the offender to pay back everyone affected.

Fairfield resident Matt Stewart said a Mazda Demio was stolen from his daughter in mid-March by, he believed, the same boy.

It had been a 16th birthday present for her so she could learn how to drive, but it had cost several thousand dollars to fix the damage.

He felt angry and frustrated when he heard about the spate of thefts overnight, and was concerned the boy would offend again before too long.

He had no correspondence with the caregivers of the youth, but had received an invitation from a youth aid officer to a family group conference in mid-June, which he would attend.

That the boy was still allegedly stealing cars suggested the system seemed to be failing, he said.

Young people and their families were offered access to the therapeutic supports needed to address underlying factors that contributed to offending, he said.

The agency aimed to help youth find a stable home life, purpose and hope for a better future as an alternative to crime.

The impact of vehicle theft on victims and communities was acknowledged, but overall the rate of youth crime in New Zealand was falling and since January 2020 the number of offences referred to the agency for intervention has reduced by 21% nationally, he said.