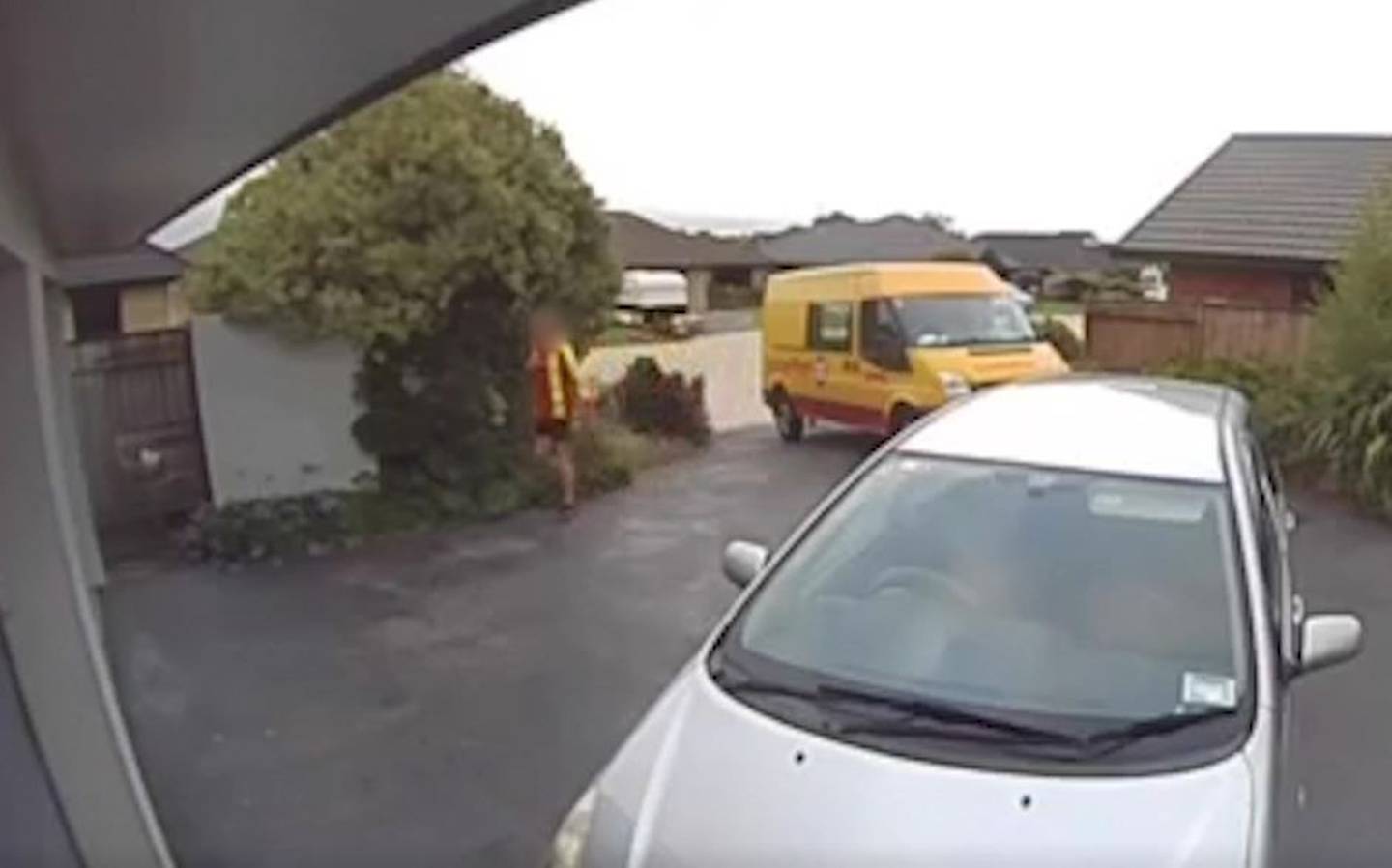 Video showed the driver making an extra delivery after he dropped off the package. Photo: Supplied
A Palmerston North woman says she is disgusted that a NZ Post courier driver used her property as a toilet, releasing video of the vile incident after receiving no response to her complaint.

Following Herald inquiries, the driver has now been taken off the road and NZ Post has apologised, saying what was seen on the video was "extremely disappointing".

The incident is the latest complaint from the public over the behaviour of NZ Post drivers, after video emerged of drivers throwing packages from their van.

Suzzanne Eavestaff shared video with the Herald showing the actions the driver took on the morning of January 9.

Video shows him pulling up in his van and dropping a package in the letterbox, but instead of returning to his van he continues walking up the driveway, appearing to be in a hurry.

Glancing furtively around, the driver selects a spot out of sight of the road and urinates on the ground.

Describing his behaviour as "really disgusting", Eavestaff told the Herald she was shocked when she saw the video.

"It's really disgusting I reckon.

"It wasn't a garden he peed on, it was actually our hose and our concrete.

"I just couldn't understand it."

Eavestaff said she was at home when it happened and regretted not seeing the notification from her camera earlier.

The motion-sensor camera sends a message to her cellphone when it is triggered and allows her to speak through a speaker to the person who has triggered it.

"To me it's disgusting and it shouldn't happen".

Following Herald inquiries, Eavestaff said her husband had been contacted by a regional manager who had apologised for what the video appeared to show and promised that the driver had been taken off the road.

The manager said that the driver had offered an alternative explanation for what was seen on the video.

NZ Post chief operating officer Brendon Main admitted that NZ Post "hadn't done a good enough job" in contacting Eavestaff following her complaint and confirmed that the driver had been taken off the road while an investigation was completed.

Main told the Herald he was unable to comment on specifics because the case was now a contractual matter but said: "If what it looks like is happening on the video is the case it's extremely disappointing.

"I can't pre-determine the outcome of a conversation we're going to have with a contractor, but needless to say we have apologised to the customer because if what is shown on the video, through that process, is deemed to be what it looks to be we unreservedly apologise to the customer.

"That is not the standard we expect to hit, we apologise for that."

Eavestaff said she spent a long time behind the wheel in her role driving people with disabilities in a van.

"When I'm out and about I can't just go anywhere. You can't do that. I mean, I'm no prude or anything like that but it is disgusting." 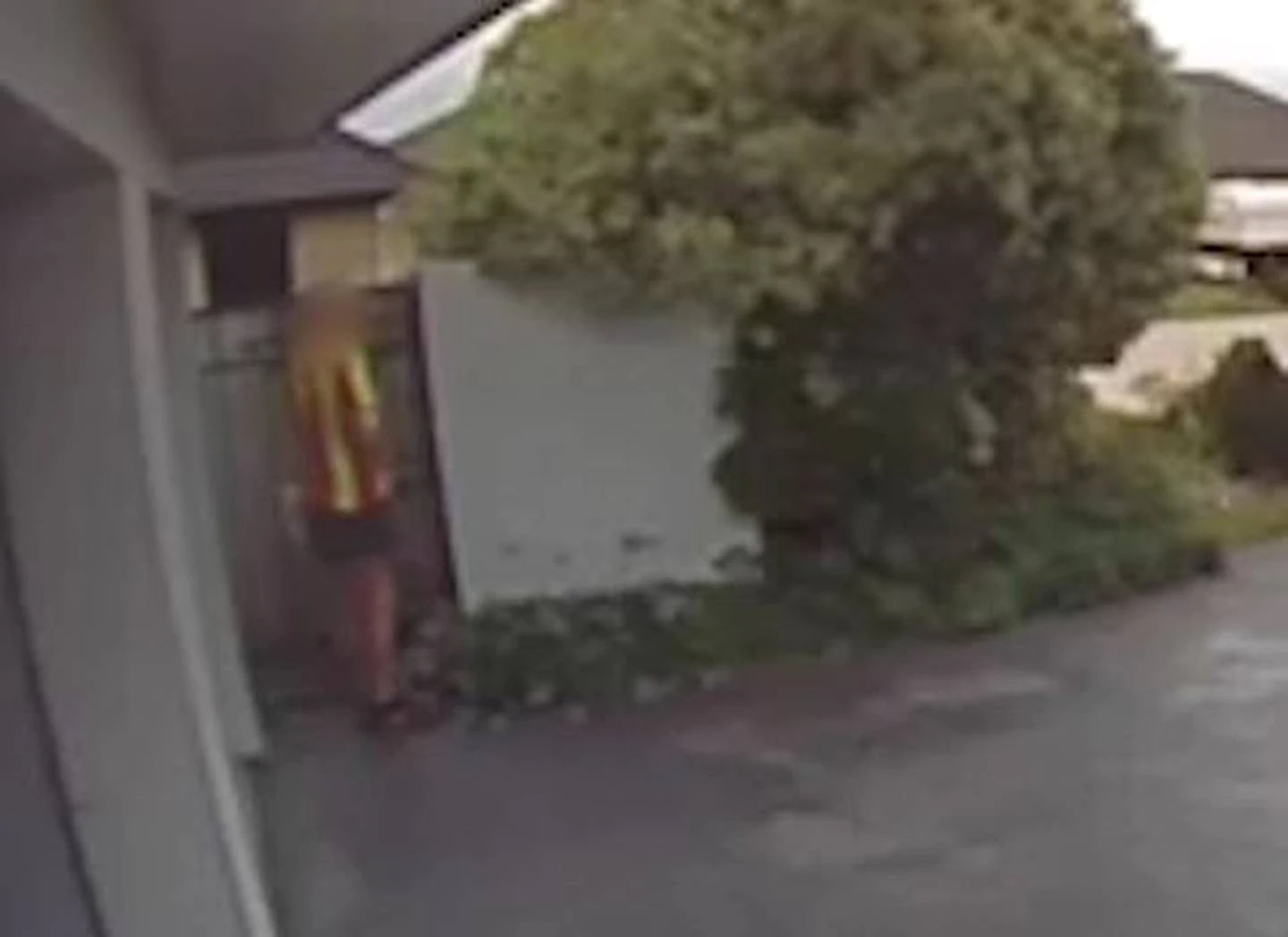 The driver thought he couldn't be seen. Photo: Supplied
Asked whether there could be any mitigating circumstances that could explain his behaviour, Eavestaff disagreed and noted that the NZ Post depot is situated nearby.

Main agreed, telling the Herald the depot was two minutes drive away and there was "no excuse" if it "turns out to be what the video looks like".

Eavestaff said she had lost trust in the driver, who regularly delivered packages to her home.

The family installed the camera last year, but the driver has been delivering to the house before that and Eavestaff told the Herald she was worried that this wasn't the first time he had used her property as a toilet. 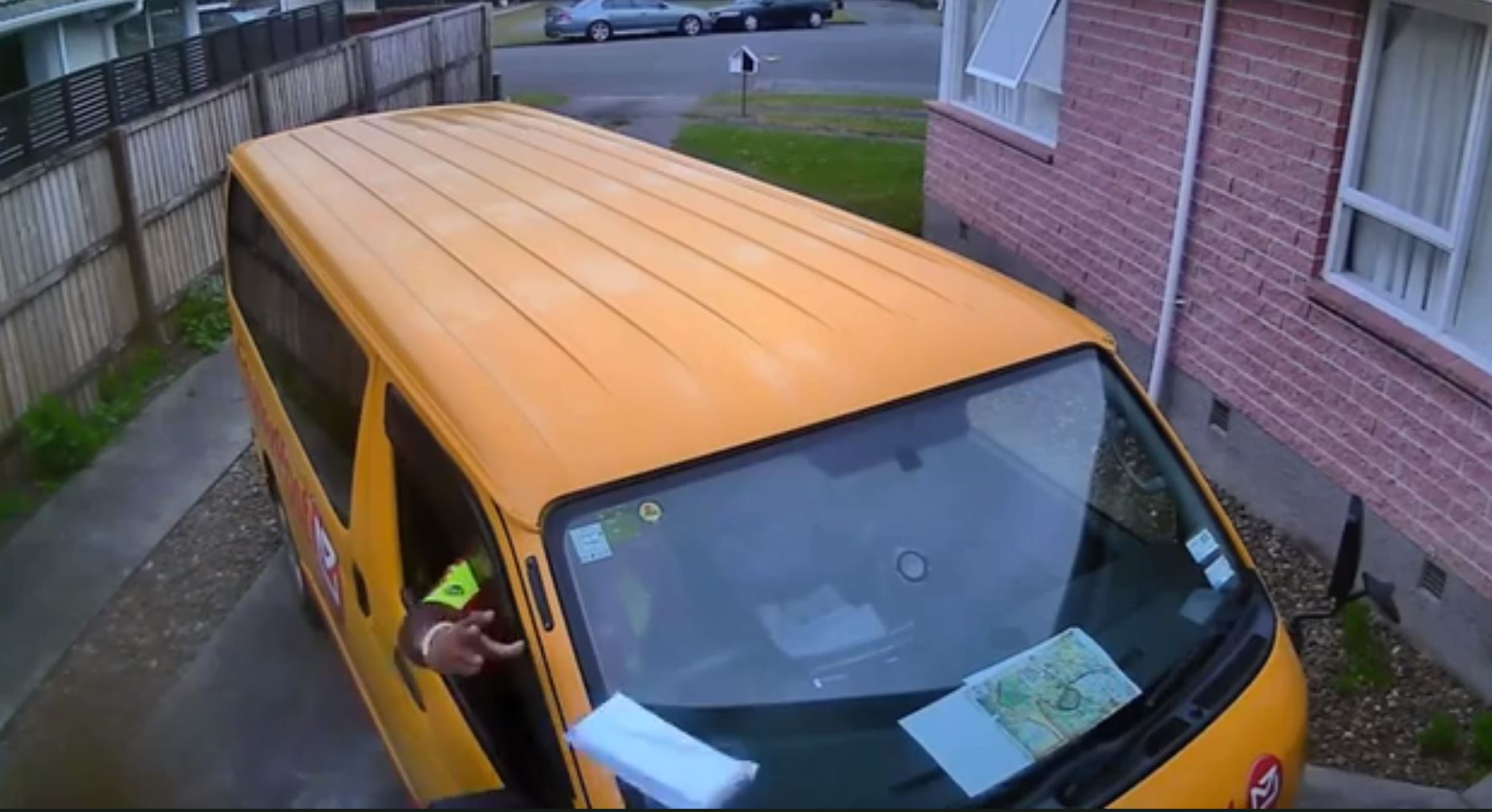 NZ Post has apologised after footage of the delivery went viral. Video image: @OptimusPrimera
Yesterday, the Herald reported on video showing a courier driver throwing a package from his van.

A security camera caught the courier tossing the delivery from the window of his van rather than walking a few steps to the house.

The video showed the van drive up the property's driveway before the courier scans the package and throws it in the direction of the house before reversing away.

The package's recipient shared the video to Reddit with the caption "Thanks, Courier Post" and revealed that the package contained computer parts.

NZ Post apologised after the footage went viral, with a spokesperson saying they wanted to "sincerely apologise" for the "mishandled delivery".

The video was the latest in a series of videos showing NZ Post couriers being less than careful with their deliveries.

In February last year, NZ Post issued a near-identical apology and again quoted their "high service standards" after video showed a driver using the same throwing technique to deliver a package to an Auckland address.

Then, in April, courier drivers were caught crudely throwing packages into their vans on Auckland's Waiheke Island.

Main acknowledged it had been a tough week for NZ Post but defended the organisation, saying they deliver 85 million parcels a year and have hundreds of drivers on the road every day who uphold NZ Post's high standards.

"Every now and again we get let down by exceptions like the ones that we've seen but that definitely doesn't represent what our workforce is out there doing".

He told the Herald that NZ Post would be briefing their teams across the country on the importance of meeting the high standards expected of them.

Main said he was personally disappointed to see these recent incidents surface and that NZ Post staff were proud of the organisation's history and would be "hurt".

"We'll make sure this doesn't happen again for the public."