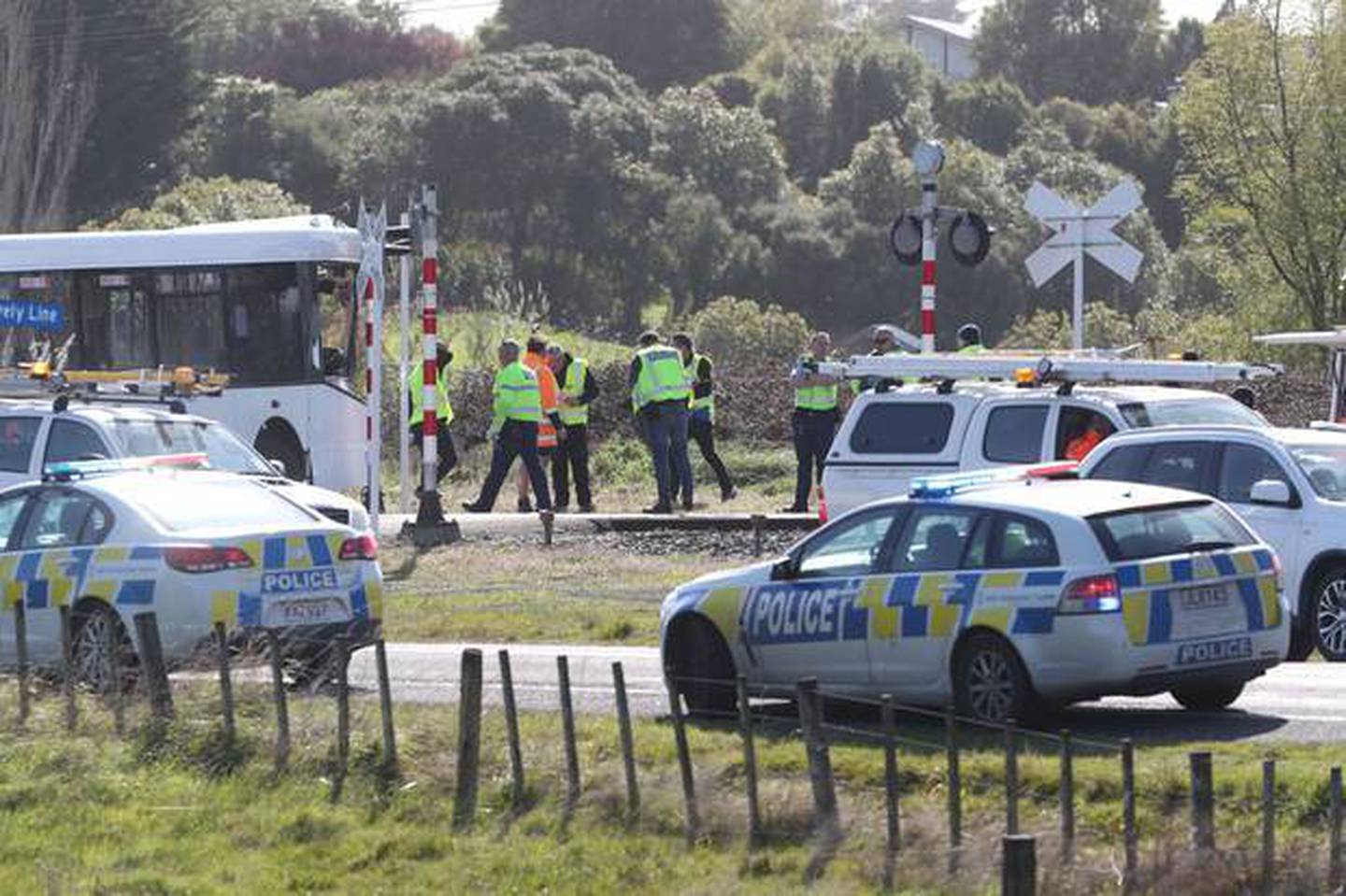 Emergency services at the crash scene yesterday. Photo: NZ Herald
One of the first people on the scene of a fatal crash involving a school bus and a train has described seeing trapped students trying to smash windows to get out of the bus.

Builder Tony Robertson, who was heading to work with his son, was following the bus when it approached the intersection of Railway Rd and Clevely Line in Bunnythorpe near Palmerston North yesterday.

Students from Feilding High School were among the 41 passengers on the bus, which hit a train as it went though a level crossing at about 8am.

"The bus was turning a corner very slowly, it can't have been going more than 20km/h," said Robertson.

"Then they just collided."

As Robertson phoned emergency services, his son and other motorists rushed from their cars to help the students who were trapped inside the bus.

There was nothing they could do to help the driver, who was killed during the collision.

"My son went over ... people were in the bus trying to break open the windows.

"I think one of the passengers got the tool inside the bus to smash open the windows."

Some pulled out coats and blankets for the shaken school students, he said.

"Everyone just stopped their vehicles and pitched in and helped ... one guy got his first-aid kit out."

Robertson said he didn't see any passengers seriously injured, but many were shaken and in shock.

St John said 40 patients were assessed after the crash - some at the scene and others at hospital.

Seven people were taken to Palmerston North Hospital for treatment, with injuries ranging from minor to moderate.

A MidCentral District Health Board spokesman said one student remained in hospital last night in a stable condition.

The company the bus driver worked for, Uzabus, said in a statement: "All of us here at Uzabus are deeply saddened by the loss of one of our colleagues who was involved in the accident this morning.

"Our team has been on site assisting the passengers and police [and] we are thankful the passengers on board at the time did not suffer any significant injuries."

KiwiRail chief executive Greg Miller said the company was shocked to learn of the collision.

The train driver was shaken but physically unharmed and being supported by staff on site.

He was the only person on board the train, which was heading to Whanganui to collect log wagons.

The Transport Accident Investigation Commission has opened an inquiry.

"The investigation team have expert knowledge of train operations, engineering and maintenance," he said.

"Their initial work will include inspecting the locomotive and the bus, mapping the site, examining rail systems such as the signals, examining vehicle components, seeking any recorded data from the vehicles' electronics, and obtaining maintenance records."

The level crossing was reportedly protected with flashing lights and bells, Kozhuppakalam said.

Police described the crash as "extremely distressing" for all those involved.

Rail safety charitable trust TrackSAFE NZ said it was saddened to hear of the crash.

"Our thoughts are with everyone affected, including whānau and friends of the deceased, passengers, emergency services, the locomotive engineer and other railway staff on site," Foundation manager Megan Drayton said.

The crash was "an absolutely tragic reminder of just how serious the outcome can be when a heavy vehicle collides with a train", she said.

Drayton said there were around 3000 level crossings in New Zealand and trains always had right of way.

"We strongly urge all motorists and pedestrians to be highly alert when crossing railway tracks, always look both ways for trains along the tracks before crossing and obey all signs and signals at the crossings."