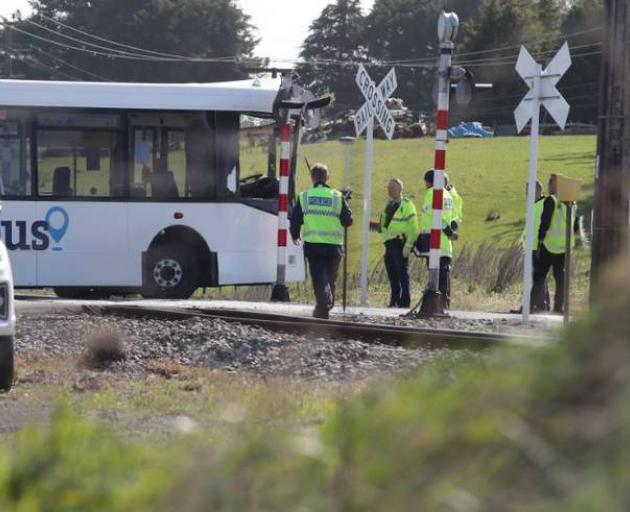 Police at the crash scene. Photo: NZ Herald
The driver of a school bus involved in a crash with a train near Palmerston North this morning has died.

Police have confirmed the female driver died in the crash. The vehicle had been heading for Feilding High School.

Six people were taken to Palmerston North Hospital for treatment, with injuries ranging from minor to moderate, a St John spokeswoman said.

Police said initial indications were that there were "serious injuries", but later clarified no children had been seriously injured.

"However some are being treated for minor injuries. The total number of children on the bus is being determined."

Some children had to be pulled from the wreckage through a bus window.

Four ambulances and a rapid response unit were at the scene.

The crash has forced the closure of the North Island main trunk line between Marton and Palmerston North.

Emergency services were called to the intersection of Railway Rd and the Clevely Line, in Bunnythorpe, just after 8am.

"KiwiRail staff are on site, working with emergency services and supporting the train driver, who is physically unharmed but naturally shaken by the incident.

"We will work closely with agencies in any investigation but for now the priority is allowing emergency services to do their job."

KiwiRail would be offering support to the schools involved and the bus company, Miller said.

The level crossing was equipped with flashing lights and bells.