WorkSafe launched its investigation immediately after the volcanic eruption on the island off the Bay of Plenty coastline on December 9 last year.

Forty-seven people were visiting the site at the time, mostly tourists. The eruption led to 22 deaths.

Prime Minister Jacinda Ardern said this afternoon that government agencies GNS Science and the National Emergency Management Agency (Nema) had today acknowledged they were among those charged over the tragedy.

GNS Science monitors volcanic activity in this country, including White Island, and scientists assign an alert level for each volcano. Nema provides leadership in reducing risk, being ready for and responding to and recovering from emergencies.

Ardern described the eruption as a "horrific tragedy" and it was an independent decision taken by WorkSafe to lay charges.

"We need this to be an independent process."

Her message to the families affected was that all New Zealanders' thoughts were with those who experienced loss or injury. "There is no easy process from here."

Nineteen tourists and two tour guides from White Island Tours were among the dead after the volcanic island erupted.

Many more would have died if not for the actions of tour guides, fellow tourists, helicopter charter pilots who flew out to the island in an unsanctioned rescue mission, and then the work of specialist medical teams. Tourists have not been back to the island since.

Volcanic Air, a Rotorua-based helicopter company that rescued people from the island when emergency services were instructed not to, and White Island Tours, owned by  Ngāti Awa Holdings, today also confirmed they are facing charges.

Ngāti Awa Holdings' chairman told the Bay of Plenty Times:  "White Island Tours Ltd has been charged with two breaches of the Health and Safety at Work Act. No employees or directors of the company have been charged," he said.

"As the legal process is ongoing we will not be making any further comment at this time."

Volcanic Air pilot and director Tim Barrow confirmed to the Rotorua Daily Post the company was not yet sure of the nature of the charges and would take time to seek legal advice.

"There's not really too much I can say. I can confirm we are one of the parties that has been charged but we don't know what the exact process is."

Volcanic Air and six other private helicopter company staff members flew their aircraft to the island on the day of the eruption and rescued survivors. Some of those on board died en route to hospital, but many survived.

WorkSafe today revealed details of its investigation, with chief executive Phil Parkes confirming charges have been laid against 13 parties.

Under New Zealand law Parkes said he cannot name them, as they can apply for name suppression. He said the charges conclude the most extensive and complex investigation ever undertaken by the health and safety watchdog.

The eruption was "unexpected" but was not "unforeseeable", Parkes said.

WorkSafe said there are 10 organisations charged under the Health and Safety at Work Act 2015. Nine face a section 36 charge (failure to ensure the health and safety of workers and others) and one faces either a section 36 or a section 37 (duty of a person conducting a business or undertaking that controls a workplace) charge. Each charge carries a maximum fine of $1.5 million.

There are three individuals charged under section 44 of the Act which requires directors, or individuals with significant influence over a company to exercise due diligence that the company is meeting its health and safety obligations under the Act. Each charge carries a maximum fine of $300,000.

The court date is scheduled for December 15 at the Auckland District Court.

WorkSafe had general oversight of tourism operations on Whakaari/White Island.

Under regulations introduced in 2016, it required companies such as White Island Tours and the myriad of helicopter companies that offered tours to the island to undergo safety audits. However, it could not dictate access to the island, as it was owned privately.

Parkes said WorkSafe's investigation did not include the rescue and recovery operation.

At its peak, 28 people were working on the inquiry. The focus in the investigation was on the events leading up to the eruption. He would not comment on whether it was appropriate to take visitors to the island.

The question about whether tourists should have been allowed on the island is a question that will be argued in court, he said. 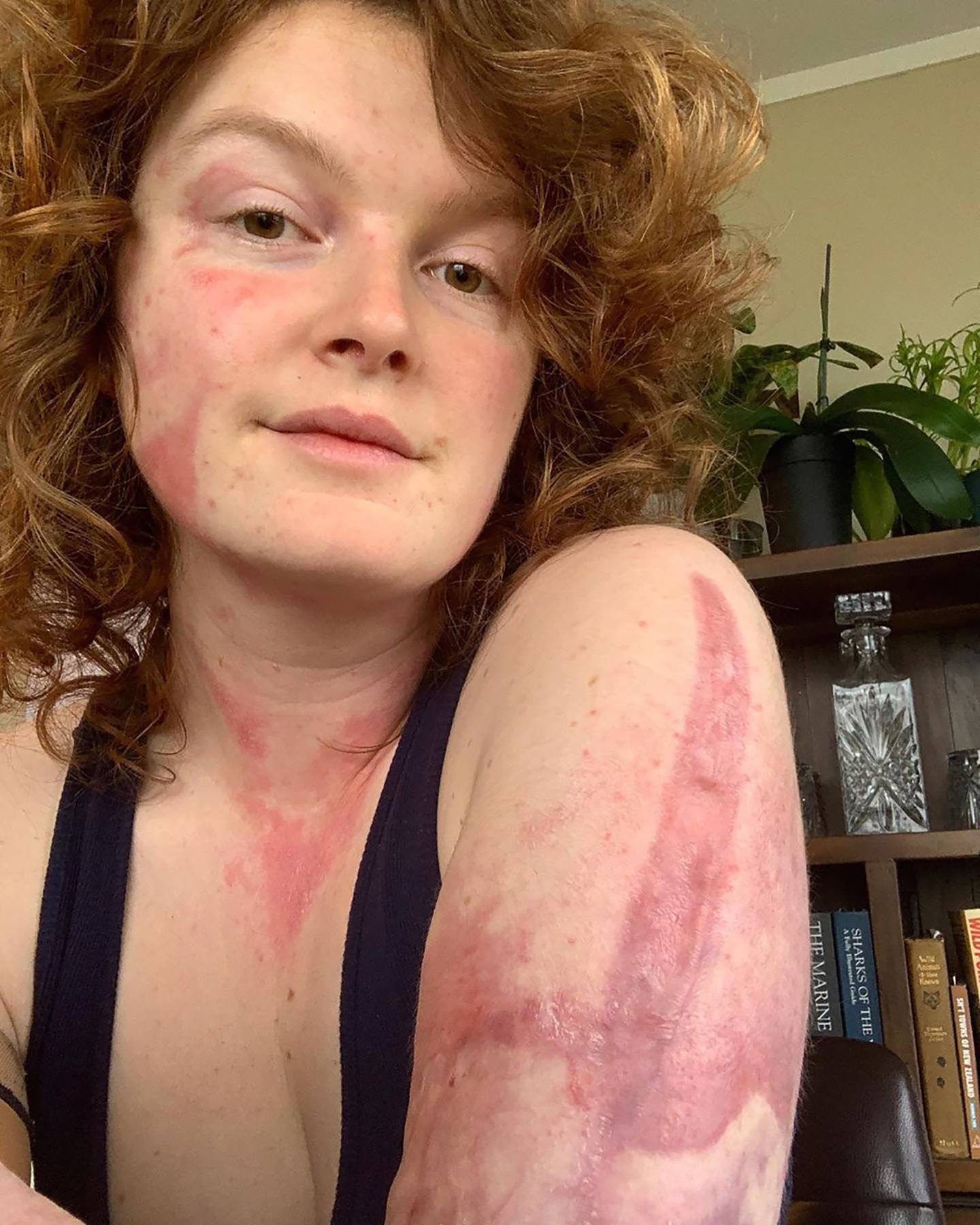 Kelsey Waghorn, survivor from the Whakaari White Island volcanic eruption from 10 December 2019, posted this picture to Instagram 25 May 2020. Photo: supplied

Steve Milbank, the father of one of the two Kiwi survivors of the Whakaari/White Island disaster, said the report didn't tell them much.

He said it didn't reveal who the 13 parties were that were charged as the report noted they needed an opportunity to go before a judge to apply for name suppression.

He said it would be a long time before details of why they were charged would be known and the release of the report was only the first stage.

"We're not going to know anything for a while yet."

Milbank's son, Jake, was a guide and aged just 19 at the time of the tragedy. He suffered horrific burns to 80% of his body and will need treatment the rest of his life.

Numerous lawyers in Australia and the US have been hired by Whakaari/White Island survivors and family and friends of some of the people who died.

Sydney-based lawyer Rita Yousef confirmed to the Weekend Herald she had two confirmed clients, and had also been approached by others affected by the tragedy – including some still receiving hospital care – who want to sue Royal Caribbean Group.

Most of the people killed or injured in December's eruption were on a sight-seeing voyage around New Zealand on the company's Ovation of the Seas cruise ship. Royal Caribbean Group is the world's second biggest cruise operator.

Yousef, who specialises in travel law and public liability for Stacks Goudkamp, said the actions she was looking at were definitely not the only ones that would be seeking financial redress for the tragedy.

"I have heard there are other law firms who are taking on these cases as well. They are Australia and American [companies] so far," Yousef said from Sydney.

Yousef said the claims she was working on were restricted to Royal Caribbean Group.

That was because it was understood those who went on the fateful trip to White Island had bought their tickets direct from the cruise line, and not the Whakatāne-White Island Tours.

The crux of their legal case will be on the level of warnings passengers were given by the vessel's crew before signing up for the tour.

A woman who lost her twin brother in the eruption says she is "quite pleased" at news that WorkSafe has filed the charges.

The investigation gave "some relief" to Meredith Dallow, the twin sister of Gavin Dallow who lost his life in the eruption

"I'm not surprised that there have been charges laid and I'm actually quite pleased to be honest."

Adelaide-based lawyer Gavin Dallow (53) and his 15-year-old step-daughter Zoe Hosking died when the volcano erupted underneath them on December 9.

Gavin was farewelled a month after the eruption, when more than 600 people attended his funeral at the Adelaide Oval.

Today, Meredith said she was assuming who had been charged at this stage, but the maximum fine of $1.5 million was "better than nothing".

"I'm glad the WorkSafe investigation went ahead and there is an outcome but it doesn't really put closure to things."

Meredith did not believe closure would come until the court cases and coronal inquest were over, but she was thankful the WorkSafe report was released now rather than next week, around the anniversary of the eruption.

"It does give us some relief especially as we come close to the 12 month anniversary.

"Did the operators fulfil the expectations around health and safety audits and so on? The question may well be was that regime itself adequate and did WorkSafe do the job," Ardern said.

In June, it was revealed that WorkSafe's investigation team included 27 staff members. Six months after the eruption, NZME also revealed that a former police sergeant and Whakatāne district councillor said he had raised concerns about tourists on White Island before the deadly eruption.

Emails provided to NZME and an interview with Russell Orr – who served 21 years in the police before being a councillor on the Whakatāne District Council between 2004-2019 – showed he was worried as early as 2013.

An email from then showed he requested that council staff make sure risks were being "conveyed fully" to tourists, fishermen and other visitors to the island.

Orr requested in one email: "If the risk is 'unacceptable' that business and economic issues do not sway us from making the obvious decisions needed to protect lives."

Orr told NZME that as far as he was aware no action had been taken after the meeting. "Informally I was told [by council staff] council had no jurisdiction, that it wasn't in our area."