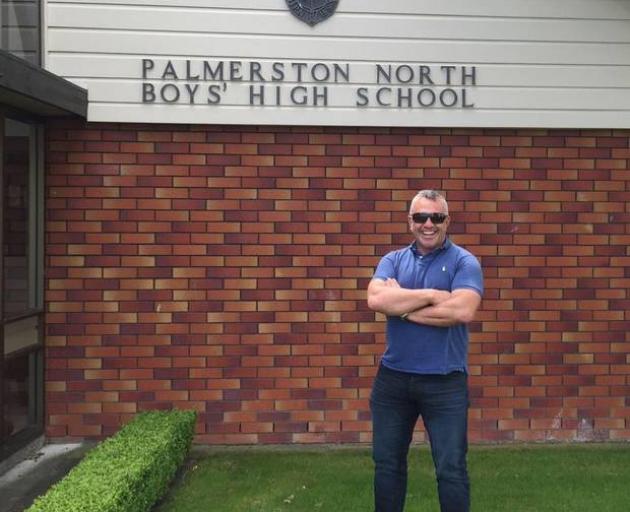 Matt Ratana posing outside his old school in a photo taken in 2017. Photo / Facebook via NZ Herald
A policeman shot in a south London police station was an expat New Zealander.

Matt Ratana died after he was shot by a person being detained at Croydon Custody Centre at 2.13am on Friday local time.

"It is now my sad duty to confirm that our colleague who was killed was 54-year-old Matt Ratana, a custody sergeant," she said.

"As a colleague, he was big in stature and big-hearted, a friendly, capable police officer.

"A lovely man, highly respected by officers and staff, and by the public, including suspects he arrested or dealt with in custody."

He is survived by a partner and an adult son from a previous relationship.

Ratana was treated at the scene by officers and paramedics and was taken to hospital, but died overnight.

A murder investigation was underway and officers were working at several crime scenes to secure evidence and establish what happened, Dick said.

The investigation would also look into how the suspect, a 23-year-old man, was able to get a gun into the police station.

The Independent Office for Police Conduct said the firearm used was a non-police issue and a revolver had been recovered from the scene.

Ratana went to school at Palmerston North Boys' High School before attending the University of Otago where he played for Ravensbourne RFC.

Recently, Ratana had been a coach at East Grinstead Rugby Club where friends described him as "inspirational" and "larger than life".

"He helped out at the club a lot. We lost funding and he came in and helped us," Ratana's friend, Paul, told Sky News.

"He was inspirational - so vibrant, so bubbly, larger than life. He will be a huge loss to the club.

"The man was a machine. He was at training last night from 7 to 9pm. That's the last time I saw him. He was due to retire soon and was looking forward to it."

Police stations across the UK are flying their flags at half-mast and officers also held a minute's silence to honour Ratana.

Ratana joined the Met in 1991 and was captain of his recruit training class.

He was posted to Charing Cross where he worked as a constable on the streets of the West End and Westminster in various roles.

Later, he worked with the Territorial Support Group and in Hillingdon.

In 2010, he worked as a sergeant in Hackney in the response team and in neighbourhoods, Dick said.

"Five years later, in 2015, he moved to Croydon, where he worked in response, in neighbourhoods, and then our detention command," she said.

"In all, nearly 30 years spent as an uniformed officer serving the public of London."

The suspect was arrested by regular patrolling officers for possession of ammunition and possession of class B drugs with intent to supply in Pollards Hill after a stop and search.

He remains in hospital in a critical but stable condition.

CCTV and body-worn video has been retrieved from the incident and the footage is being reviewed in detail.

The Met is working closely with the Independent Office for Police Conduct.

Dick said speculation about how the incident occurred was unhelpful at this time, but they would establish the facts.

"Every day, the Metropolitan Police arrest several hundred suspects, many of them violent criminals who pose a risk to the public," she said.

"The safety of my officers is a top priority and very close to my heart.

"We are a large, professional, resilient, and very experienced police service.

"As we mourn the loss of a much-loved colleague, senselessly killed, be under no illusion that our resolve to protect the public and to tackle violent crime – whoever may be responsible for it – will be undiminished."

The Independent Office for Police Conduct says the suspect was handcuffed to the rear after he was arrested.

IPOC regional director Sal Naseem said he was transported to Croydon Custody Suite in a police vehicle, then escorted into the building.

"He remained handcuffed to the rear and seated in a holding area in the custody suite," Naseem said.

"His handcuffs remained in place while officers prepared to search him using a metal detector.

A non-police issue firearm, which appears to be a revolver, has been recovered from the scene. Further ballistic work will be required.