As the world paused to remember Prince Philip, two New Zealanders played a part in his final farewell - at his request.

There were just 30 mourners allowed inside St George's Chapel on the grounds of Windsor Castle due to continuing  Covid-19 restrictions in Britain.

Just four voices filled the chapel on Saturday afternoon (local time) to farewell the Duke of Edinburgh, who died on April 9 at the age of 99. 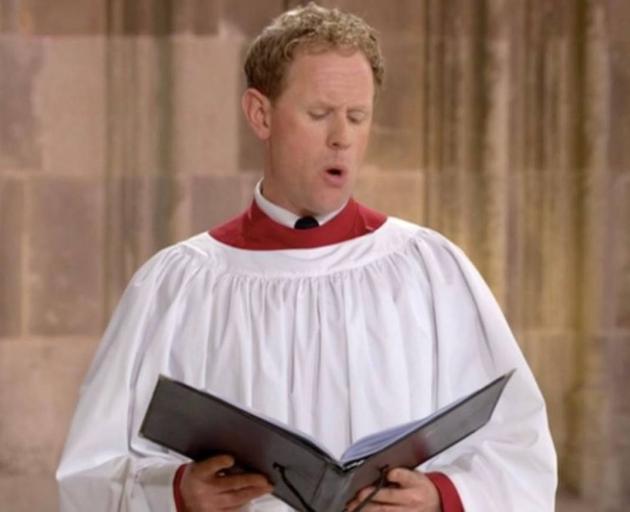 The choir at Prince Philip's funeral included Kiwi-born tenor Nicholas Madden. Photo: Twitter
Three lay clerks of St George's Chapel Choir - singers who are not members of the clergy - were joined by classical soprano Miriam Allan to perform the programme, which included the seafaring hymn Eternal Father, Strong To Save.

Among the quartet was New Zealand-born tenor Nicholas Madden, formerly of Dunedin, who is a member of the Queen's Six, a classical music group established in 2008 on the 450th anniversary of the accession of Queen Elizabeth I.

Philip, who was a long-serving member of the Royal Navy, wanted a distinct military flavour to his funeral and one of his wishes was for defence advisers from around the world to be present.

Positioned in the Horseshoe Cloister of Windsor Castle, a Kiwi representative was present to pay his respects.

Hayward told One News it was an honour to represent New Zealand and our Māori heritage at such an event.

"I was conscious I was the only Kiwi there.

"To wear the kahu hururu just reminded me what my heritage is and where I come from, the men and women who I have served with over the years in the NZ Defence Force but also our heritage and history, and that's the link for me with the Duke of Edinburgh."

He said he admired Prince Philip for his ability to connect with the armed forces and the service he had given to New Zealand and the Commonwealth.