Officer shoots himself in buttocks 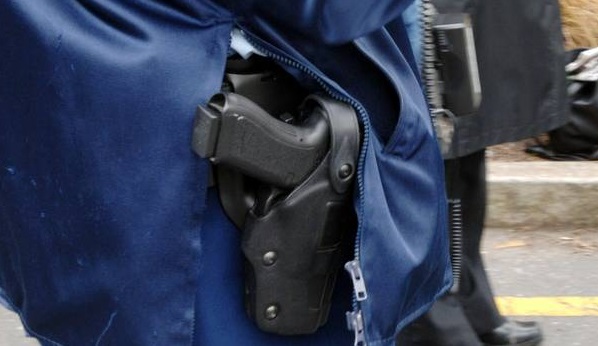 A police officer was injured on a training course after putting his pistol back in the holster. Photo: NZPA via NZ Herald
A police officer is off work after shooting himself in the buttocks with a Glock pistol.

He was putting the firearm back in its holster when the gun went off.

The accidental discharge happened last week on the firing range at Police College where the officer was on a specialist training course.

"The officer was not badly injured and is expected back to work at their home station later this week," said Inspector Dave Rose, the manager of Tactical Training.

He added the police will keep looking into the matter to determine what other lessons could be learned.

"The live round went through an internal wall into an office and embedded itself in an external wall," the IPCA wrote.

No criminal charges were laid but an employment investigation concluded the officer's actions amounted to misconduct.

Any internal disciplinary action remains confidential process but the IPCA agreed with how the police handled the matter.

But the accidental discharge of weapons have led to criminal charges being laid against police officers in the past.

A Hastings man lying on the ground, arrested in handcuffs, suffered serious injuries when the rifle being carried by a member of the Armed Offenders Squad fired.

The safety lever had been knocked out of position, so the rifle discharged when it bumped against the AOS officer's gear. The bullet hit the arrested man in the shoulder.

He was charged with careless use of a firearm causing injury, but was acquitted at trial in 2016 and granted permanent name suppression.

Figures released by the police in 2016 showed firearms had accidentally fired 12 times since 2010, or twice a year.