Watch: 'A complete shambles' - Nats take on Govt in the House

After an ever-so-brief period of campaigning, MPs from both sides of the political aisle are this afternoon back in the House.

Prime Minister Jacinda Ardern yesterday recalled Parliament after delaying the election for four weeks, due to the new Covid-19 outbreak.

This means that MPs – who were out campaigning – needed to come back to Parliament, despite the fact the House had already adjourned.

That is, MPs who are not in Auckland which is under level 3 lockdown.

The action began at 2pm.

National leader Judith Collins asked Prime Minister Ardern about advice she had received on how Covid-19 got back into New Zealand.

She also asked about any weaknesses.

Ardern said nothing should be "ruled in or our without evidence".

That's why the Government has gone on a testing blitz.

But the Government has still not identified the source.

On testing at the border, she said there was an issue of "coding" when staff members went to their GPs.

But there has been a lot of testing since then.

The Government set an expectation that testing was being ramped up at the border and in isolation facilities.

But she said PPE and daily health checks are the first line of defence for workers.

Collins then pressed if she stood by her statements about safety of frontline staff.

Ardern said Cabinet agreed to fund a testing strategy – that was what she was referring to when she made the statements.

She said testing in managed isolation facilities was not as comprehensive "as we expected" or what Cabinet had asked for.

Ardern said there has been no clear link to the border and the new cluster.

But she said people at the highest risk were being tested first.

So far, 90% of all MIQ personnel have been tested.

Asked about Winston Peters suggesting there was a link, Ardern said that was a question for Peters.

She said on July 22nd, the Government mandated all MIQ staff need to be tested.

Speaking to media this morning, the National leader said she was going to provide evidence that would prove Ardern is "entirely wrong" about her managed isolation staff testing claims.

Both Ardern, and Hipkins, have said that the reason testing was lower than they had expected was because some staff were refusing tests.

Collins, however, said that she had spoken to staff working at the Jet Park quarantine facility who said that, in fact, they had not been offered tests.

Collins is expected to elaborate on this information and call on Ardern to release the communications between health officials and senior staff at Jet Park. 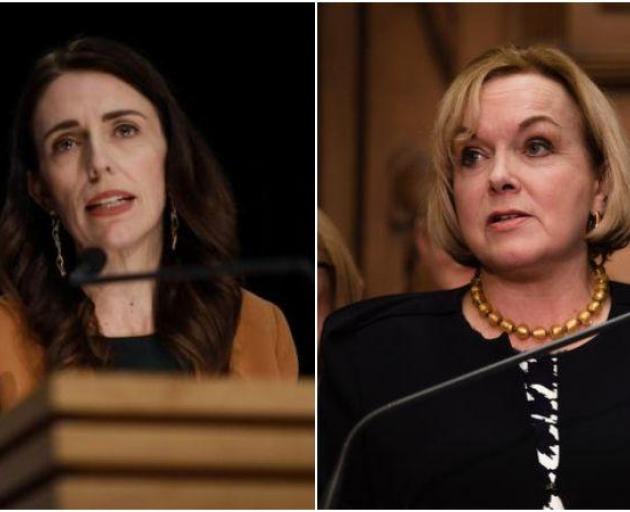 'Blind to risk ' - Seymout to Govt

Speaking to the House, Act leader David Seymour said it was the role of the Opposition to offer constructive criticism when needed.

He said that was easy, because there have been "so many basic failings".

He said there were "102 days of Covid freedom" that the Government should have been using to make sure the system was safer.

But said the Government spent time instead "doing a little dance" and doing a "victory lap".

"We chose to use the time for self-congratulations and encouragement, rather than improvement.

"That is why we are here today," he said.

He called on the Government to use a "wellbeing" approach to the new lockdown.

He said he had heard about increased numbers of suicides in Queenstown.

"Lockdowns are incalculably bad for wellbeing."

He said New Zealand needed to learn to live with Covid-19.

That means learning to live with Covid being endemic in the world.

New Zealand needed to be "smarter" rather than again using lockdowns.

New Zealand needed to look to Taiwan, he said.

"We should have taken a leaf out of their book," Seymour said.

He said it was "unforgivable" that the Government has failed to prepare, while Covid-19 was not in the community.

He said there needed to be more use of the private sector when it comes to helping fight the virus.

He was critical of the Ministry of Health.

He said the Government is meant to set enforcement, not "trying to run everything".

Seymour said there was a "blindness to risk" which, he said, was "madness".

"The opportunity is to do so much better."

He said New Zealand needed to move away for "blunt and costly lockdowns".

Greens co-leader James Shaw said a new outbreak was "always on the cards".

He said no system was perfect.

"It was actually the very same people who suggested that we opened the border to Australia… who are now saying the precise opposite."

That was an apparent dig at National.

He said the week, the Government has shown that it would do "whatever it takes" to protect the community.

He said the Government has acted rapidly to contain the outbreak.

Shaw commended the Prime Minister for her leadership.

He said delaying the election was an "extraordinary step".

He said everyone in the House was hoping to be campaigning at the moment.

But that did not eventuate.

He challenged National and Act's points that New Zealand was not prepared for the outbreak.

"We did prepare for it, and we are ready to work through it."

He said because of the actions of the Government, New Zealand is safer.

"The truth is, we cannot do it alone."

He called on every New Zealander to work together to stamp the virus out.

He praised Reti's speech in the House, which he said was "reasonable" and to the point.

Shaw praised all the workers on the frontline of the Covid-19 response.

"Every action that these people are taking is what will make the difference."

He said thanked the people of Auckland for their sacrifices during lockdown.

Shaw said he was confident that New Zealand can beat the pandemic for the second time.

National's finance spokesman Paul Goldsmith said the reemergence of the virus was putting "intense pressure" on New Zealand; both communities and the economy.

"There are huge consequences for that."

But he said it has been puzzling to and "annoying" to New Zealanders that testing at the border has been so lax.

He said it wasn't good enough for Ardern to say she throught that more tests were being done at the border.

He said there was "dysfunction and confusion" within the Government over this point.

"If you're plan is elimination, you have to be vigilant," he said.

Goldsmith was not confident that the Government was, in fact, being vigilant.

He said what has been seen over the last few days was a "complete shambles".

He said the suggestion that the Government has planned for this regional lockdown has left many New Zealanders confused, given some of the issues which have been detailed over the last few days.

He said the Government should have done more preparation.

"There has been an enormous amount of complacency."

He said there was an element of self-congratulation within the Government – this meant they were not prepared for the new lockdown, he said.

"What we hope from this Government is that they will learn a lesson from what has happened."

Goldsmith did, however, say National did support the extension of the wage subsidy.

But he said the impact on the economy over the last few months has been "colossal".

He pointed the finger at high levels of debt.

"It shows we're under enormous pressure as a country."

National had "every confidence" that New Zealand can get itself back on track, but that requires no "job friendly policies".

This is our second wave - Reti

National's health spokesman Shane Reti said the new outbreak was "the cards we have".

He said all frontline health workers deserve respect and praise from New Zealanders.

"This is our second wave, such was learned in our first brush with coronavirus."

He said the opposition would help the Government when the "ball is dropped".

He said routine mask-wearing is effective and called on people to wear one when they can.

"We ask that there is PPE available to everyone know needs it."

"This is a good discipline."

He asked all New Zealanders to use the Covid-19 tracing app.

On testing, he urged people with symptoms to "please get tested".

'Testing at the border has been too slow' - Hipkins

He talked of how important it was to go "hard and early" when it comes to New Zealand's economic response.

His speech was brief and mainly summed up what he had announced over the past seven days.

Minister of Health Chris Hipkins said although the Government worked "incredibly hard to prevent" Covid-19 re-emerging in the community, it was inevitable that the virus would come back.

But he said stamping out the virus was still the goal.

"We have done this before, and we can do it again."

So far, more than 100,000 tests have been processed over the last five days.

"That is a remarkable effort."

He said the number of tests means New Zealanders can have confidence there is no widespread community transmission in New Zealand, aside from the one Auckland cluster.

But he said: "Testing at the border has been too slow."

He said that was "disappointing and frustrating".

He continued that the amount of testing so far was "not good enough".

But he said the new testing regime aimed to fix this issue.

Hipkins called on people to download the Covid-19 app – the number of downloads has more than doubled in the past week.

The app now has more than 1.5 million downloads.

"We have a plan, and we're doing everything right to stamp this out."

Hipkins' speech is followed by two speeches from National, one from New Zealand First, one from the Greens and one from Act.

But the headline of this afternoon's question time, which will begin at approximately 3pm, will be Collins' questions to Ardern.

Speaking to media this morning, the National leader said she was going to provide evidence that would prove Ardern is "entirely wrong" about her managed isolation staff testing claims.

Both Ardern, and Hipkins, have said that the reason testing was lower than they had expected was because some staff were refusing tests.

Collins, however, said that she had spoken to staff working at the Jet Park quarantine facility who said that, in fact, they had not been offered tests.

Collins is expected to elaborate on this information and call on Ardern to release the communications between health officials and senior staff at Jet Park.

As well as this, Gerry Brownlee – who has the fourth question this afternoon – will question Housing Minister Megan Woods on the Government's testing regime for frontline Covid-19 staff.

Question number seven belongs to National's health spokesman Shane Reti, who will be pressing Hipkins on his statements on frontline Covid-19 staff testing.