Why conspiracy theories thrive in times of crisis 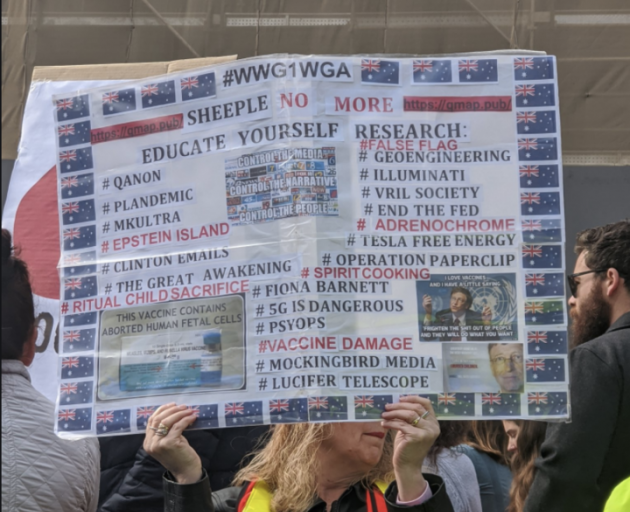 A protestor lists a host of conspiracy theories at an anti-lockdown protest in Melbourne. Photo: Twitter
The idea that 5G networks are dangerous - and even responsible for the coronavirus pandemic - has taken such a hold on people that New Zealand has now seen at least 16 attacks on cell phone towers in the last six weeks.

All the considered science on the subject says the claims about the towers – causing cancer, emitting radiation – are not true. But world leaders from the UK to NZ have had to spell it out anyway.

Worse, putting the towers out of action is endangering the 111 network.

The 5G tie-up with Covid-19 is one of about 100 coronavirus-related conspiracy theories floating around at the moment. Most are not new – they’re old theories twisted to fit new circumstances.

Conspiracy theories go back beyond Roman times, but they really started gaining traction with the advent of new technology.

Auckland University medical sociologist Robert Bartholomew says when AM radio came out in the 1920s there were reports it was affecting the weather. When the telephone became common, many operators claimed the crackling sounds were making them sick.  Travellers on the new train carriages told their doctors they had developed “railway spine”.

As for the machine that made “artificial” ice – freezers got a bad rap at first too for producing the poisonous cubes.

Bartholomew says conspiracy goes hand in hand with uncertainty, and there are literally dozens of theories out there linking 5G with Covid-19. They include that 5G has altered our DNA structure … it’s a biological weapon engineered by the Chinese … that 5G electro-magnetic radiation has weakened our immune system.

“That’s just not true,” he says. “These just don’t make any sense.”

Why are they spreading so quickly?  “During times of crises conspiracy theories flourish because they are incubated in an atmosphere of uncertainty and anxiety. And when it’s viewed as being a personal threat to one’s health, that makes it even more pertinent to people. And that’s what you have right now,” he says.

Normally when there’s a crisis – a cyclone or earthquake for example – rumours and theories get to a peak, and then go down.

“But with Covid-19 it has peaked and it hasn’t got down. And what you get in that situation is a rumour-generating factory,” he says.

Throw in the distrust of Government and big corporations, and we’re at an all-time low.

“Too many people are getting their news from unvetted sources on social media,” says Bartholomew. “It’s never a good idea to get your news from Facebook or Yahoo Answers.

“Like it or not we live in a fake news era where many people distrust the media. And I think we have Donald Trump to blame for that.

“His attack on the truth; claims of ‘fake news’ when he doesn’t agree with someone’s opinion; these things have come back to haunt us.”

We are also living in the age of Photoshop and deep fake videos – it’s enough to erode confidence in what we are seeing, and many people don’t know what to believe.

Bartholomew says often those who believe in the 5G conspiracy theories are lumped in with the fringe element or people who have mental health issues, but “it’s often just normal, healthy people who have issues like this,” he says.

“Human beings are always looking for hidden meanings and connections because our brains are wired to find patterns where none exist.”