Opinion: Most stolen car in NZ: I took the risk - and it got nicked 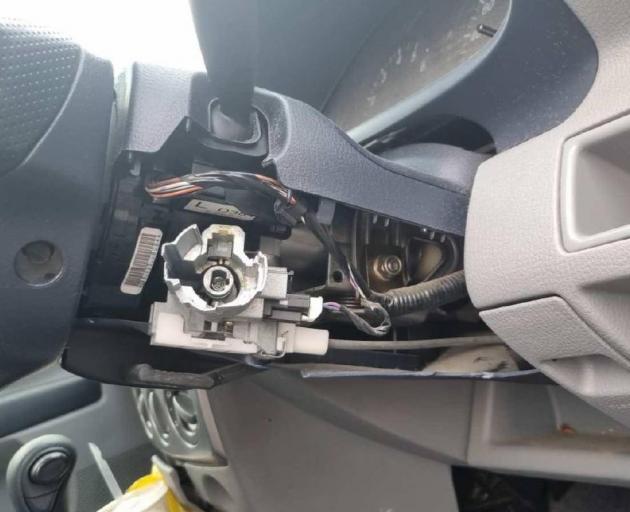 The thieves damaged the ignition. Photo: Supplied
OPINION: I knew the Mazda Demio was the most stolen vehicle in New Zealand, but I decided to roll the dice.

For three blissful years, my risk was paying off. Apart from the morning I found a box-cutting knife blade between my window and the door, things were fine.

If anything, the knife incident made me more sure my Demio was impenetrable, the Titanic of cars if you will.

At the end of January this year, I moved out from a well-known student area in Christchurch to a more affluent suburb, St Martins.

"Wow, what a nice area" and "You'll have no trouble there," I was told.

Two months later, in the middle of last month as I prepared to head for work, I stepped out of my flat and onto the street and my beloved Demio was nowhere in sight.

I always parked her in the same spot, right outside of the house so there was not much of a search party required. She was gone.

The only sign left was the shattered glass glistening on the road.

My first call was to my boss. Then I got to work calling the 105 police non-emergency number.

That was a mistake, it was much quicker doing it online. Twenty minutes later and I was underway.

After filling out an online form for my missing car I was given a reference number that I could pass on to my insurance company, which I did shortly after.

And then it dawned on me. I had just put $60 petrol in the day prior. I cursed the thieves.

It all felt very surreal, I had never had a car stolen under me before and like a teenager, I felt invincible, until now.

It was two days later when I got the call from the police saying that my car had been found abandoned roughly 10 minutes away in Linwood.

It would be towed to a safe location where police would try to get fingerprints and then the insurance company would assess the damage.

The culprits had used up all my petrol, only stopping because they ran out. Quite a feat in just two days in my 1.3 litre car.

The damage did not look to be too bad at first, they told me. The back window was broken and the ignition was busted.

But a walk around the car showed there was more damage than first thought.

A few days later I was informed the cost of fixing the Demio would surpass the amount it was insured for.

Police emailed saying they found some fingerprints but they could not link them to anybody.

It was an emotional rollercoaster from start to finish. My luck had run out and so had the Demio's.

After some contemplation, I decided it probably was just too risky to buy another Demio.

The search began for a new car, something of a higher value, with more security.

After about two weeks of looking I settled on a 2011 Volkswagen Polo. A similar engine size which I think is important with petrol prices the way they are.

I have also invested in a steering wheel lock for good measure.

Looking back, I wish it never happened but at least now I'm no longer the owner of New Zealand's most stolen vehicle.