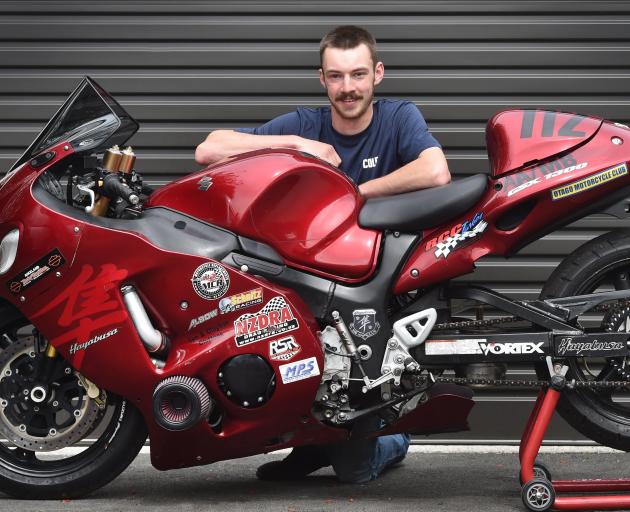 Cole Scammell, with his Suzuki Hayabusa, is all set to compete in the Burt Munro Challenge at Teretonga this week.PHOTO: GREGOR RICHARDSON
He got his first bike when he was 8 and has been trading up ever since.

Cole Scammell is only 23 but he is a wise old head when it comes to motorcycles.

His latest is a 2007 Suzuki Hayabusa, fitted with a turbo system and quite capable of being the quickest bike over a quarter mile in New Zealand.

Scammell has been around bikes all his life, and not just riding them. He is a dab hand with the mechanics of the machines and the one he is set to ride at the Teretonga track in Invercargill tomorrow is seriously quick.

The Hayabusa has been modified extensively since he took possession about three years ago.

He acquired the bike the old fashioned way, through a straight swap — no cash involved.

"I went to the Gore quarter mile and competed and saw a guy with the bike. I liked the look of it and went up to the owner and started talking to him, trying to make conversation," he said.

"The next year I had a Ducati 749 and he was back again with the bike. I got really close again to nearly beating him. So we kept talking and he eyed up my ute and started talking about a swap."

They came to an arrangement — Scammell got the bike and another vehicle in exchange for giving up his Ford FPV Pursuit Ute.

"I got a good deal. It’s what I was after and have just gone from there."

He has gradually been working on improving the Hayabusa — changing the gearing, the intake system and lowering it. It had a stock motor initially, but then he added a nitrous set-up and, over Christmas, he put a turbo on the bike and it now has some serious muscle.

"I always wanted to have a turbo set-up but never had the money. But then I thought just knuckle down, not spend any money and you could do it."

So much of the Christmas holidays was spent out in his garage and he got the turbo installed — costing about $14,000.

He got some immediate payback. He headed up to Christchurch at the end of last month and managed a quarter mile time of 8.85 seconds, getting up to 235kmh.

Now he is heading to the Burt Munro Challenge, although racing on the Teretonga track will not be easy due to it having less traction than a drag strip.

Driving down a track at such speed, he admits there is not a lot of time to think about anything.

"You remember the start and braking at the end but not a lot in between. You don’t have time really."

The sky is the limit for the bike. He hopes to get more horsepower — up to 280 — and at that power, who knows how fast he can go?

What is more amazing is Scammell, who hails from a farm in Gore and now lives in Mosgiel, is not even a qualified mechanic. He is a joiner by trade. He just picked up all he knew by just watching and learning and figuring things out — like Burt Munro himself.

"To me drag racing is the ultimate test of man and machine. If you have worked on the machine and know all about it then you have faith in it." 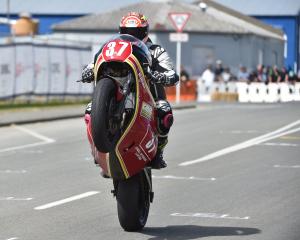