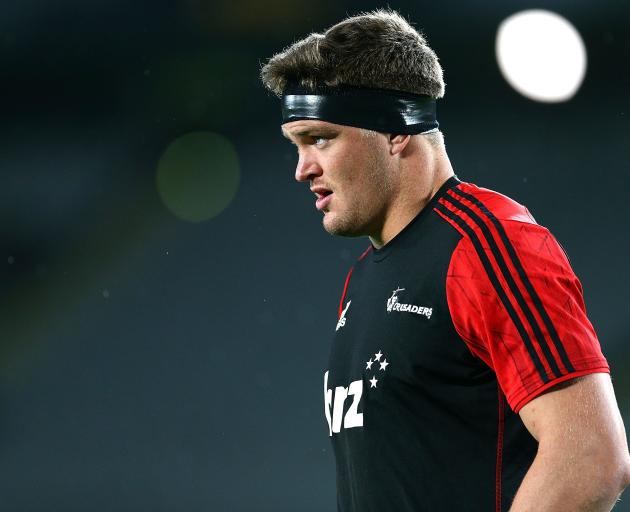 Barrett was announced as the sides captain for 2020 due to Sam Whitelock taking a sabbatical. The announcement comes with the Crusaders unveiling their 38-man squad at Rugby Park today.

"He's well respected by his teammates as well as the coaching and management group, has great character and helps drive our team culture so we see him as a natural fit to captain the side and congratulate Scooter on this exciting opportunity."

With the departure of a number of established Crusaders, including the likes of Matt Todd, Kieran Read and Ryan Crotty, a strong contingent of fresh faces are set to make debuts for the Crusaders next season.

Six of the new players have come through the Crusaders Academy in the form of Fergus Burke, Tom Christie, Inga Finau, Cullen Grace, Brodie McAlister and Dallas McLeod.

The player with perhaps the most interesting pathway to his first Super Rugby contract is Linwood centre Inga Finau.

The former New Zealand under-20 player was part of the Canterbury side in 2016 and 2017 but made the decision to take 2018 off rugby to concentrate on completing a bachelor of sport coaching at Canterbury University.

This year Finau returned to rugby and has been rewarded for strong campaigns at club and provincial level.

Selection in the squad was made even more special for the likes of Christie, Grace, McAlister and McLeod who all came through the UC Championship first XV competition.

Christie was somewhat unlucky not to pick up a full Crusaders contract last year. However, he spent the year training with the team which he said was invaluable to learn from the likes of Todd and Read.

Although there was the temptation to seek chances elsewhere, he said he has no regrets about waiting for the chance which has arrived 12 months later.

"It's hard to say there was no temptation, but I'm a boy who’s grown up in Christchurch and always watched the Crusaders and this province is home to me. So, the temptation was only short-lived because when I sat down to think about it the Crusaders is who I want to play for and at my age, I'm more than happy to wait for that dream to be a reality," said Christie.

Meanwhile, centre/winger Dallas McLeod is also looking forward to turning out for the side he grew up supporting. McLeod comes from strong rugby pedigree in Methven with his father, uncle and grandfather having all represented Mid-Canterbury.

"We'd always drive up from Methven to come up for the games. Back when I was younger that was the best thing ever," said McLeod.

He made the move from Methven to Christchurch to play first XV rugby at Christ's College in year-13 before being picked up by the academy and impressing in his first campaign for Canterbury recently.

Meanwhile fellow loose forward Sione Havili - who spent the last two provincial seasons with Tasman - will be hoping he can become the next great Crusader the Blues let slip away. The 21-year-old is an Auckland Grammar School product but turned out for Tasman after not being selected by Auckland in 2018.

"Growing up in Auckland I always wanted to be a Blues player. I never thought I'd be here with the Crusaders. Watching the Crusaders growing up I always heard a lot of good things about down south being hard-working people, good people and work ethic. I want to be part of this environment to learn," said Havili.

Another Tasman Mako coming south is outside back Fetuli Paea. The 27-year-old has represented Tonga in both sevens and the 15 man game. He is an explosive runner and will be able to fill a number of positions in the backline.

The Crusaders squad will commence their pre-season on November 28 with the All Blacks due to return in the New Year.